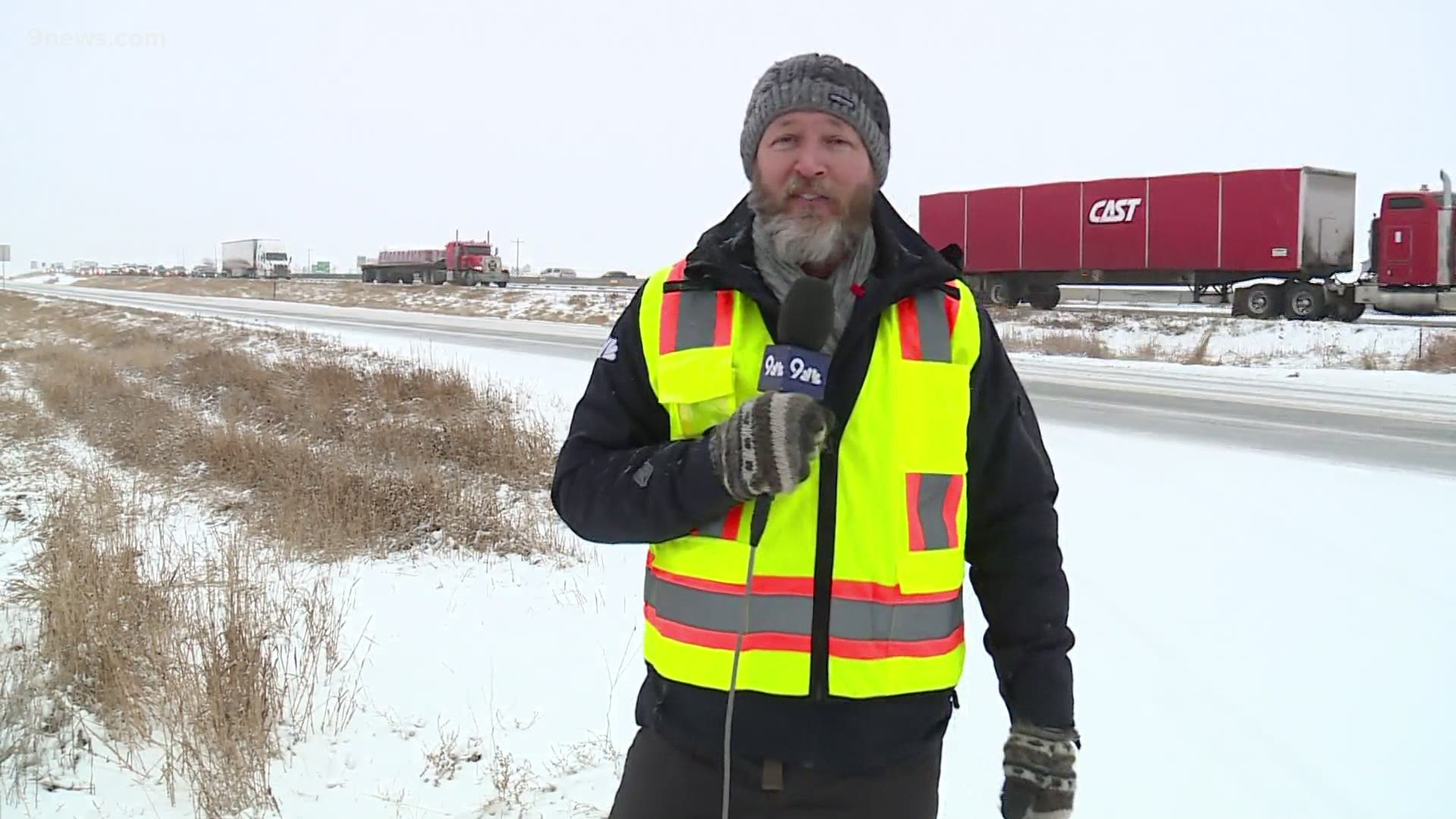 DENVER — A winter storm caused difficult driving conditions across Colorado on Tuesday afternoon, leading to closures and delays on Interstate 25 north of Denver and Interstate 70 in Aurora.

Deputy Chief of Police Services Jeffrey Satur said a Cadillac sedan was traveling southbound when it lost control and started a side spin traveling into the northbound lanes of Highway 287.

The Cadillac was struck broadside, in the driver's side of the car, by a Honda Pilot traveling in the northbound lanes of Highway 287. The driver of the Cadillac, a 34-year-old Berthoud resident, died as a result of the crash, Satur said in a news release.

Satur said five occupants of the Honda Pilot, all residents of Fort Collins, were transported to an area hospital with a variety of injuries and are expected to survive.

Icy road conditions and speed are being investigated as possible factors, Satur said.

A crash south of Loveland led to the closure of the northbound lanes of I-25 as well as some of the southbound lanes for hours. This stretch of interstate has since reopened.

Multiple semi-trucks were involved in that crash, and photos shared by CSP show some vehicles toppled sideways and on the median.

At least six people were transported to hospitals. Their conditions weren't known, a CSP spokesperson said.

Another crash on northbound I-25 happened near CO 119, which is the Longmont/Firestone exit. A 9NEWS traffic camera showed delays in the area as well as lane closures. All lanes of traffic were reopened shortly after 2 p.m., CDOT said.

There was a third crash at milepost 230, which caused two lanes to be blocked. That has since been cleared.

Data from Waze showed that due to all of the wrecks, the drive time to Fort Collins from Denver was roughly two hours – meaning it would take roughly twice as long as usual.

> The video above is a live camera of the traffic resulting from the crash on I-25 at CO 402 south of Loveland.

RELATED: Light snow falls through tonight with highs in the 20s

Additional crashes were reported on US 6 near Federal Boulevard in Denver, as well as westbound I-70 in Aurora earlier Tuesday, where injuries were reported.

I-70 has since reopened in the area.

#APDTrafficAlert Officers are working a crash with serious injuries. The following roadways are CLOSED:
W/B I-70 at Colfax
N/B E470 to go W/B I-70

Multiple highways in the mountains were under the traction law. This included US 285 west of Bailey, as well US 6 over Loveland Pass.

The traction law is also in place for CO 9 on Hoosier Pass between Fairplay and Breckenridge.

Check the 9NEWS traffic map for the latest information about delays and drive times across Colorado.