The unrelenting heat over the past few days proved to be too much for some area roads. 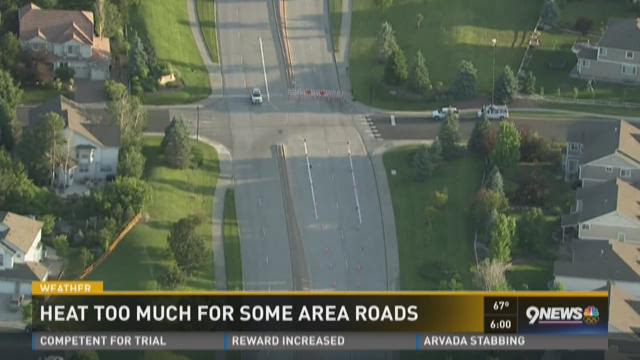 The unrelenting heat over the past few days proved to be too much for some area roads.

Crews spent part of Monday working on two roads: South Buckley Road, near East Peakview Avenue in Arapahoe County, and Parker Road, near North Pinery Parkway. They made temporary repairs to the concrete roadways. What happened there wasn’t just about what was going on with the surface of the road. but mainly what happened underneath it.

On South Buckley, intense heat from above, combined with water that had seeped in underneath the road, caused it to buckle.

“Water got underneath those concrete panels, on top of the clay-type material. The water didn’t have anywhere to go,” said Allen Peterson of the Arapahoe County Road and Bridge Division. “It’s what I call the pressure cooker syndrome.”

That pressure forced the concrete roadway up and apart, which fractured the road. It was a similar story a few miles away on Parker Road, where CDOT crews also had to repair an area where that concrete road also buckled on Monday. Concrete is supposed to be more durable than asphalt, which is why it is used on certain roads.

“Generally, when we build roads with concrete, it’s just for the lifespan,” CDOT spokesperson Bob Wilson said. “It goes a lot longer. Generally, we have a 20-year lifespan with concrete and on a road like Parker Road/State Highway 83, it has so much traffic on it, that it allows us to build a busy urban corridor and not have to go back in there and replace the roadway.”

Asphalt is more flexible, but not as durable as concrete, which is why the materials used on roads around the U.S. vary depending on soil conditions and traffic volume. Experts say, occasionally, the road is simply the victim of circumstances.

“We do see this occasionally, not a lot, but it doesn’t surprise me that we saw it this weekend, after such extremely hot temperatures,” Peterson said.

Arapahoe County officials say a concrete contractor will be out later this summer to make a more permanent repair South Buckley Road, as well as add in some extra expansion joints, to try and make sure they don’t run into a similar problem there again. As for the repair to Parker Road, CDOT said they may also have to replace the concrete panel for a more permanent fix.