In an 'unprecedented effort,' Denver Public Works will be putting deicer on side streets one week after major storm

The highways are looking good following the storm earlier this week, but the side roads are a different story. Here's how Denver is addressing the problem. 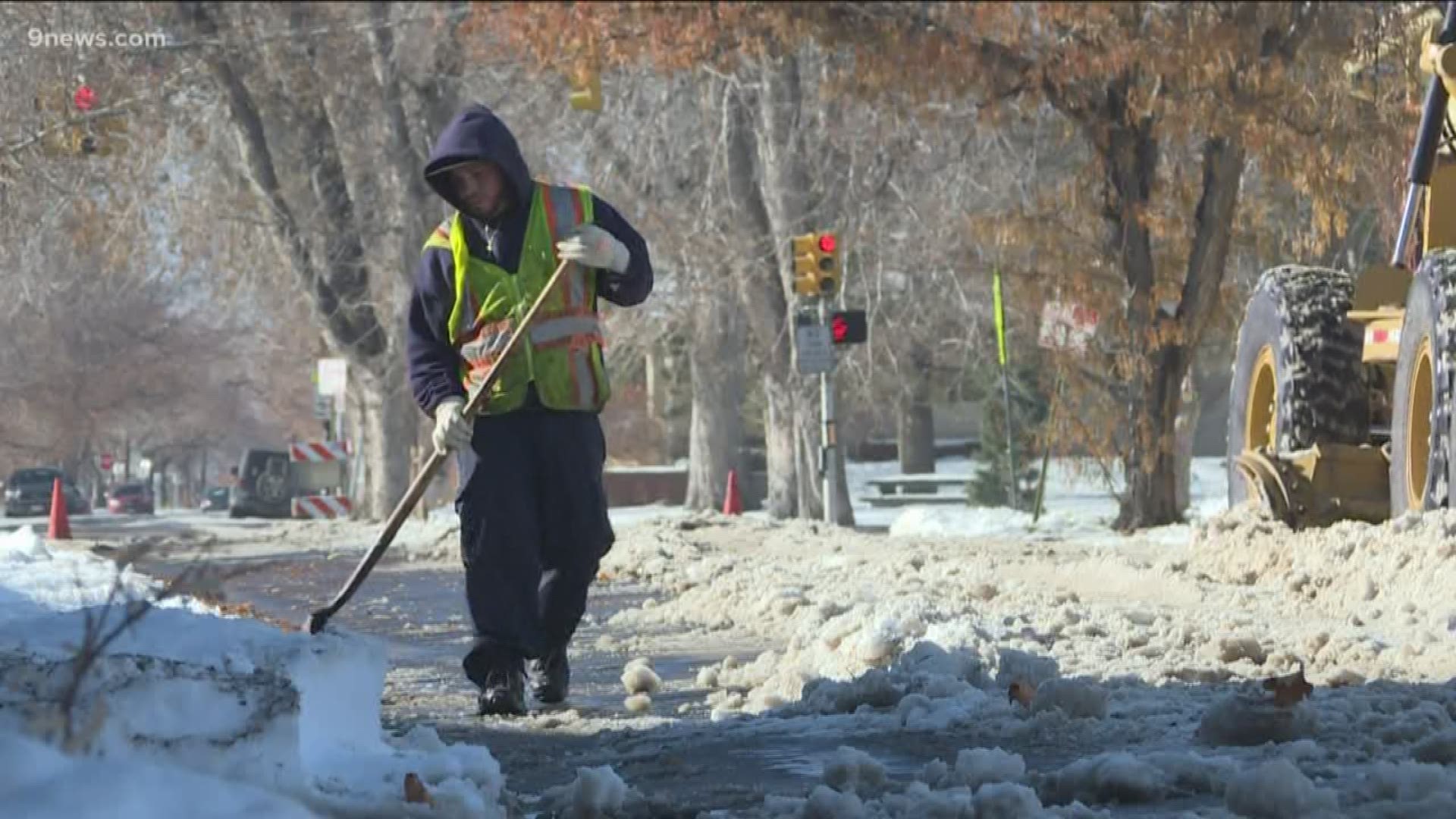 DENVER — Almost a week after a major winter storm dropped nearly a foot of snow on Denver, the city will be deicing residential streets to speed up recovery. Denver Public Works (DPW) made the announcement late Monday afternoon, just hours after the department said adding deicing material to those streets won't be effective.

Eulois Cleckley, Executive Director of DPW, said in a statement that this is an "unprecedented effort" and a departure from their standard operating procedure.

“This most recent snowstorm was particularly impactful due to snowfall amounts, snowfall rates, and low temperatures and we’ve heard people’s concerns about the condition of our roadways,” Cleckley said. “We hope this step of dropping deicer on the side streets shows our residents that we are listening and will take necessary actions to address their concerns.”

The statement also said they will be using 30 plows and dropping deicer on residential roads starting Monday night through Tuesday morning. They said every side street in the city will be addressed.

Cleckley said after this, the city will assess how effective the approach was, although Heather Burke, a spokesperson for the department, told 9NEWS that deicer likely won't make an impact on side streets that see little travel.

"We can't drop deicing material on the side streets like we do on the main streets. It wouldn't be effective," Burke said Monday morning. "Deicer is not a melting agent. It just minimizes the bond between the frozen material onto the pavement, and really what you need is people's tires really breaking up that material, so when a plow comes by, it can remove it. And we don't see those types of traffic volumes on side streets."

When 9NEWS followed up with DPW to ask how this action plan was developed, Burke said they wanted to address residents' complaints "by doing something."

"This is just something we're trying to let people know we're listening. The stuff about deicer needing movement to be effective is still the case," she said.

DPW expects that any ice melt Denver sees tomorrow is more likely to be due to the sun and rising temperatures, than to the deicer.

Burke added that the big plows are the only ones capable of dropping deicing material and likely won't fit on every side street, so addressing each one presents challenges. This kind of response shouldn't be expected after every storm, according to Burke.

Generally, residential streets are a lower priority than major roadways and arteries. 9NEWS reached out to several cities in Colorado, looking for information about snow plowing procedures and how cities responded this week. Denver, Aurora, Boulder and Thornton replied first and here is what we learned.

Denver has a fleet of 68 plows that handle main streets, plus 36 smaller plows ones that handle residential streets.

Aurora has 49 plows, plus other heavy equipment

RELATED: Skiers enjoy a straight-up powder day in the foothills 15 minutes from Denver

Thornton has 16 plows, plus 9 pickups with blades.

Adding chemicals to the road (pre-treating and after)

Denver said the application of deicing materials depends on the characteristic of the snowstorm, and pavement temperatures can affect the effectiveness of deicers (lower temps slow the activation)

Aurora spokeswoman Julie Patterson said Aurora pre-treated the roads there with liquid de-icer earlier this week, then had crews working around the clock to plow through the snowstorm. They continued working into Wednesday, she said.

Denver Public Works said the main streets – the ones carrying the most vehicle traffic – are first priority. Each plow has a set route, which includes arterial and collector streets, and the city also plows around schools to provide safe zones for school children. Denver said residential plows take a single pass down side streets.

While DPW said city crews worked around the clock during the storm and were making great progress on Wednesday, spokeswoman Heather Burke-Bellile added this:

“Given the amount of snow that fell, followed by cold temperatures, it’s going to take some time to rebound from this storm.”

People in Aurora can view snow plan maps online, to see which streets fall under which priority level.

Click/tap here to check out the maps for Aurora

Spokeswoman Patterson explained a technique, saying plows don’t always scrape down to the asphalt. Instead, they leave a small layer of snow to provides more traction, rather than plowing to the asphalt where snowmelt on the road surface can turn to black ice with low temperatures.

Using the sun to help

Denver said icing can occur anytime but is most common on the south side of east-west streets, in gutters, or on streets with a lot of shade from buildings, trees, etc.

Denver said the city has motor graders that can help break up ice, then move it with loaders to the sunny side of the street where it can melt.