LAKEWOOD, Colo. — Both lanes of Interstate 70 between 6th Avenue and Denver West Parkway in Lakewood have reopened following a fiery crash that killed four people on Thursday afternoon.

According to the Colorado Department of Transportation (CDOT), crews removed 2.5 inches of damaged asphalt along a 300 foot stretch of the highway before repaving it.

Westbound lanes of I-70 reopened around 2 p.m. Friday, about 21 hours after Thursday's crash. The highway fully reopened just over 6 hours later.

It was originally estimated that eastbound lanes would not reopen until Saturday.

Four people were killed in Thursday's crash in the eastbound lanes of I-70 which involved 24 passenger vehicles and four semi trucks.

The semi truck driver, who Lakewood police said caused the fiery crash, was identified as Rogel Lazaro Aguilera-Mederos, 23, of Houston, Texas. He has been taken into custody on four charges of vehicular homicide, police said.

CDOT Chief Engineer Joshua Laipply said crews have assessed the Denver West bridge in the area and determined that it is in good shape.

Crews from across the state milled out damaged asphalt and repaved that area of the road. 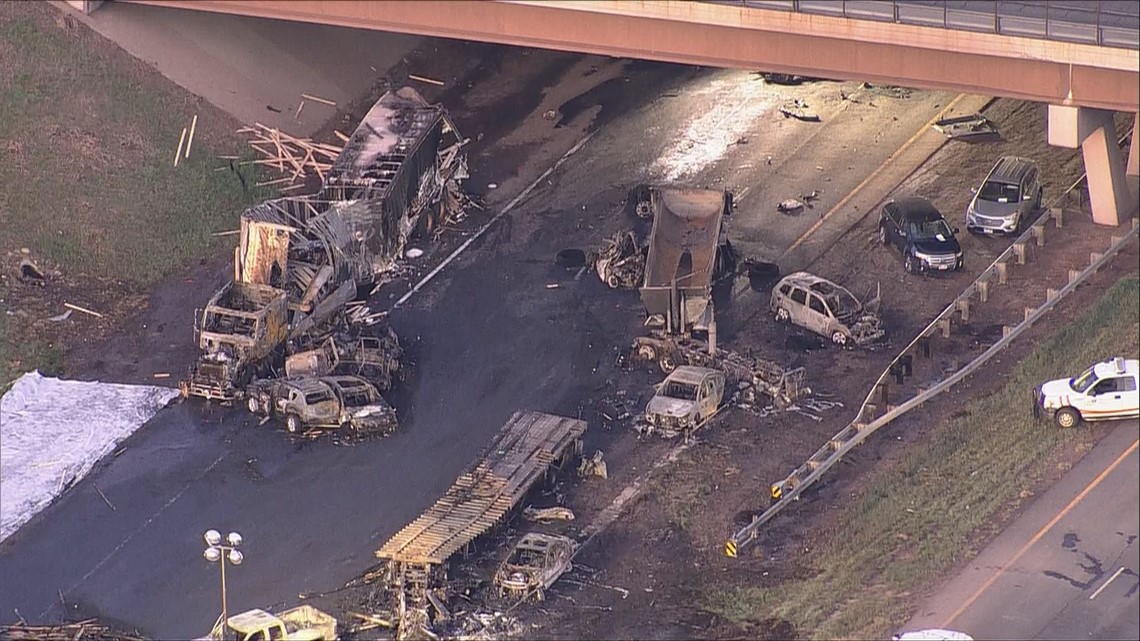 Nearly two years ago a massive fire damaged the pavement on Interstate 25 near the Denver Tech Center. It was caused by a tanker truck that blew a tire and crashed into a median.

Thursday's fire burned even hotter than the 2017 fire, according to Laipply.

"It seems like where this one burned was hotter so I would anticipate more pavement removal and replacement on this one," he said. "I've heard that the hot spots were up to 2,500 degrees. There's definitely aluminum that has melted. That would tell us that it's over ... 1,200 degrees, but it looks like most of the steel is intact."

Cristina Torres-Machi, an assistant professor at the University of Colorado - Boulder who teaches construction, engineering and management with a focus in transportation, said the concrete on the bridge was built to resist high temperatures.

"They may assess that it's safe from a structural point of view, but they probably need to do some work in the future," she said.

Torres-Machi said when engineers were first designing this stretch of I-70, they built the infrastructure with certain events in mind -- like fires or the potential for vehicles crashing into the bridge.

"I don't think an event like this is considered in the regular design of our roads," she said.

Torres-Machi said CDOT crews will also be assessing the impact of the crash on roads drivers took to avoid I-70 while it's closed.

Six civilians were injured in the crash.