The Avengers Campus seeks to be an immersive experience that allows guests to become super-heroic across a series of rides, shows and eateries. 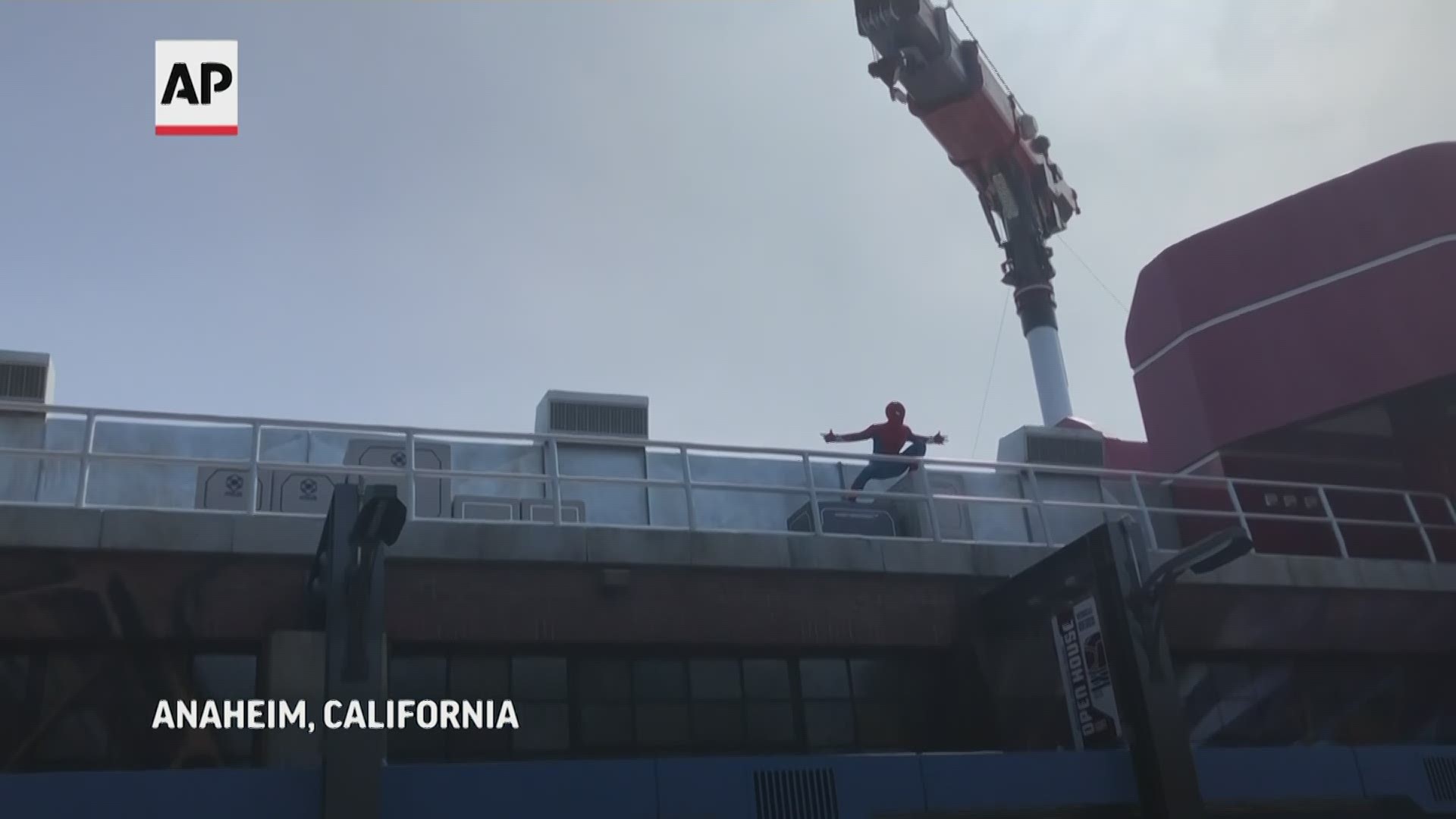 ANAHEIM, California — Now that it's getting safer to assemble, the Avengers are at last descending on Disneyland.

A Spider-Man ride that lets visitors blast bots with virtual webs from their bare hands and a show of strength from the royal guard of Wakanda are among the highlights of the new Avengers Campus at Disney's California Adventure Park, whose debut was paused for about a year by the coronavirus pandemic before it opens to the public Friday.

The Avengers Campus seeks to be an immersive experience that allows guests to become super-heroic across a series of rides, shows and eateries from the Marvel Cinematic Universe.

“We’re excited to finally open up the gates and let everybody in,” Scot Drake, a portfolio creative executive with Walt Disney Imagineering, said at the park Wednesday. “We had 70-plus years of stories and amazing characters to pull from, 23 epic films, and for us it was, ‘What is the best way to get our guests right in the middle of those stories, right in the middle of the action?’"

Central to that aim is “WEB SLINGERS: A Spider-Man Adventure,” which combines classic ride structure with an array of cameras that capture guests' body motion and allows them to play Peter Parker.

They're asked to help onscreen Spidey Tom Holland fight an outbreak of small, smart and powerful Spider-bots, creations that he and a team of inventive teens developed but lost control of in an old building donated by Tony Stark.

The experience resembles the videogame competition of Disneyland's Buzz Lightyear ride, but the action and the tech behind it are in a different galaxy. With no equipment necessary (though enhancement gadgets for the wrist can be bought next door), riders can blast swarms of the little spider-bots (which can also be purchased next door), and a couple of not-so-little ones.

“What was really important to us was to try and make the interface disappear so the guests just had the superpowers themselves," said Brent Strong, executive creative director of Walt Disney Imagineering. "So in order to do that we did a whole bunch of invention to try and make the technology as un-obvious as possible.”

Journalists got to take the ride for a few spins Wednesday. With each pass the experience changes, as guests start to master their web-slinging and figure out they can do more than just blast away with their powers.

“You can start to grab on to shipping containers, open doors, grow things and shrink things,” Strong said. “We've hidden a million Easter eggs and fun little surprises in there.”

Elsewhere, majestic music blasts to announce the marching arrival of the Dora Milaje — the royal guard that protects T'Challa in “Black Panther.” With their leader Okoye, the shaven-headed women of Wakanda twirl their spears and explain their principles to give wannabe warriors in the audience a lesson in the fighting arts.

The show includes something rare for a day at Disneyland: a moment of silence for the dead. While Okoye tells the crowd she seeks to honor fallen kings and ancestors, the ritual, in a time of many such moments, feels like an acknowledgment of the many deaths during the pandemic that kept the park dark for more than a year. (It also feels like an acknowledgement of “Black Panther” star Chadwick Boseman, whose death last year stunned the world.)

Disney's two Anaheim parks reopened with restrictions on April 30 and will reopen at something nearing normal on June 15.

The new section was also built to incorporate “Guardians of the Galaxy – Mission: Breakout!” a drop-tower ride with funky tunes in place since 2017.

The storytelling on the Avengers campus even extends to the food, including an outlet of the Shawarma joint that Iron Man suggests his allies hit up after the Battle of New York depicted in 2012′s “The Avengers." It was open for sampling Wednesday and as Tony Stark promised, it is, indeed, good.

Another Avengers Campus is planned for Disneyland Paris. The California version will have major additions. Other heroes, including Thor and Iron Man, will make appearances, and Doctor Strange will work his wizardry in his Ancient Sanctum several times a day.

Some of those heroes, in Marvel's movies, are dead, and for those who follow the events of the Marvel Cinematic Universe with near-religious precision, it can be tough to tell what time period the campus is set in.

The creators say don't overthink it.

We've summoned heroes from across all of space and time," Strong said. “Time is a lot more squishy than any of us think. Trying to put a specific date to it can be challenging. But to us, Avengers Campus is here and now.”