CDOT wants you to use state site, not your phone, to get directions around I-70 closure

On Monday, Google Maps didn't show detour CDOT suggests to get to and from Glenwood Springs. 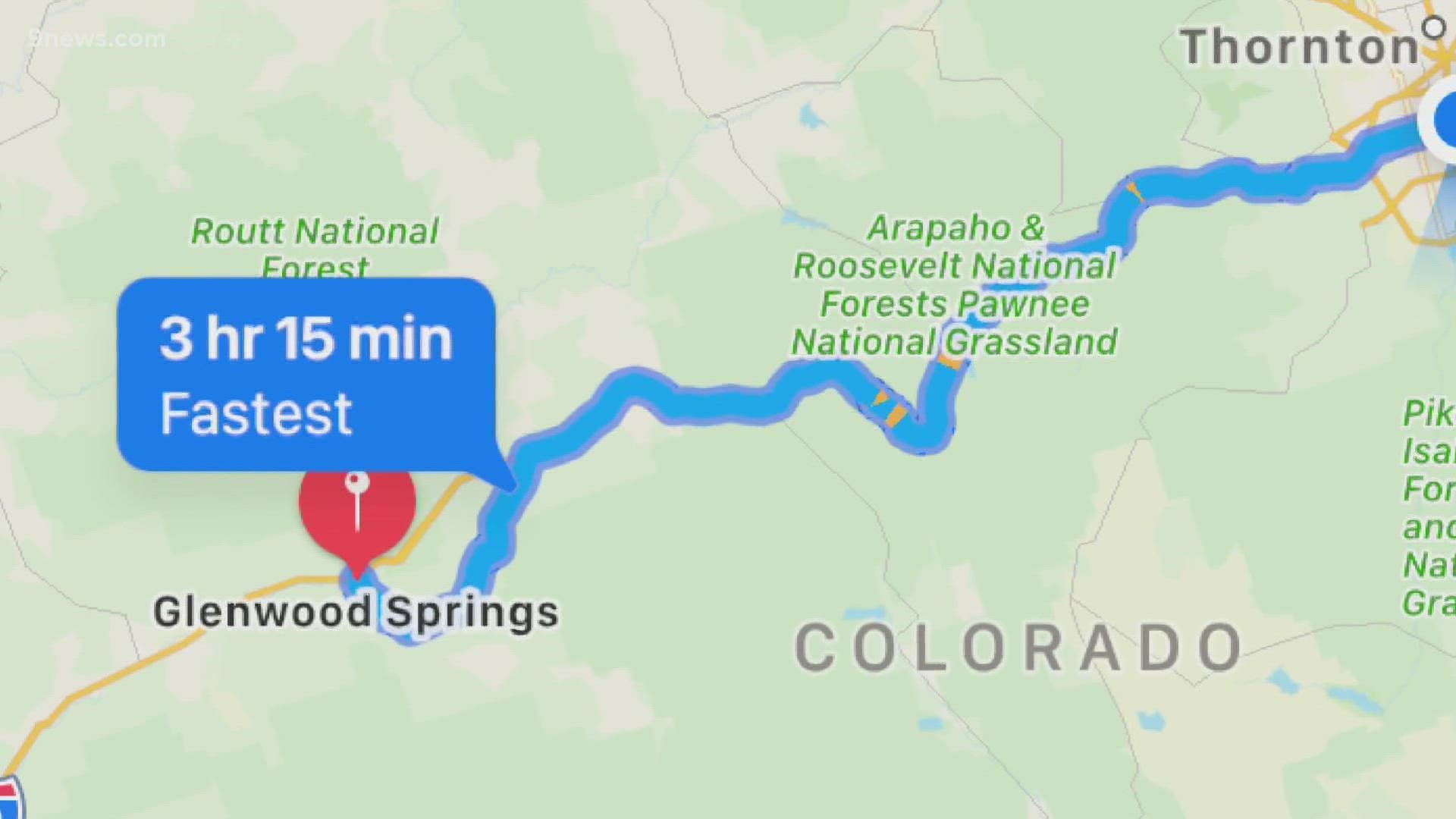 COLORADO, USA — The Colorado Department of Transportation (CDOT) said Monday I-70 in through Glenwood Canyon is expected to open back up in days rather than weeks – right now, the department is urging people to drive north up to Steamboat Springs to get around the closure.

But Google Maps on Monday night didn't even show that route as an option. CDOT and first responders believe people are getting into trouble by relying on their phone for directions.

"People are really searching for any possible route they can find to get around," said Matt Inzeo, communications director at CDOT.

I-70 in Glenwood Canyon is closed between Exit 116 at Glenwood Springs and Exit 133 at Dotsero, due to road damage caused by mudslides from the Grizzly Creek burn scar.

CDOT wants travelers from the Denver metro area to exit I-70 at Exit 205 at Silverthorne and travel north on Colorado Highway 9 towards Kremmling.

Travelers can continue west on US Highway 40 and then south on CO 13 to complete the alternate route and return to I-70 at Rifle at Exit 90. Eastbound travelers can detour using the same route in reverse.

CDOT said CO 82 Independence Pass should not be considered an alternate route – no commercial motor vehicles or vehicles over 35 feet are allowed.

Yet, that is the route Google Maps suggested drivers to take from Denver to Glenwood Springs.

"They (tech companies) are using algorithms to figure out what algorithm thinks is the best route, you know," said Inzeo. "We are looking at a set of factors we know travelers are going to need."

Inzeo said one of the reasons CDOT doesn't recommend Independence Pass as an alternative route is because not every car can safely use it, particularly semis and large campers.

Apple Maps, like Google, also didn't show CDOT's recommended detour around the I-70 closure, but it appears the company fixed the issue on Monday night.

Originally, the app told people to take Cottonwood Pass Road, a detour CDOT strongly discourages. Now it suggests driving up to Steamboat Springs to get around the closure.

Eagle County Sheriff's Office said they receive at least one call every hour for service on Cottonwood Pass. Amber Barrett, a spokesperson for the department, said there are still rescues on that road even with crews there to turn away big trucks. Barrett felt too many people trust their cell phone apps to get directions around the I-70 closure.

"Aggressive drivers, speeders, a vehicle off the road," she said. "It's definitely a tough situation up there."

Barrett said a driver of a semi got into trouble on Sunday while trying to find another route. Trail Gulch Road was closed for a period of time to tow the semi after it got stuck.

Garfield County Sheriff's Office said 21 people were rescued on Friday night after their Greyhound bus got stuck on Coffee Pot Springs Road. By trying to navigate the roadway the Greyhound bus managed to tear a hole through the bottom of its engine’s oil pan, which created an oil spill along the mountain road.

"We can't stress enough to use trusted paved alternate routes that are suggested by CDOT," said Barrett.

CDOT recommends using CoTrip.org, instead of a phone, to get directions.

"We are in the midst of some pretty significant upgrades to CoTrip to make it easier to access, more user friendly and also to give a user experience that is more similar to the most common apps," said Inzeo.

CDOT plans to roll out a mobile version of CoTrip.org in the next month or two.

"We are going to continue to make sure people understand CoTrip is the best place to go, particularly for longer trips," he said.

CDOT said it will continue to have conversations with tech companies to make sure their information on the apps lines up with the state as much as possible.

According to Google, they work to address errors as quickly as they can and empower people to help them by submitting corrections.

"We built Google Maps with safety and reliability in mind, and are working quickly to investigate any routing issues related to I-70 and surrounding areas. Navigation guidance in Google Maps is based on street designations gathered from sources like authoritative data providers and real-time feedback from users. When official changes are made to restrict certain routes, we update our directions accordingly," said Google.