It's Denver International Airport's 25th birthday, but there are thousands of reasons some travelers aren't celebrating: escalator, elevator and walkway outages. 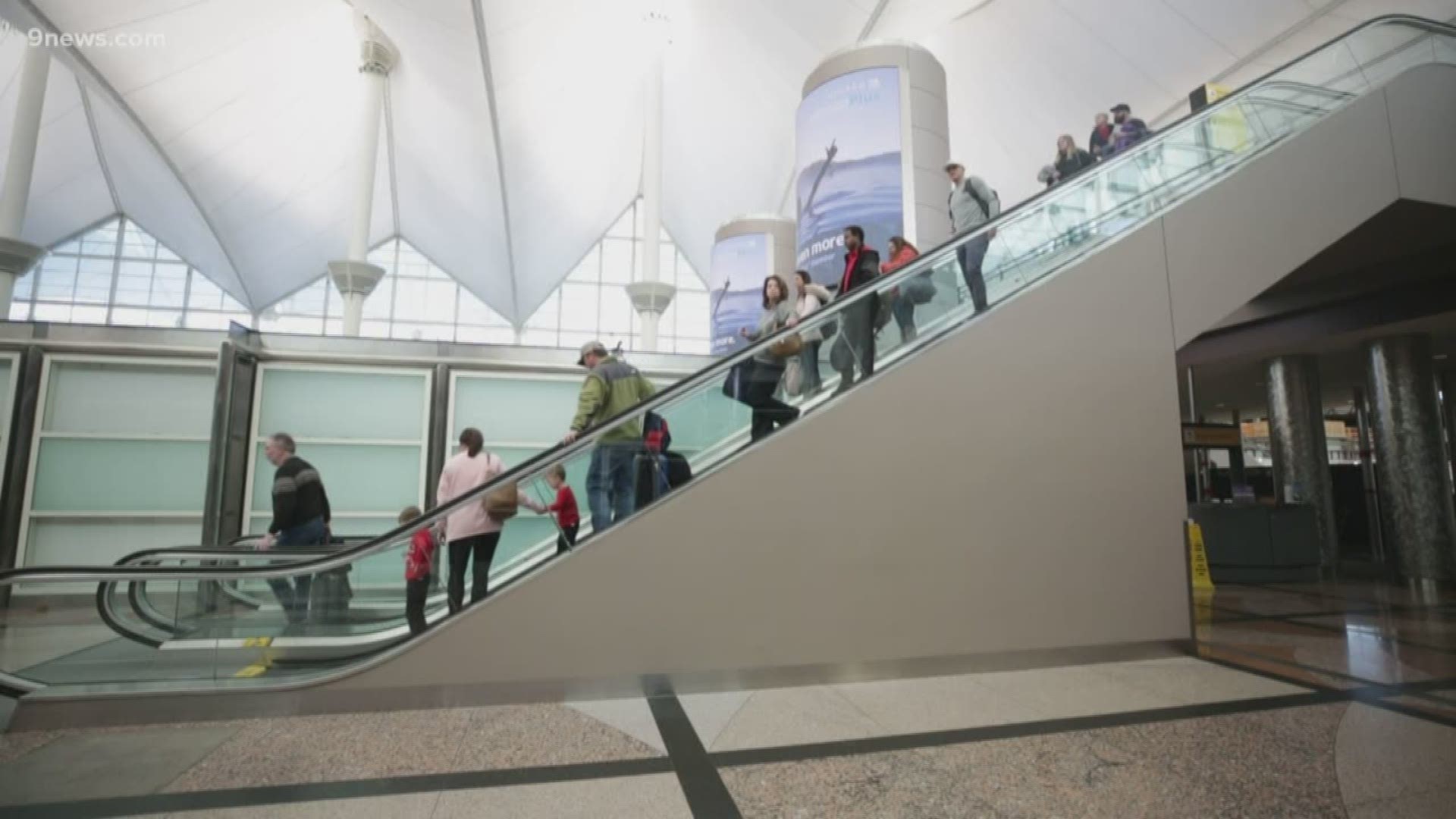 DENVER — Denver International Airport (DIA) is in the business of moving people.

They move from city to city, from concourse to concourse, and even floor to floor, usually floating along on one of the 321 conveyances within the airport – that is, if those escalators, elevators and moving walkways are in service.

“I'm out here about two times a month, and I'm safe in stating that I see a broken escalator, electronic walkway or an elevator 90 percent of the time,” said Jim Leary.

Leary travels for business. He began casually tracking and taking pictures of broken escalators and power walkways years ago, and he is not the only one. Reddit threads, an Instagram account and Facebook page are dedicated to chatting about broken conveyances inside Denver’s airport.

"It's a black eye to this city, to this airport and to our state,” he said. "I don't see this rampant of a problem in any other airport."

About 190,000 people move through DIA on an average day, according to DIA Chief Operating Officer Chris McLaughlin, who estimated the average traveler uses a conveyance three times per visit.

"I think that it's not unrealistic that you would see a conveyance out somewhere in your journey at DIA,” said McLaughlin. “The reality is after 20 years of traveling and working through this building, that doesn't happen as frequently as it would seem."

While Leary and McLaughlin have separate opinions on outage frequency, DIA has hard numbers to consider.

There are 321 conveyances currently in operation today, but at its peak, there were 328 in use in the last five years. Some escalators, elevators and power walkways have been shut down or moved since 2015.

According to data gathered by 9Wants to Know, escalator, elevator and power walkway outages have all increased year over year since 2015. In 2019 alone, the airport averaged more than 34 outages a day among all three mechanisms -- that includes an average of about 18 escalators, 11 moving walkways and five elevators per day.

It usually takes a half-hour for each asset to go back online. That has been consistent since 2015.

The longest outage was an escalator in the terminal in 2016. It was off for 158 days.

DIA uses a company called thyssenkrupp for repairs. The airport prioritizes getting elevators and escalators fixed ahead of walkways when they break, but all together, McLaughlin said DIA’s conveyances work properly 98% of the time. The contract with thyssenkrupp allows the airport to issue fines if any device is not on 99% of the time. Essentially, a conveyance can be down as long as 7 hours and 45 minutes a month and still be considered OK.

At one point, DIA could have fined even more.

The penalty used to be $1,000, per the original contract signed in 2014, but a year later it was lowered because a DIA representative said the city wanted to “reach a compromise that promotes partnership, transparency, and excellent service.” Matt Conway, director for maintenance services, wrote in 2015 if there was a “decline in service,” the penalty would be restored.

"We have what we're allowed to do within a contract, but we also consider ourselves to be partners, so we're not looking to be punitive with our partner,” McLaughin said. "I would say that on any given day, you may see an escalator out of service somewhere in your journey, but for the most part, they're up and operational 24 hours a day for 25 years now.”

Dennis Van Milligen, a spokesperson for thyssenkrupp, said in an email the problems with the devices across the airport are the result of “unprecedented growth” in the number of passengers flying in and out of DIA.

“Increases in passenger volume, construction growth and equipment obsolescence have put additional stresses on the conveyances beyond the normal issues, such as parts simply wearing down and needing to be replaced, as well as rebuilds or refurbishments, which can take units out of service for extended periods of time,” Van Milligen said.

About 31 million traveled through DIA when it opened in 1995, and the airport continues to break its own traffic records as that number keeps increasing. Data from the airport shows a 27 percent growth in passengers in just the last five years. There were more than 54 million total passengers in 2015 and more than 69 million in 2019. Today, it’s the fifth-busiest airport in the country.

Van Milligen said thyssenkrupp “[understands] the frustration of the inconvenience that comes with conveyance systems being out of service” and getting passengers to their destination safely is the “top priority.”

"With that growth means more and more people on the escalators, on the elevators,” McLaughlin said. “And in some cases, we see human interference.”

McClaughlin also said that DIA's maintenance performance is better than similar-sized airports and has better performance standards than other airports. When asked, he did not volunteer specific names of airports, or say how DIA knows this.

Regardless of comparisons, the rate of outages doesn’t fly in Leary's opinion, even if people have the option to use a broken escalator like a staircase.

“Say that to an elderly couple having to carry their bags up, or a handicapped person -- they're waiting in line for the elevator,” Leary said. "I can tell you what, if I had a maintenance worker come into my house and they had to repeatedly come back to fix my plumbing, I would certainly fire them if they did the job I see out here on the escalators.”

DIA wants to encourage people to report outages on their SeeSay App. While used primarily to report security concerns, filing a report will make sure maintenance crews are aware of a problem. Tap “report type,” then “maintenance issue” and then choose the type of machine that is down.

This is the full statement thyssenkrupp sent to 9NEWS:

When thyssenkrupp was selected to service the 321 elevators, escalators and moving walks at Denver International Airport six years ago, we prioritized working closely with the airport to determine the true health and condition of the equipment. This process included implementing DIA’s asset tracking system that records all service and maintenance requests in an effort to improve how the conveyance systems, which are now 25 years old and run virtually non-stop, are supported throughout the facility.

During our tenure as conveyance service provider, Denver International Airport has experienced unprecedented growth with passengers increasing by more than 30 percent, and ultimately reaching nearly 70 million in 2019. As DIA continues to grow, so do the challenges involved with running the facility. Increases in passenger volume, construction growth and equipment obsolescence have put additional stresses on the conveyances beyond the normal issues, such as parts simply wearing down and needing to be replaced, as well as rebuilds or refurbishments, which can take units out of service for extended periods of time.

Overall, we are pleased to achieve 98 percent uptime and resolve most conveyance issues in less than 30 minutes, and feel we are on the right path with DIA in our pursuit of improved conveyance performance. We will continue to work together to improve the travel experience for DIA’s growing passenger base, and while we understand the frustration of the inconvenience that comes with conveyance systems being out of service, we hope passengers understand that we are looking out for their safety, Denver International Airport is looking out for their safety, and our top priority is ensuring each passenger reaches their final destination in the safest, most efficient way possible.