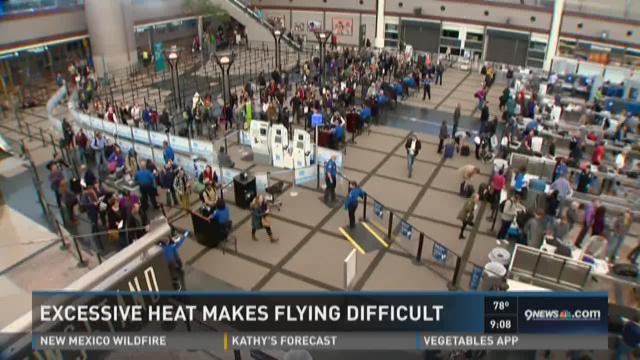 KUSA – Scorching, potentially record-breaking heat expected across the West this weekend could pose problems for some airports.

Heat-related delays are possible through the weekend. Temperatures in Phoenix, Arizona on Sunday and Monday could near the city’s all-time record high of 122 degrees set back in 1990.

“As the temperature goes up, the density altitude or the molecules in the air go down and the aircraft is not as efficient,” Feith explained.

Feith said the wings struggle to lift heavy weight and engines run into trouble, too, when heat becomes excessive.

Different planes will run into problems at different temperatures.

“Typically the airlines, depending on the equipment they’re flying have different thresholds,” Feith explained. “Small, general aviation airplanes, business jets, may have a lower threshold because their wing structure is different, the design is different and of course the engines are different.”

Feith said those thresholds could range from the low 100s to about 115 degrees.

Temperatures in Denver this weekend are expected to reach near triple digits. Heath Montgomery with Denver International Airport said he can’t recall any cancellations or delays at the airport simply because it was too hot outside.

“It takes more than just high temperatures to affect an aircraft,” Montgomery said. “It’s also humidity, wind speed, wind direction, the type of aircraft, how heavy the aircraft is, how many passengers are on board and how many carry-ons people brought.”

Montgomery said it also helps that DIA has the longest commercial runway in North America.

“It’s 16,000 feet long, it’s 200 feet wide and that runway was designed specifically to help aircraft operate in our thin air at altitude and also during hot conditions in the summer,” Montgomery said.