Work on the project was halted in 2019 after DIA fired the original contractor with work just about 25% complete. 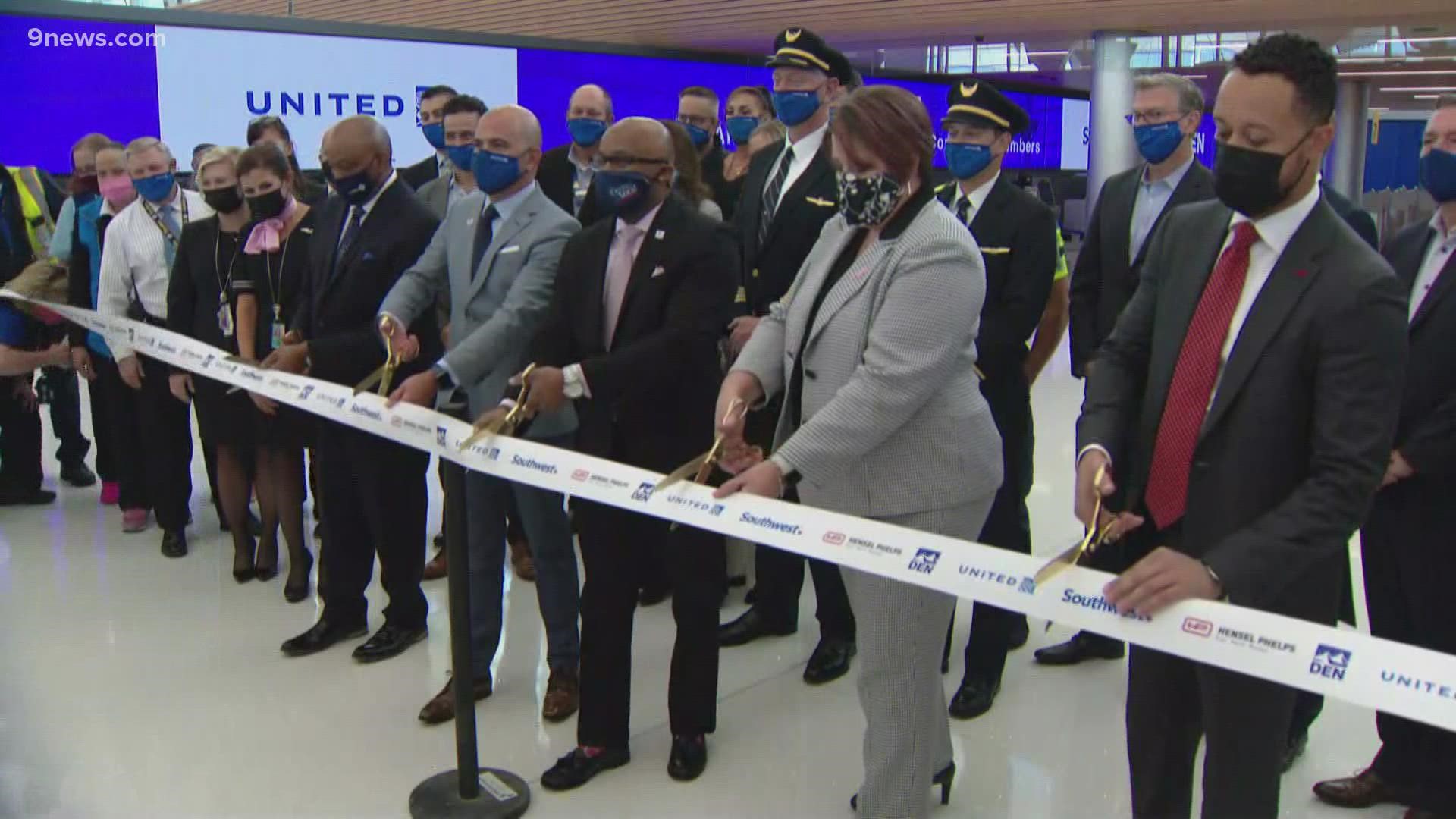 DENVER — Denver International Airport (DIA) on Wednesday celebrated a major milestone with the completion of Phase 1 of its Great Hall Project, which was plagued early on by issues related to contractors, budget and timing.

Construction walls will come down in the next few days, and four new ticketing pods will be fully operational by Nov. 10, DIA CEO Phil Washington said at a ceremonial ribbon-cutting. United and Southwest airlines will operate the new check-in and self-bag drop kiosks.

Phase 1 focused on Level 6 of the airport and also includes upgraded restrooms and 16,000 square feet of new space for passenger flow and security.

"This is an important milestone for all of us. Isn't this beautiful?" Washington said, while also pointing out that there's more work to be done.

Phase 2 of the Great Hall Project started in July, and Phase 3 is in the planning process.

Work began on the Great Hall Project in July 2018 to renovate the airport’s main Jeppesen Terminal to improve security and passenger flow, and to accommodate future growth.

This first phase was plagued by troubles early on, as DIA evicted the original contractor Great Hall Partners in August 2019 with the project about 25% complete. It sat mostly dormant for months until Denver-based Hensel Phelps Construction was brought on to complete the work and began its part in March 2020.

After the new contractor took over, construction on Phase 1 was completed in less than 20 months, and was on time and millions under budget, according to DIA.

Washington and Denver Mayor Michael Hancock said on Wednesday that DIA's passenger traffic was the third-busiest in the world in the first half of this year, according to Airports Council International.

"By preparing this airport for the future, we are stimulating our economy right now," Hancock said.

'On budget and on time'

"We cannot stop here with Phase 1. We've got to finish and rebuild this entire terminal to accommodate the passenger volumes that we will see in the next five to 10 years," Washington said Wednesday. "Yes, we still have a lot of work to do, but the completion of Phase 1 is still important."

The completion of Phase 1 comes at the end of 2021, when the original Great Hall Project's four phases were supposed to be completed.

"It's not lost on us the challenging journey it's been for this project. We don't have to recap it or talk about it again, but it's been a challenge," Hancock said.

They do not have to recap it. But we do. 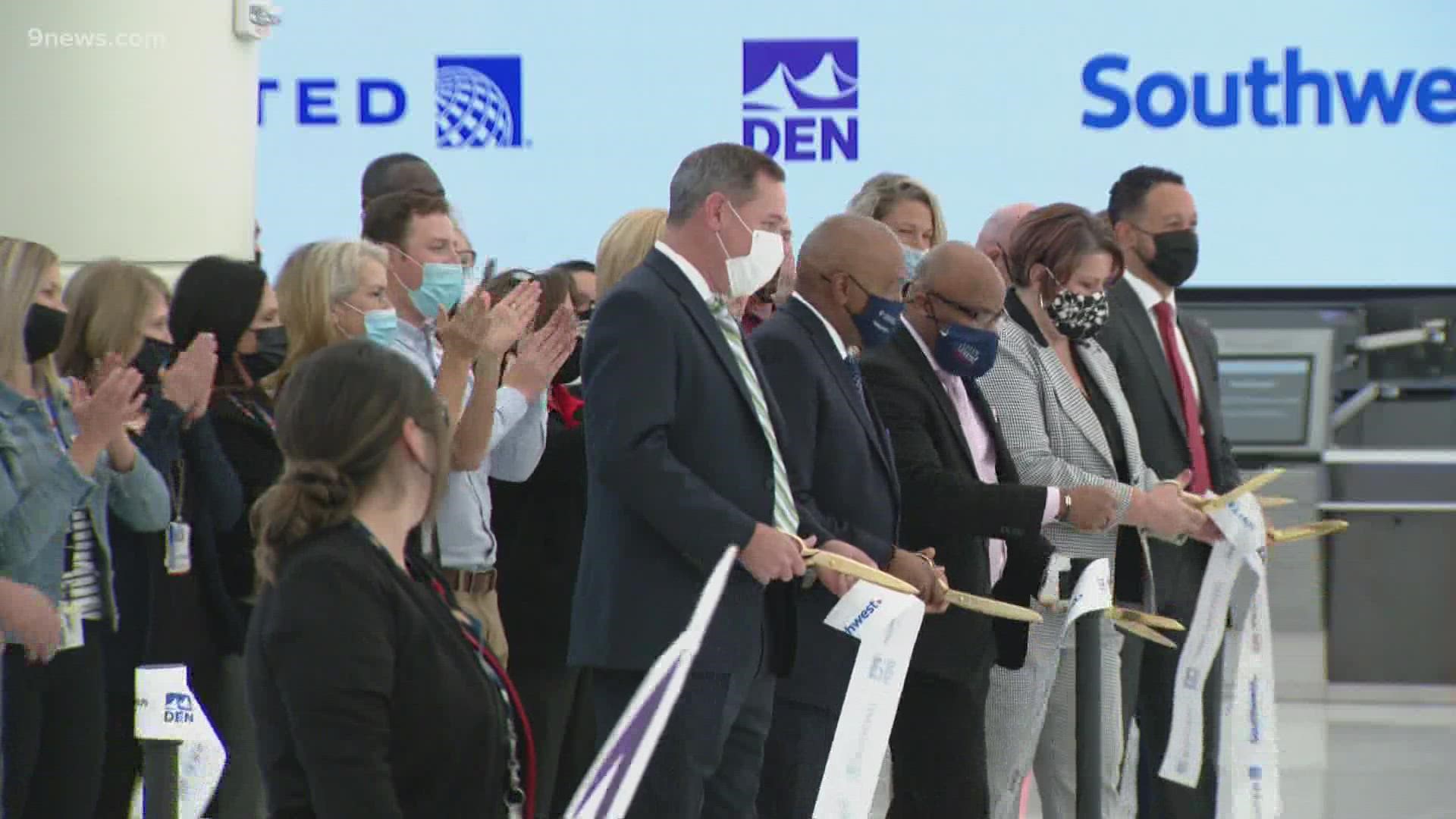 The original project began in July 2018. The focus was to move the security checkpoints from Level 5 to Level 6. The short version is that the project got over budget, behind schedule and DIA divorced from the original construction partners after paying out almost $200 million.

"This was absolutely very turbulent, but today we're going to focus on the fact that we complete a phenomenal Phase 1, already kicked off Phase 2 and we're gearing up for Phase 3," Hancock said.

Phase 2 began in July. That will move the south security from Level 5 to Level 6. That move should be completed by 2024. The north security will remain on Level 5.

"When this is all said and done and we look back, very few people will talk about the challenges that we had. They'll look at the asset we left behind," Hancock said.

Just like "on time and under budget," that would be true if people never talked about the failed automated baggage system that cost hundreds of millions of dollars and delayed the opening of the airport by 16 months.

The Great Hall Project no longer has four phases. It has one completed, one in progress and a third phase that Washington expects to present to Hancock and city council by mid-December.

"We're in the process of defining Phase 3, the final phase of this project, right now," Washington said.

He said it would include moving the north security up to Level 6 as well.

"That is the ideal situation, right? That security be moved to Level 6," Washington said. "I think that that was the original intent of the whole project, and I stand ready to make that happen."

"All great things have been, at some point, challenged. Did you know that pearls and diamonds come from bacteria?" Hancock said at the ribbon-cutting. "This airport is our greatest, most precious stone, and it's been through some moments of bacteria."

Phase 1--or any of the phases, for that matter--will not solve the issue of long security lines. There will be fewer construction walls to maneuver around, but the security lines are not changed.

Last week, Washington announced there would be four new security lines to help with long security waits. On Wednesday, he said those could open in time for holiday travel.

"The new security lane infrastructure, I mentioned last week that it might be early next year. We think we can get that done before Thanksgiving," Washington said.