One of the greatest gifts Johnny Cash may have ever received came by way of an embezzling accountant. 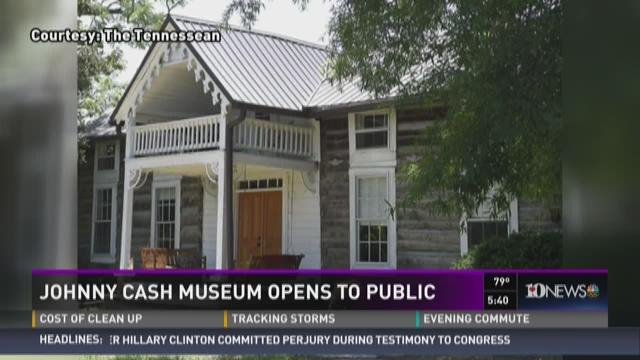 One of the greatest gifts Johnny Cash may have ever received came by way of an embezzling accountant.

"Pete," as Cash called him in his 1997 autobiography, had been taking Cash's money and buying several properties, including a 107-acre farm in Bon Aqua, Tenn. When Cash found out, the country music star made Pete sign over the properties. He and his wife, June Carter Cash, sold all of them, except for the one in Bon Aqua, which became his respite from the road.

"For me in '72, it was love at first sight ... a place that moved into my heart immediately, a place I knew I could belong," Cash wrote in his book. "This is a great place for pottering. I can cook my own food, read my own books, tend my own garden, wander my own land. I can think, write, compose, study, rest and reflect in peace."

Now, Brian and Sally Oxley want to share Cash's refuge with the world.

In 2015 he and his wife purchased the Cash farm for $895,000. The arbor Cash built for his grapes was still standing, there were bullet holes in the wall from the time he taught his daughter Cindy Cash how to shoot a pistol, and one of the last cars he ever owned — a black Mercedes — sat under a tarp in the barn.

While going through some other items that had been left in the two-story farmhouse, the Oxleys found a VHS tape of a party celebrating Cash's 20 years in the music business. The couple discovered that the party had taken place in 1975 at an old general store Cash had acquired that was a mile down the road from the farm. They purchased that property, too, determined to restore the decrepit building and the little stage that was set up in the back.

"We used to sing here on Saturday nights," Cindy Cash said in May while construction workers put the finishing touches on the former store. "Us girls would get up on stage and sing whatever we wanted ... we'd sell lemonade and cookies that we made. We would take turns singing, or sing together, and Dad would get up there, too. It was so neat because it was just the locals. We didn't advertise: If you saw a piece of paper on the door, you knew there'd be singing that night."

On Tuesday both the Cash farm and the general store — which the Oxleys have transformed into the Storytellers Museum — open to the public.

The simple exterior of the museum belies the eclectic collection inside. Dioramas, paintings, handwritten letters and song lyrics (including the words to "Saturday Night in Hickman County," inspired by Cash's time in Bon Aqua) hang on the walls.

Apart from Cash memorabilia, a leaf from a rare Gutenberg Bible, which was printed in the 1450s, sits inside the museum 50 yards away from an old, black Cadillac parked behind the building. The car — which has a television, mini refrigerator and yellow shag carpet in the back — reportedly belonged to country singer Johnny Paycheck. There's another Cadillac inside: the "One Piece at a Time" car, inspired by the delightful story-song Cash recorded 40 years ago. A statue of Smeagol, a character from J.R.R. Tolkein's "Lord of The Rings" novel, had been placed near a display case that held artifacts related to the hymn "Amazing Grace," and statues of Superman and E.T. stared down at the mishmash from the loft.

"We want to make this more of an experience than a museum," Brian Oxley says. He plans to feature live music on the little stage that the Cash family sang on and to keep the farm a "sanctuary," like it was for Cash.

For Cindy Cash, who occasionally stays at the Bon Aqua property, the farmhouse and museum are another way to feel connected to her father, who died in 2003.

"I can feel his presence here so strongly," she said tearfully. "Dad would have loved this."

The Storytellers Museum is at 9676 Old Highway 46 in Bon Aqua. The museum and farm are open Tuesday through Saturday. Visit storytellersmuseum.com for hours.

"As soon as he'd come off the road he'd say, 'I'm going to the farm,' and he'd go spend three or four days there. He had a phone but it stayed unplugged unless he wanted to call out. He wanted to be in touch with God, I think. It had a lot to do with his spirituality, his love of nature, and the solitude he found here. This is where he found his serenity, and the people around here are quiet, gentle souls who would be very kind to him and let him have his peace." — Cindy Cash on her father's love for his farm in Bon Aqua.