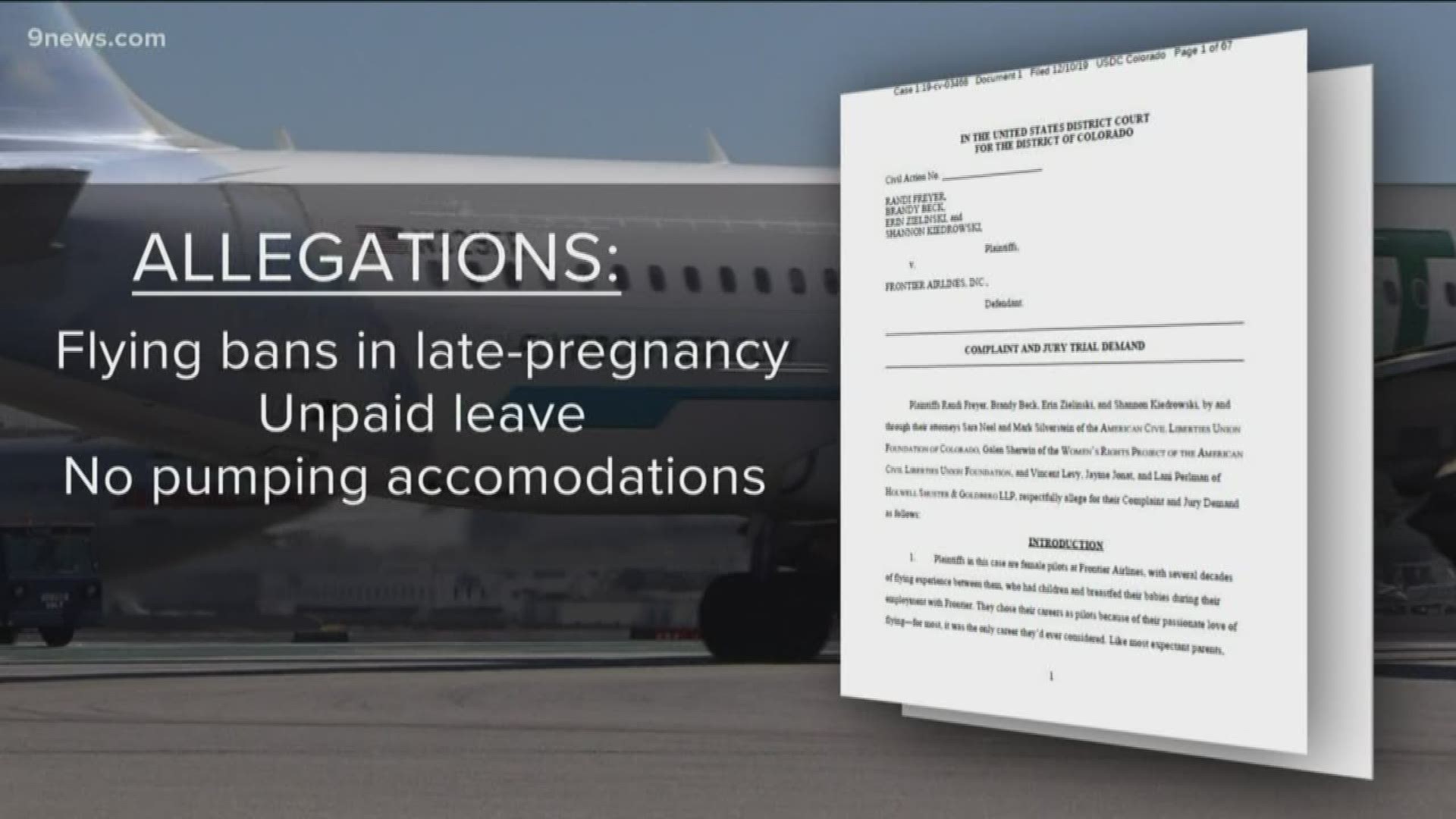 DENVER — A group of Frontier Airlines pilots and flight attendants have filed two federal lawsuits claiming the company discriminated against them during pregnancy and while breastfeeding.

The lawsuit, filed in Denver on Tuesday, aims to challenge several policies that impact pregnant and breastfeeding employees within the company.

The lawsuit also claims that the Denver-based airline penalized flight attendants for absences during their pregnancies.

The lawsuit goes on to allege that Frontier refused to provide accommodation relating to breastfeeding and even banned employees from pumping while on duty.

"Pumping on the aircraft is very much a don’t ask, don’t tell policy. It's not even permitted to do. So it was something I wasn’t sure I wanted to risk," said Melissa Hodgkins, one of the flight attendants who is a plaintiff in the lawsuit, and the mother of two young children.

Hodgkins said after her pregnancies, she already struggled with breastfeeding. But she said she had to return work, so she ultimately decided to quit breastfeeding when she returned from maternity leave.

"I felt as if I was being forced to choose between my career and my family," she said. "This leave is unpaid. It put me between a rock and a hard place. I needed to get back to that paycheck, but I was also terribly sad that I had, basically given up nurturing my boys the way I had intended to because I didn’t want to sacrifice my career."

When Frontier pilot Brandy Beck returned to work after having a baby, she said she tried asking Frontier about in-flight breastfeeding policies.

"I asked [Frontier], I want to say a couple times, 'I understand you can't designate the lavatory on the aircraft as a designated pumping area, a lactation room. But will I get in trouble for pumping in the lav?'" she said. "The only response I ever got back was, no we cannot designate it as a lactation room."

"So it was never a 'yay' or 'nay' of whether I would get in trouble for using it," she continued. "It's an unsanitary space, its not my first choice. But with small turn times, sometimes it's my only choice."

Beck said she doesn't want to be forced to choose between her family and her career.

"Did we ask men to choose that?" she said. "And... this is a passion. This is something I've wanted to do since I was a child, and so is having a family. Why make me choose one of my passions? I should be able to do them all in this day and age."

Both suits seek changes to Frontier's current policies, including making ground positions available during pregnancy or breastfeeding, allowing schedule modifications for breastfeeding employees, and providing employees breaks and designated locations to pump while on duty.

"Frontier Airlines has strong policies in place in support of pregnant and lactating mothers and remains committed to treating all of its team members equally and fairly. Frontier offers a number of accommodations for pregnant and lactating pilots and flight attendants within the bounds of protecting public safety, which is always our top priority. Frontier denies the allegations and will defend vigorously against these lawsuits."

The lawsuits were filed by Holwell Shuster & Goldberg LLP, the American Civil Liberties Union Foundation of Colorado and the Women’s Rights Project of the ACLU Foundation. 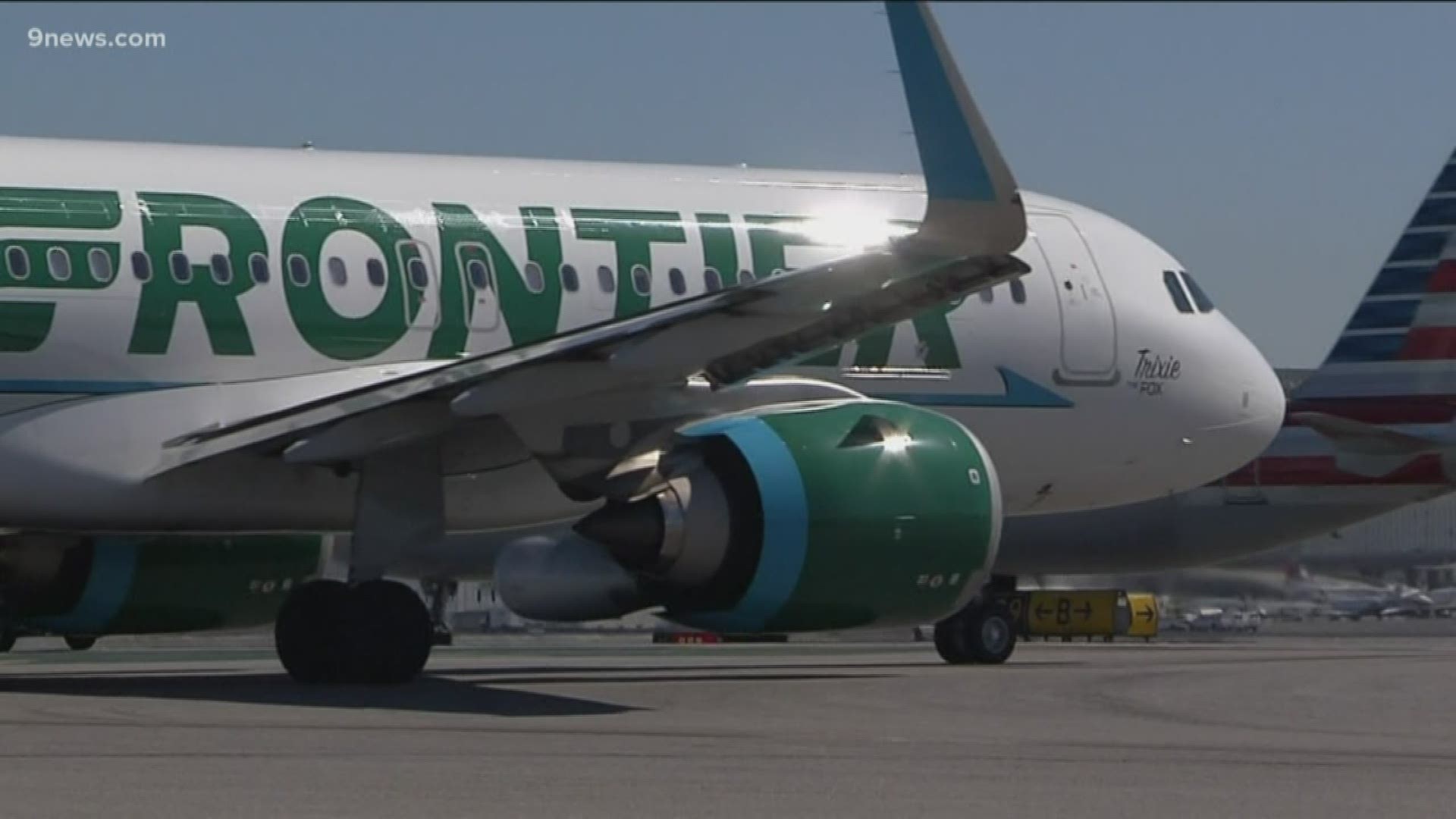