Seeing too many pets on flights? There's a reason for that

If you've flown anywhere in the country recently, you've no doubt witnessed a growing trend: emotional support animals in airports and on board. 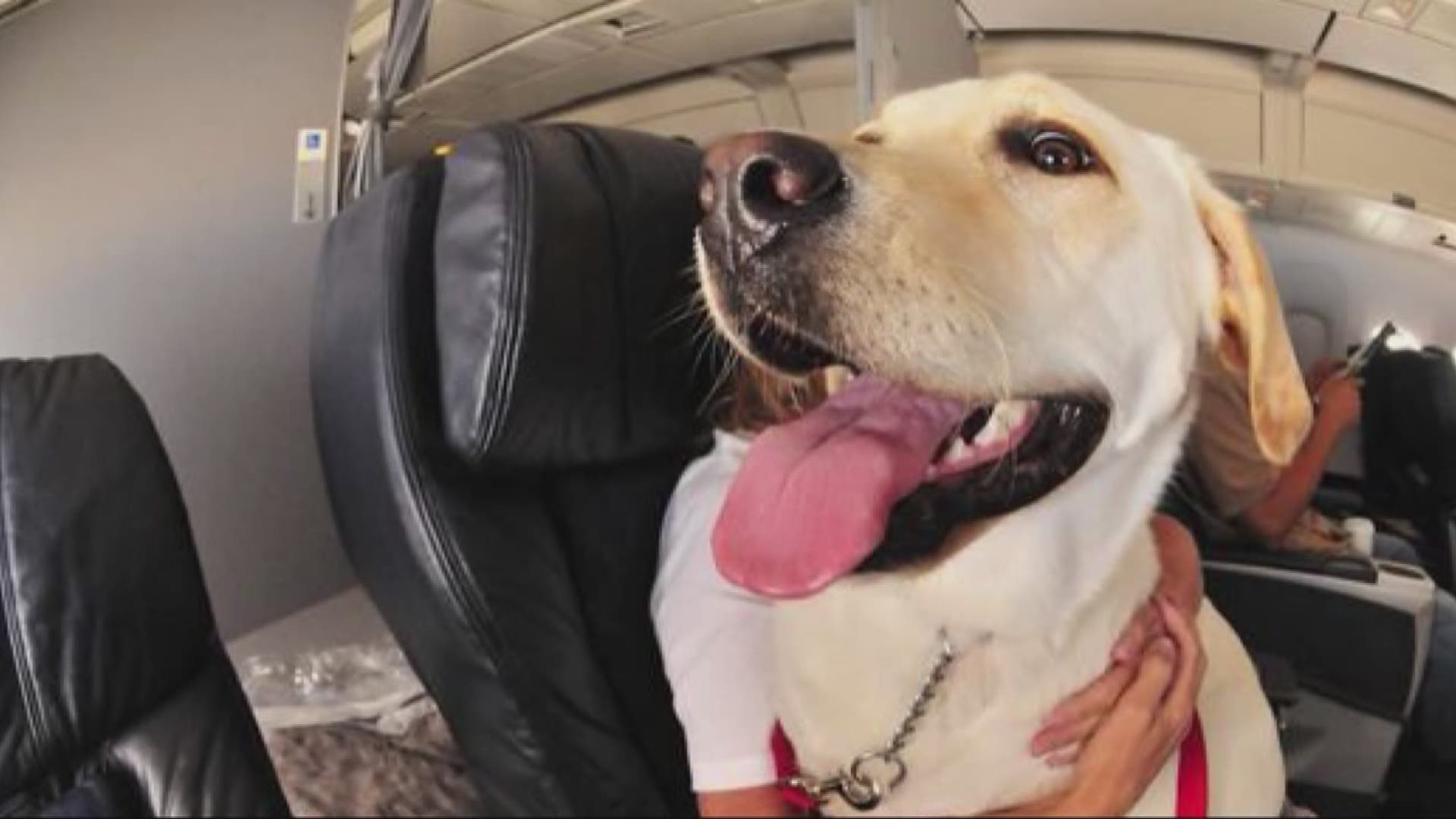 If you’ve flown anywhere in the country recently, you’ve no doubt witnessed a growing trend: emotional support animals in airports and on board.

The passenger next to you may just be an emotional support dog, miniature pony or even a turtle. Some airline flights are looking more like barnyards in the sky.

Meanwhile, many believe pet owners are abusing the system.

"You’d be surprised," said Bobbie Morales of the Association of Flight Attendants. "We’re seeing birds, pigs, rabbits and of course, lots of dogs."

Douglas Kidd of the National Association of Airline Passengers has witnessed this phenomenon too.

"There was a case of a man bringing a turkey on board," said Kidd. "Miniature horses. Capuchin monkeys."

In fairness, some emotional support animals (ESA) do make a life-changing impact on their owners. But they’re not considered service animals by law, and there are no minimum standards for their training or behavior. That may put your safety at risk.

"My greatest fear is that one day there will be an evacuation and this animal that’s not trained will be in the way...in the way of actually getting people off the aircraft," said Morales.

One reason pet owners are resorting to questionable behavior is because of cost. Flying with a pet can cost as much as $300 for a place in cargo. ESA's fly for FREE.

"The animals are shipped with the luggage, and sometimes treated about the same way," said Kidd.

Under the law, a passenger can fly with a pet in the cabin if it’s a certified emotional support animal or ESA. It’s completely legal under federal law. All you have to do is prove with documentation that your pet is essential to your psychological wellbeing.

Morales says some passengers are gaming the system, hurting people who depend on highly trained service dogs.

"I get so irritated," Marine Corps veteran Mike Garvey said.

Garvey was injured serving our country in Afghanistan. Out of control ESAs give his trained dog, Liberty, a bad name.

"Now if people see me and my dog getting on a plane, are they worried? Are they automatically just hostile toward me? Is this dog going to be the screaming baby?" he asked. "Someone told me a story when I was traveling about a little dog on a plane that just yapped for three hours, in the back. And everyone on the plane was just ready to throw him off. "

Furthermore, flight attendants insist some emotional support animals will bark and even lunge at passengers and crew members. They may run loose and relieve themselves in the aisles.

It doesn’t help that social media is filled with images of animals sitting on airline seats or in the laps of their humans. That's a violation of FAA regulations.

"Animals cannot sit in a passenger seat. Even if their owner buys a seat," said Morales.

RELATED: What you should know about service dogs

1 / 4
The FAA allows each airline to decide whether to allow pets in the passenger cabin. However, the animal cannot sit in a passenger seat, even if the owner buys a seat for the animal, according to the Association of Flight Attendants.

WUSA9 reporter Andrea McCarren looked into the process of getting an animal certified as an ESA. She easily found one website, CertaPet, and logged online.

McCarren took a five-minute psychological screening to see if she qualified for an emotional support animal.

Afterall, working in a newsroom can be a stressful job so she answered the questions about daily anxiety honestly.

Without much surprise, she qualified for an ESA and earned the privilege of paying $149 for an official looking letter.

So after five minutes, someone she'd never even met, diagnosed her with a disability.

Within hours, a downloadable letter confirming her psychological need for an ESA arrived via email.

Two days later, a formal letter came in the mail.

WUSA9 took the survey again. This time, answering no to every question asking about stress. We were rejected.

The screen read: "We’re sorry. Based on your responses, you are not a good candidate for an emotional support animal."

But then, the site offered a retake. Not only could we take the psychological evaluation again, the site specifically revealed which answers will get us the certificate.

Instead of taking the test again, we upped the ante. WUSA9 Photojournalist John Mogor requested a certification for his emotional support hermit crab.

Mogor typed into the chat box, "Hi. I’m wondering if there are any limitations on the types of animals that I can certify?"

Karol in customer support responded that there are no limitations.

"An ESA can be any pet that you have a special connection with," she wrote.

Mogor continued typing: "My hermit crab ‘Bill’ brings me great comfort in high stress situations. And I would be like to be able to travel with him to lessen my stress."

So who has the power to stop this?

Well, last summer, the Department of Transportation assembled a panel of advisors to tackle the issue. It disbanded without a solution.