How to see Comet NEOWISE whizzing by Earth for the first time in 6,800 years

A newly discovered comet is flying through the inner solar system for the first time in 6,800 years. 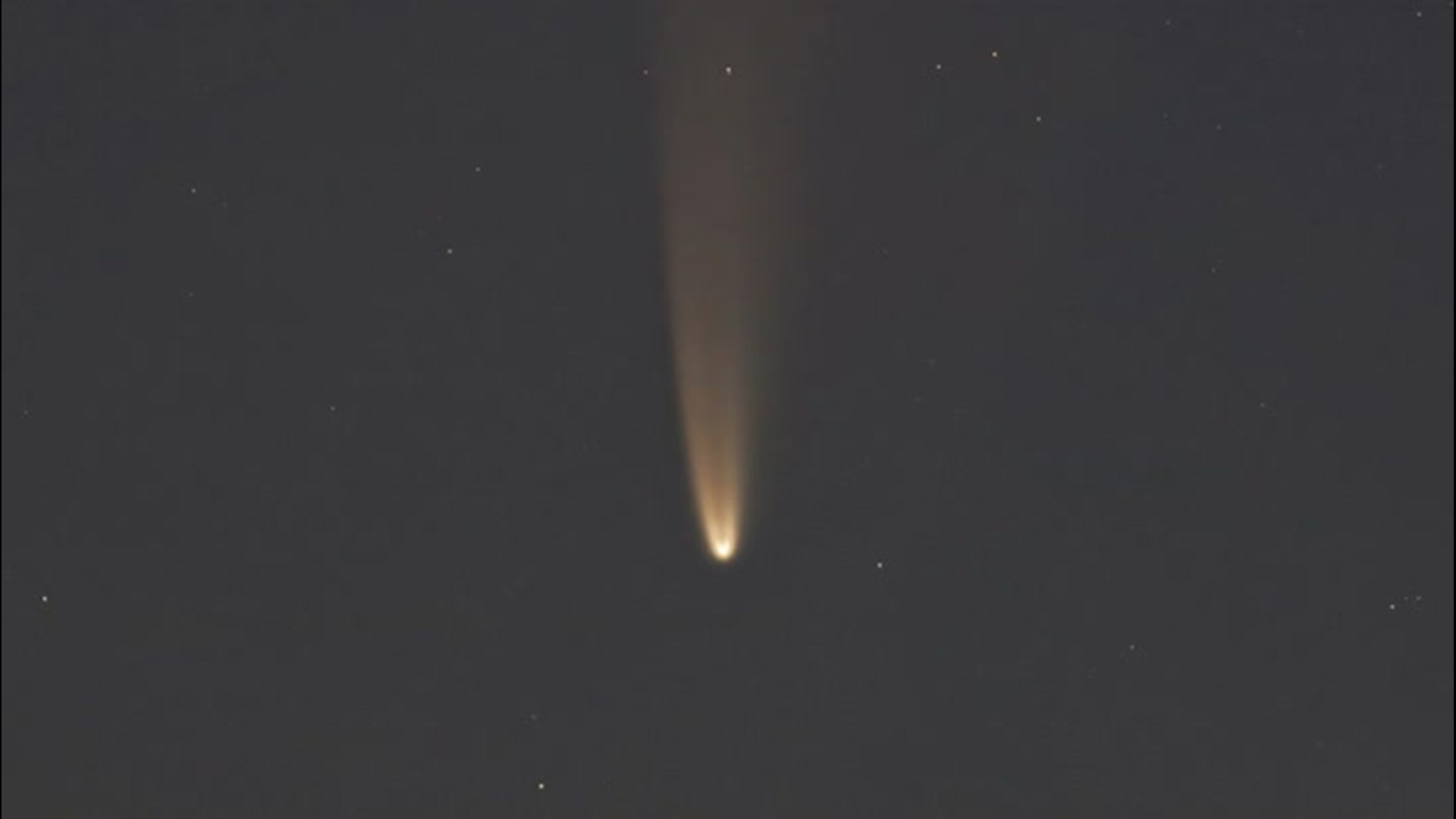 Stargazers have the opportunity to spot a rare object in the sky this month as a newly discovered comet flies through the inner solar system for the first time in 6,800 years.

Comet NEOWISE has been getting brighter and brighter in the early-morning sky, and in the coming days, it will make an appearance in the evening after sunset.

"Comet C/2020 F3 (NEOWISE) - discovered back in March by NASA's NEOWISE mission - is getting the attention of skywatchers across the Northern Hemisphere this month," NASA said.

Earlier in 2020, two other newly discovered comets, Comet SWAN and Comet ATLAS, were showing promising signs of eventually becoming bright enough to see with the unaided eye, but both eventually fizzled. The third time was the charm when Comet NEOWISE was discovered as it has lived up to astronomers' predictions that it could become a visible feature in the night sky.

Comet NEOWISE can be seen with the naked eye, but onlookers need to know what time and what direction to look to see it as it will not be a prominent feature in the sky.

Right now, it is only visible in the early morning about one to two hours before sunrise in the northeastern sky. This may mean waking up at 4 a.m. (local time) to spot it before the comet gets lost in the daylight.

Evening stargazers will be able to see the comet starting on the week of July 13 off to the northwest, just below the Big Dipper.

"From mid-July on, it's best viewed as an evening object, rising increasingly higher above the northwestern horizon," NASA said. "Its closest approach to Earth will be on July 22, at a distance of about 64 million miles (103 million kilometers)." For comparison, the sun is about 93 million miles from Earth.

If cloudy conditions obscure the sky, onlookers can wait until the next night to try to look for the comet as it will be visible throughout the balance of July.

However, people may want to look for it sooner rather than later as it will gradually become dimmer and dimmer later in the month as it moves farther and farther away from the sun.

Many pictures of Comet NEOWISE on social media depict it as a brilliant object filling an area of the sky, but to the unaided eye, it may just look like a fuzzy star with a faint tail.

Many of the images of Comet NEOWISE circulating on the internet were taken over a long period of time by cameras zoomed in on the object.

For people trying to take pictures of the comet, it is recommended to use a long exposure to allow the camera to capture more light, revealing more details of the comet.

A photo with an exposure of 5 to 10 seconds should be enough to capture the glow of the comet and its long tail with detail that the human eye simply cannot see.

Some smartphones are able to take long exposure photographs, either with the built-in camera or with the help of an app. A tripod is also a necessity to keep the camera still for several seconds.

Comet NEOWISE will certainly be an interesting feature to look for in the sky, but it won't be as grand as Comet Hale-Bopp, which put on a spectacular show in 1997.

Astronomers measure the brightness of objects in the night sky using a measurement known as magnitude. The lower the magnitude number a celestial body is given, the brighter it appears in the sky.

As of July 8, Comet NEOWISE had a magnitude of 1.6, according to TheSkyLive.com, a website that provides real-time data on the brightness of objects in the night sky.

For comparison, when the well-known Halley's Comet visited the inner solar system in 1986, it had a magnitude of around 2, according to Scientific American.

However, Comet Hale-Bopp was one of the rare comets to be brighter than a magnitude 0 and was visible to the naked eye for more than a year.

After Comet NEOWISE leaves the inner solar system, it won't return for another 6,800 years.

It is difficult to know when a long-period comet, such as Comet NEOWISE, will come along and put on a bright display in the sky, so be sure to take advantage of this rare opportunity to see a comet before it's too late.