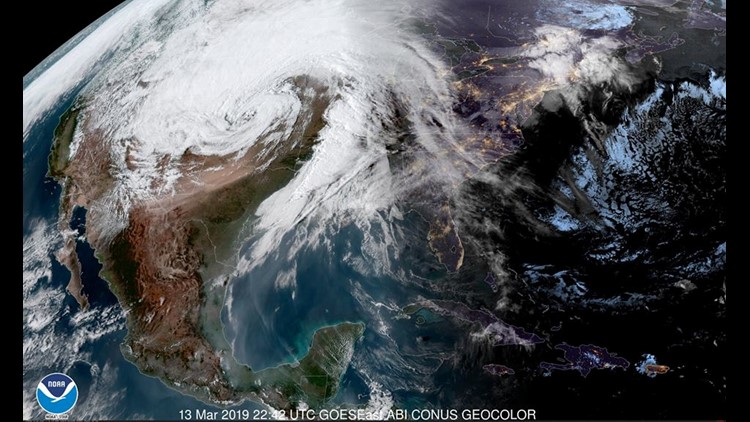 COLORADO, USA — The ingredients for this historic cyclone started coming together on March 12, 2019. A trough of low pressure, that had been dropping south down the coast of California for a couple days,  got cut off near the Baja Peninsula. It then picked up guidance from the Sub-Tropical Jet Stream.

As that cutoff low started moving northeast on the morning of March 12, it was flanked to the north by a new trough starting to bend in the Polar Jet Stream.

These two features would meet up on March 13, to form a monster cyclone on the lee side of the Rocky Mountains.

The mid-latitude cyclone would undergo a process of rapid intensification called Bombogenesis, or Bomb Cyclogenesis, which is when a cyclone drops 24 millibars or more of surface pressure in 24 hours or less.

The greatest 24-hour drop in surface pressure was 33 mb or 1 inch of pressure at 9 a.m. MDT on March 13. It even bombed out in the Denver area. NCAR in Boulder, Colorado measured a 27 mb pressure drop in 24 hours. It is rare for a cyclone to experience this type of rapid intensification in the middle of the country. It is a little more common closer to the Atlantic coast, but even then, it is a rare process.

The bomb cyclone, as it has become known, broke several intensity records in the area. Low surface air pressure is the most common measure of a cyclone's power. This cyclone will break the lowest pressure ever measured in Colorado once it is confirmed. There was a measurement in Lamar of 970.4 mb with a barometer, and a measurement of 968.0 mb using satellite analysis from NOAA’s Weather Prediction Center.

One of those two numbers will verify as the new record because the current lowest pressure ever measured in our state, also in Lamar, is 975.0 mb in March of 1973.

This storm created a classic prairie blizzard for most of northeastern Colorado, as well as parts of Wyoming, Nebraska, South Dakota, and three other states. High winds of 50 mph or greater, spread across a massive portion of the country.

The strongest wind gust measured during the storm was 104 mph at San Augustin Pass, New Mexico, but it also broke a non-thunderstorm wind gust record at Denver International Airport with a 80 mph reading. The old record of 63 mph was recorded on 4 Apr 2009.

This was not a particularly snowy cyclone, but it did create some big drifts on the high plains. Maybe we should start keeping snow drift records. The highest snowfall was 45” on Wolf Creek Pass, Colorado. There was 5-10” on the Colorado plains, and 6-20” in the foothills. The only records for snowfall was 12” in Scottsbluff, Nebraska. That broke the old record there of 9” that had stood since 1913, and 14” in Cheyenne, Wyoming. That broke the old record of 9.3” in 1973.

The snow may not have been impressive, but the rainfall set numerous records in the region, and caused historic flooding in Nebraska. Here’s a list of the rainfall records. All these records occurred on March 13 except Alamosa, Colorado which broke records on consecutive days.