How the Colorado state cold record was verified in 1985

A story of a broken car, a broken thermometer, and a broken record. 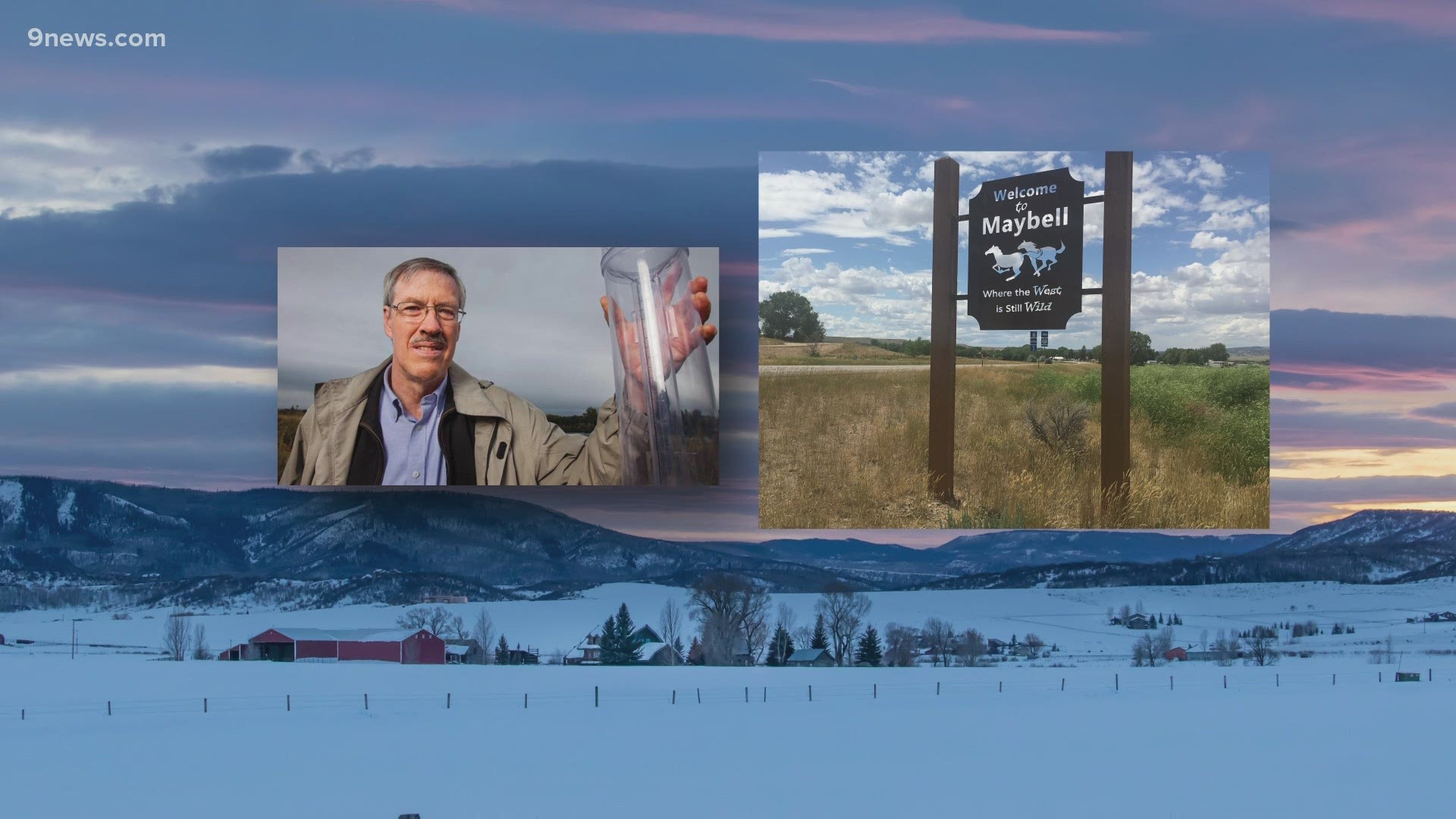 MOFFAT COUNTY, Colo. — Coloradans just experienced a long cold snap with several daily records broken. The lowest temperature in Denver was -16 degrees on Monday, and the lowest temp in the state was -33 in Crook, also on Monday.

That's cold, but nowhere near the all-time state record of -61, which was measured in Maybell on February 1, 1985.

It is the job of climatologists at the Colorado Climate Center to verify temperature records before they can be classified as official, and on that day it was assistant state climatologist Nolan Doesken, his boss, and a meteorologist with the National Weather Service that was tasked with confirming the -61 as a true measurement.

The coldest temperature ever measured in Colorado before that icy day in 1985, was -60 degrees, which coincidentally happened exactly 34 years prior on Feb. 1, 1951. That reading was taken at Taylor Park Reservoir in the Gunnison valley.

Nolan Doesken pointed out that today should be a day of celebration in Fort Collins: the 70th anniversary of the lowest temperature ever recorded at the campus weather station, -41°F on February 1, 1951. I'm confident it won't get that cold in the cold snap later this week #cowx pic.twitter.com/t82uMP4b77

The trip to Maybell from Ft. Collins

"We were scratching our heads," said Doesken. "Could this have really happened in Maybell? That is not a place you would expect to see temperatures that cold."

Doesken said that there are places in Colorado that are repeat offenders of serious cold, and Maybell was not one of them. The cold air usually drains downhill to the west towards Utah.

The high mountain valleys in Colorado are usually where the coldest air sinks to the floor and threatens to break low temperature records. Places like the Fraser, the Eagle, the Gunnison, and the San Luis valleys. Along with North Park and South Park.

So, the trio of weather enthusiasts were eager to travel to Maybell and investigate this unusual reading.

He said the temperatures were brutal and the snow from January had hardly melted at all on the mountains passes. The men encountered their first issue of the trip somewhere near Steamboat Springs.

"We were quickly starting to believe the unimaginable cold temperatures that were being reported," said Doesken. "The radiator in our car froze up and completely broke."

He said by the time they got a repair on the car, it was too late to proceed to Maybell, but they would finish the trek the next day.

RELATED: Record 26 people being treated for frostbite at UCHealth

Doesken said the -61 degree reading was taken by an official COOP weather observer, which is basically a private citizen who is trained to report weather information to the National Weather Service.

“When he read the thermometer that morning, he could hardly believe it, so he brought another person over with him to check the thermometer," said Doeskin. "So, there was a duplicate eye-witness report.”

It turns out, that second eye-witness was very important.

As part of the verification process, Doeskin and his team planned to take the thermometer back to CSU in Ft. Collins and calibrate it in a cold chamber. A way to be totally make sure that the measurements it was taking were true.

There were no digital thermometers back in 1985, the potential record-breaking temperature was measured by a thermometer with a glass tube.

“And the National Weather Service individual that was part of the team accidentally sat on the thermometer in the back of the car,” he said. "It was in the back seat, and just a terrible accident."

Doeskin recalls a moment of shock, and just felt really bad. Their evidence was in pieces.

“Well records were made to be broken,” he said laughing. "Oh but he was so embarresed and so frustrated."

RELATED: Tips to prevent your pipes from freezing (and what to do if they break)

The -61 would have to be verified another way. They had the key second witness, and the thermometers history showed no signs of malfunction. All it's readings over the past few years had matched up well with other measurements from the area, and it fit the meteorological conditions.

“Well we were as confident as we could have been without the calibration, everything else lined up," he said. "In fact, we interviewed many people in the area and they said no it didn’t go to minus 61, it was much colder than that.”

Doeskin said that several ranchers in the area measured temperatures as low as -70 that morning. They were not trained weather spotters though, so they couldn't use those numbers in an official record. It did however, add to the confidence that the Maybell reading was true.

There was also a -60 degree measurement at Taylor Park Reservoir in the Gunnison valley on the same morning.

“So we had every meteorological reason to accept that that was going to be a situation where Maybell could in fact be an amazing cold spot," said Doesken.

Doesken also said the meteorological setup explained how Maybell could be colder than Dinosaur and parts of Utah to the west, where the cold air usually drains downhill.

He said in a normal situation, the cold and heavy air sinks down the Yampa River basin from Steamboat Springs and slides downhill towards the Colorado/Utah state line. But every once in a while that air gets held up, and stops in Craig or Maybell.

"There was a high pressure system to our west that slowed down that drainage flow and allowed the cold air to pool very definitely in specific spots that are normally a little warmer," said Doesken.

He looked through the historical records and found several other examples where Maybell was colder than Craig to the east, and Dinosaur to the west. Proving that the placement of weather systems could trap the coldest air along its decent from the Steamboat area.

There was also a lot of snow on the ground which was unusual for Maybell. Doesken said they got about 10 inches of snow that January, and colder than normal temperatures for several weeks had prevented melting. Thick, white snow cover added an extra ingredient to the cold record formula.

There has been some debate over the past few years among people interview by 9NEWS if school was in or out.

Doeskin said there are some hardy folks living out there but couldn't quite remember if the kids were out of school.

Moffat County School District echoed those thoughts but said even they have to draw the line somewhere. They sent us a picture of a message board from a Craig elementary school reminding kids to bring a jacket to school because recess will be outside until it drops below 10 degrees.

Recess must go on! Well unless it's -10. That's where they draw the line in Moffat County #9wx pic.twitter.com/ircAPVtHgo

A school administrator said she was almost certain that the entire Moffat County district was out of school. She forwarded a link to a local paper that interviewed a school custodian who said all the schools were closed that day due to low gas pressure in the natural gas lines.

"Everything about that situation was wild and extreme," said Doesken. "Many of the cattle ranchers we spoke to had their diesel engines locked up, but they still had to make sure their livestock was OK."

Truthfully, the answers have been all over the place on this because everyone we talk to has different memories of what happened -- that was until we talked to David VanSant, who confirmed schools were open.

“I remember from that day that we did have school. It was just plain colder than billy hell and… you know, when you say did the kids come to school? The parents used their own judgment. If they were some of the ranching kids that weren’t coming all the way in, I don’t think they came in, but school was open,” VanSant said.

He was the assistant superintendent for Moffat County Schools for 11 years, from 1985 to 1996. 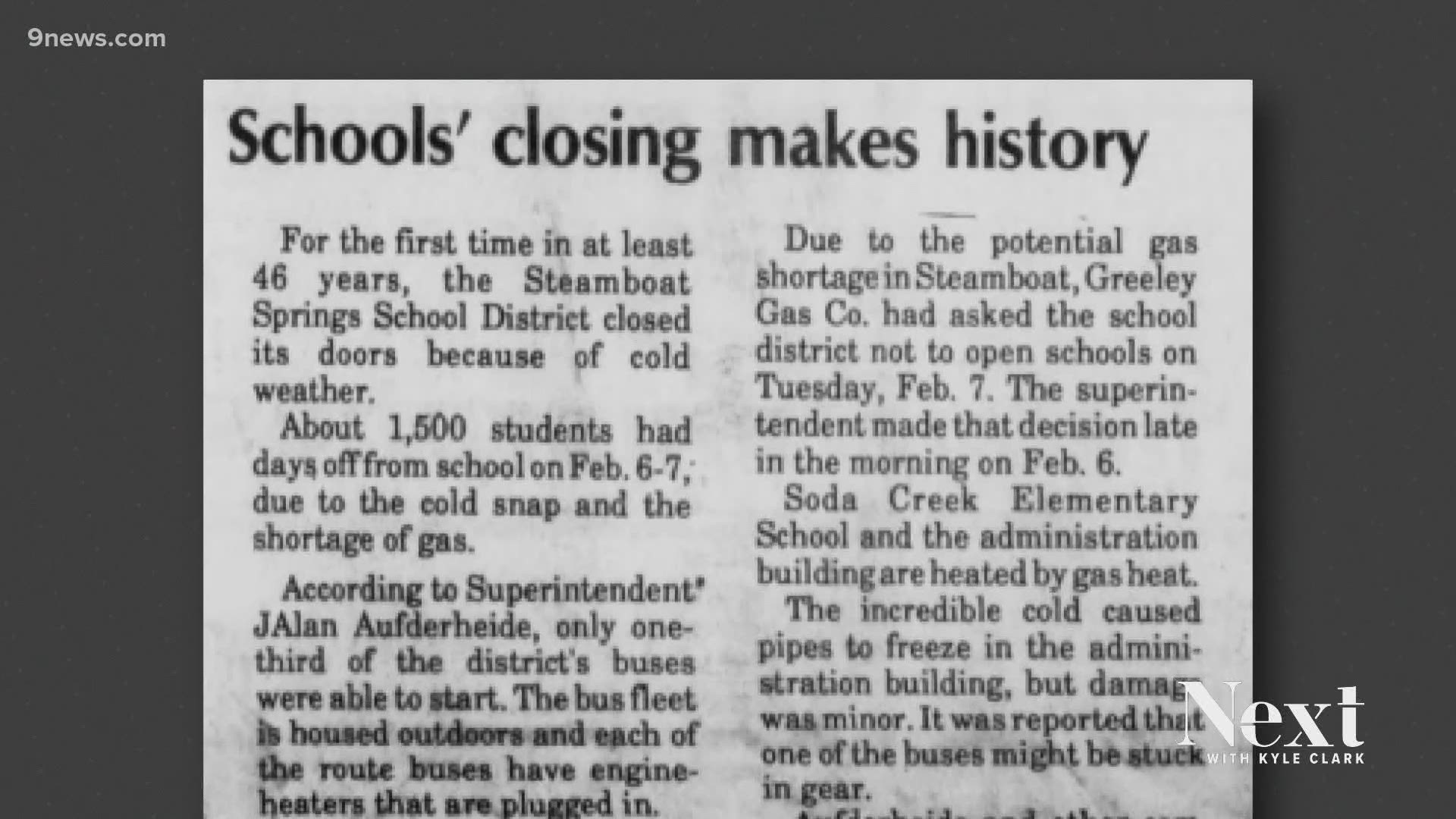 VanSant understands why some people remember schools being closed. He thinks they could be confusing this day with a February day in 1989, when the temperature was at -51 and gas pressure dropped.

As for his thoughts on people in Denver talking about what happened back then:

“It’s interesting because most people on the Front Range don’t know where Craig and Maybell are, and they haven’t been up there, and I can tell you that they’ve missed one of the most beautiful places in the whole state. And you know the weather is great in Craig from April 1st until about September 30th. And after that, it’s pretty darn cold.”

Maybell on the map

Doeskin said that he and his team at CSU ended up confidently verifying that record which still stands today as the coldest temperature ever measured in Colorado. Despite the whole thermometer issue.

"It's unfortunate that we were never able to confirm that beyond a shadow of a doubt, but everything lined up," said Doesken. "The stories, the other measurements, the history of the thermometer, and the meteorology."

And so when they made it official, the town of Maybell decided to own it.

"They were all proudly wearing t-shirts the next summer that showed them being the record cold spot in the state. They said if we're going to be this miserable we might as well flaunt it," he recalled.

He said there was also a banner that hung outside of the Maybell general store for years, but the spotlight of that record has dimmed over time, the banner is gone, and there is no sign of t-shirts that once tempted motorists to stop in for a moment.

"Most people would just keep right on driving down highway 40 and not notice the town," said Doesken. "At least they tried to make a little business out of it, and I think they accomplished that to a certain extent."