9 awesome walks to see fall colors in and around Denver

Here's how you can go leaf-peeping without driving up to the mountains.

KUSA — Peak season is pretty much over for leaf peepers in the mountains, but there's still some to see fall colors around the Denver metro area. The last weekend of October is supposed to warm and dry, perfect for a walk.

Here are some walks you can take to explore some fantastic Denver neighborhoods and take in the fall season – as well as a recommendation for where to get a beer since hey, you’re there anyway!

RELATED: Colorado fall colors guide: where and when to see the best fall foliage

GUIDE: 9 hikes where you can see fall colors in Colorado

This neighborhood isn’t just home to millennials on single-speed bikes and $1,500 studio apartments. Meander through tree-lined streets and check out the older architecture in this pedestrian and bicycle-friendly neighborhood.

One cool walk is to start at Governor’s Park and to meander north to 13th Street before heading east to Cheesman Park, and then beginning a loop back.

It’s around 4 miles, but this is Capitol Hill, so there are plenty of coffee shops and bars to explore along the way.

For a beer: Lowdown Brewery gets bonus points for also having pizza and, if you’re the type of person who likes to sing “Picture” by Kid Rock and Sheryl Crow in front of an audience after leaf-peeping, it’s conveniently next to Armida’s.

RELATED : Fall in Colorado: 9NEWS guides to all things autumn

Yes, this one is a classic, but it’s such a classic that it would be a shame not to mention it.

In addition to an awesome view of fall leaves, there’s epic people-watching here, what with all those hyper fit folks who come here specifically to show off.

Grab a cup of coffee and earn some Denver points at this iconic spot.

For a beer: Platt Park Brewing Company isn’t far from the park at 1875 S. Pearl St.

This is an area with Denver that it a combination of the old and the new, from the super cool bungalow houses of our city’s past to those modern developments that many of us can’t afford to even look at.

Like Washington Park, Sloan’s Lake is a slightly more down-to-Earth place for people watchers – and it also has the benefit of super cool leaves and a unique view of downtown Denver.

For a beer: Joyride Brewing is right across the street from the lake at 2501 Sheridan Blvd. in Edgewater.

The Lower Highlands and Jefferson Park neighborhoods are another part of town that are changing rapidly, so this is a walk that gives you a taste of Denver – in addition to a cool look at stunning fall colors.

For this walk, park near the big REI (where you can also buy some Colorado-ish flannels, if that’s your thing) and head south on the Platte River trail. When you get to Mile High Stadium, following the path around the facility and then head up Clay Street. In a few blocks, you’ll hit Jefferson Park and – if you’re thirsty – Briar Commons Brewing. From here, you can either head back to your car down 23rd Street or keep going up Clay until you hit Speer and then 29th Street, which will take you over Interstate 25 across the Highlands Bridge and then back into LoHi.

For a beer: You have a few options here. Briar Common Brewing is at 23rd and Clay, Zuni Street Brewing is near 29th and Zuni and Denver Beer Co. is just a block from REI at 1625 Platte St.

This is another classic walk in Denver, but we’d be remiss if we didn’t include it. Take a walk around Denver’s City Park for outstanding views of the skyline and the Front Range, as well as multi-colored leaves blowing in the wind.

A walk around the park is around three miles, but there are plenty to side paths to make it longer or shorter if you choose.

For a beer: This list is about to get a whole lot classier. You won’t find any beers on tap at the PS Lounge at 3416 E. Colfax Ave., but you will get cheap drinks (think PBR), a free shot and a rose (if you’re a lady). This iconic cash-only establishment also happens to have the best jukebox in town.

There are lots of epic stretches of the Highline Canal trail, which runs for 71 miles between Aurora and Washington Park.

The stretch from Orchard Road to East Belleview Avenue is absolutely classic in the fall, with stunning mountain views and gorgeous colors. It’s around four miles round-trip.

Another great stretch nearby is from Belleview to East Quincy Avenue near Kent Denver School, but for the most part, you can’t go wrong on this gravel trail.

For a beer: Denver’s suburbs are underrated when it comes to breweries, and if you want to try quite a few at once, head to Parry’s Pizzeria and Bar at 5970 Holly St., which isn’t far from where you can park to hit the canal trail.

Yes, this mountain is pretty much devoid of foliage, but this spot close to the city gives you a pretty great view of the fall colors from above.

This is a fun hike because it’s basically “choose your own adventure.” A hike to the top and then down via the Summit Loop is around five miles, give or take, but there are multiple places to cut it short. Either way, you get an awesome view of downtown Denver and the colorful trees below.

For a beer: The aptly named Green Mountain Beer Company is located nearby at 2585 S. Lewis Way.

The South Platte River Trail runs from Chatfield Reservoir to north Denver, with awesome views of the mountains and trees along the water.

Some of the highlights include Riverside Cemetery in the Elyria-Swasea neighborhood, where many of Denver’s earlier pioneers were laid to rest.

Farther south, the trail gives you a look at Hudson Gardens and Chatfield State Park.

For a beer: If you’re on the south end of the Platte River trail, check out Living the Dream Brewing, which isn’t far away by way of Santa Fe Drive.

This is another walking and biking path that’s pretty obvious, but you’ve just got to include.

Some of the best stretches are north of downtown and toward the Cherry Creek Mall, especially as you get near Holly Street, where there are plenty of trees that will give you your fall fix.

This trail, unlike the Highline Canal Trail, is mostly paved.

For a beer: The Bull & Bush Brewery has one of those bars where you literally don’t know what time of day it is, which gives it automatic inclusion on this list. Try a “Man Beer” – even if you aren’t a dude.

Once you get some stunning photos of the fall colors in town, UPLOAD them to Your Take! 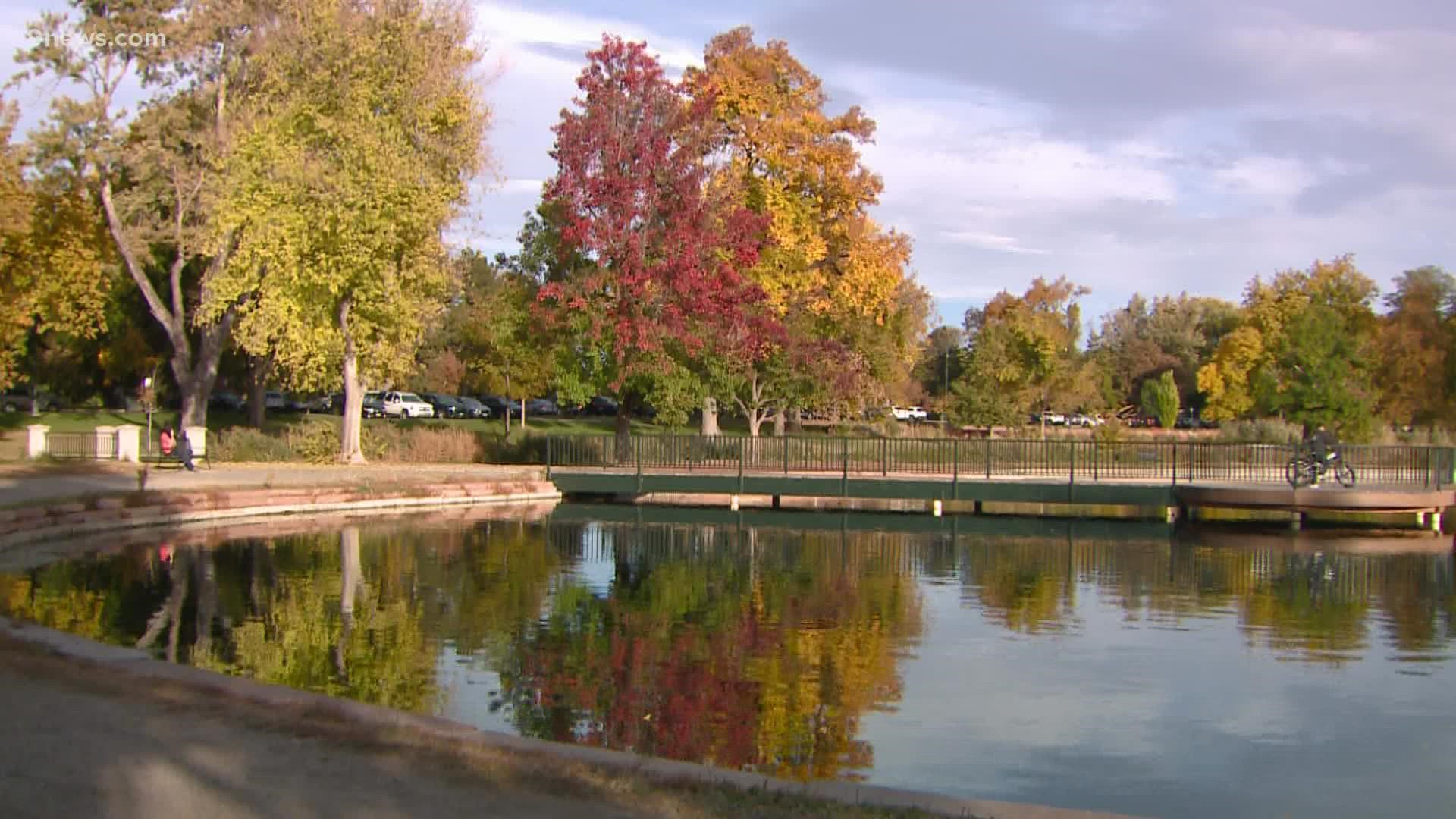