What a warm fall means for Colorado's leaf-peeping season

Last year, the colors in the mountains started to change early. But this year is a little different. 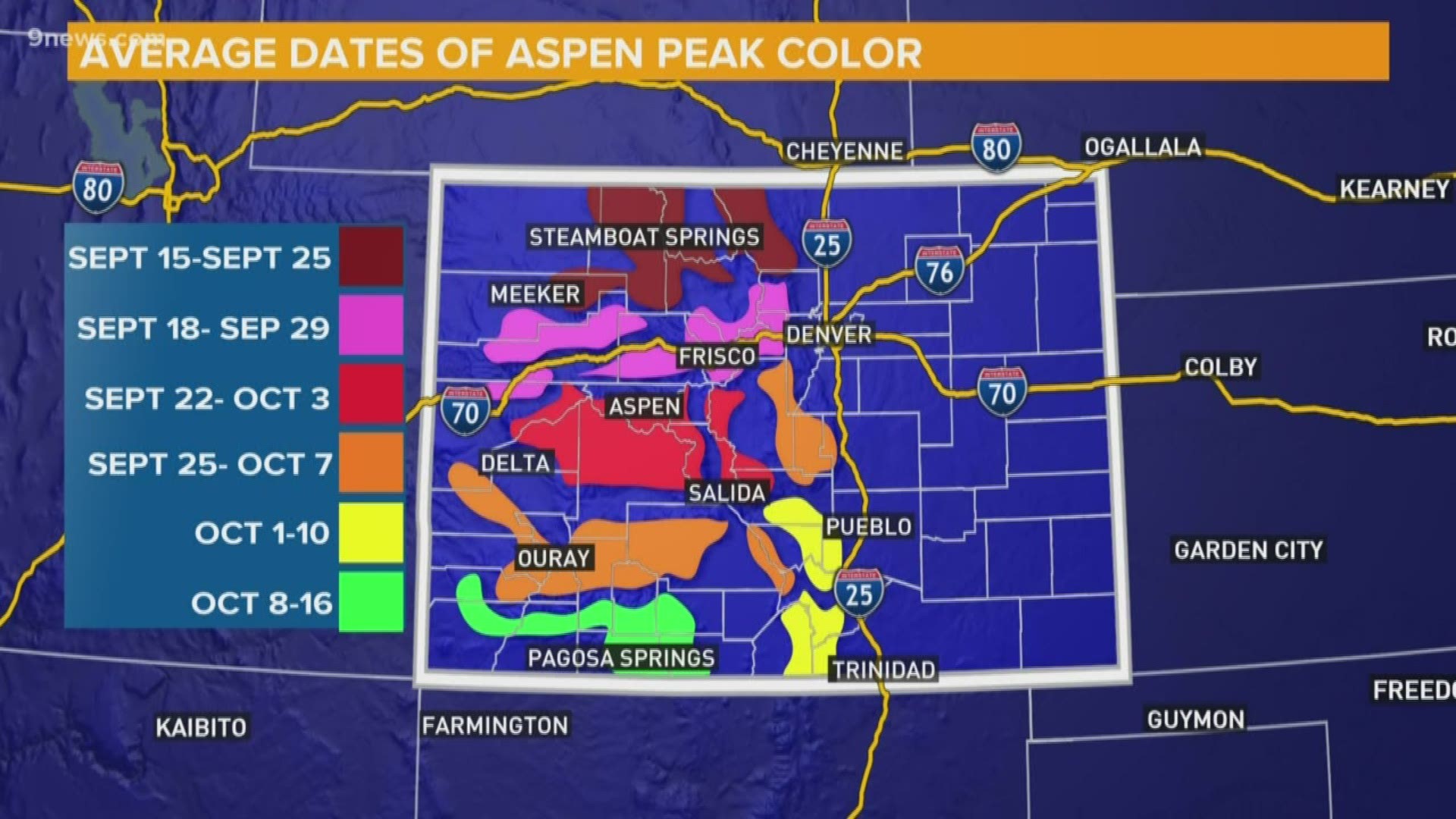 After a record-setting, hot weekend it's hard to imagine that we are about to start to see the leaves change colors across Colorado.

The leaves will begin changing in our northern mountains next weekend.

And while it didn’t feel like it, meteorological fall began on Sunday.

"We have not had a colder-than-average fall in the last ten years," she said. "So we definitely see warm falls, that is a consistent pattern with us lately. I have pretty good confidence that that's a trend that's going to continue that we are very likely going to have a warmer-than-average fall.”

Last year’s drought meant an early start to the fall color change. Thanks to a great snow pack, that won’t happen this year.

The colors should begin to change right on schedule.

As for the rest of the season, the Climate Prediction Center has above-average precipitation forecast for Colorado’s fall.

“The climate prediction center was putting that enhanced, above-average precipitation over the southwest which would extend up over the four corners and into Colorado based on warmer sea surface temperatures in the Pacific that they thought might bring extratropical cyclone activity," Bolinger said. "That would bring that moisture up from the southwest. That doesn't seem like it's going to be happening in the next few weeks. My feeling is that it's more likely that with warm temperatures, you're going to be under that large ridge of high pressure which is going to prevent a lot of precipitation activity. And I wouldn't be surprised if we actually continue this drier than average period that we've been in.”

Warm temperatures may also mean warmer nights. We need cool nights in the mountains to get more vibrant color. So, Bolinger thinks this may not be the best forecast for a spectacular fall color season.

RELATED: 9 awesome walks to see fall colors in and around Denver

The trees were very healthy, we had a very warm first couple of weeks in September, so the leaves changed in gradual stages. For those great fall pictures, you want an entire hill to change at the same time.

PHOTOS: Your fall colors pictures from across Colorado

Bolinger is not just talking about Denver when she speaks about our warmer-than-average fall seasons for the last ten years.

It is true, Denver’s official temperature readings have come from different sites over the last century.

“There is something to be said about the changing record there, but it's something that we are seeing all over our state, not just in the cities but in the rural areas as well," she said. "So we're pretty confident in that signal being real.”

Impacts on the eastern plains:

Fall isn’t all about the colors in the mountains!

A warm forecast is good news for residents on the eastern plains.

According to Bolinger, “A bit of good news is that we go into a warm fall, all the late planting of corn that occurred on the eastern plains of Colorado, they are less at risk for damage from a freeze event.”

What about the snow pack?

Snow will begin to fall in Colorado’s mountains in October and November.

But a warmer-than-average fall doesn’t automatically mean a slow start to the mountain snow season.

“I did look through our snowpack data for the past ten years," Bolinger said. "And despite the fact that we've been consistently warmer than average in the fall, it's been a pretty mixed bag if we start off the snow season good or a little rough.”