If you've asked, are the leaves changing colors early this year? The answer is yes. We've compiled this FAQ for the most common questions about 2018 fall colors season in Colorado.

KUSA — You have questions about fall colors, and we have answers. We have compiled information gathered from interviews with Dan West with the Colorado State Forest Service, and Dr. Danica Lombardozzi, a plant ecophysiologist with the National Center for Atmospheric Research.

Are the leaves changing early?

Yes. Almost the whole state is seeing trees turn early due to drought.

WATCH | When will the aspens peak? We've got some insight for you.

How does drought change the leaves?

WATCH | Are fall colors coming early due to drought?

Can the thick wildfire smoke be impacting the leaves?

Wildfire smoke likely has little to no impact. Logically thinking, it does make sense, because the amount of light is being reduced, but the smoke just wasn’t thick enough, for long enough in Colorado to make much of a difference.

How does temperature affect the leaves?

Temperature has little impact on when the leaves turn, but it does play a major role in how vibrant the colors are. Cooler nights, and it does seems like low temperatures in the mountains have been running just a bit cooler so far this season, can make those colors really pop. This is especially true for the reds and purples, as they are thought to be created as a sort of an anti-freeze by the leaves.

Can the drought dull the colors?

Yes, drought is known to reduce the vibrancy, and overall health of the leaves. There are likely just patches of badly drought-stressed trees in the northern half of the state (probably the ones that changed really early), so the color might still be good there, especially with the cooler nights. Don’t be surprised if the colors are just a little dull down in southern Colorado.

Can drought impact the length of peak colors?

The peak is considered to be the time when the greatest number of trees in an area are in their most vibrant color stage. After they turn, the leaves can stay on the trees for about two weeks or maybe a little longer. A drought-stressed tree can have a very weak bond between the brand and the leaf steam, so those leaves can fall off almost immediately. This is not always the case, but the peak period has a better chance of being shorter in times of drought.

How does this year compare to 2017 which was considered to be a weak color year?

The 2017 season had a couple of issues dulling the season, even though the trees were pretty healthy. In one sense, they were almost too healthy. That coupled with a very warm first couple weeks in September, caused the leaves to change in very gradual stages. It is best if an entire hill or an entire hill changes all at the same time.

The other issue was wind. A few big wind storms put a quick end to the peak. If you waited for the last week of September in northern Colorado, you were too late.

Wind is always a risk of ending the peak of fall color in Colorado, but the leaves are expected to turn more in unison this year.

Where does the yellow, orange, red, and purple come from?

The yellows and oranges are already there on the leaves, it’s just masked by the green during photosynthesis. In the late summer, when photosynthesis is slowed, the green disappears, revealing the oranges and yellows.

The reds and purples are created by the leaves after the green disappears.

If I miss the peak, is there anything left?

Yes, the peak is just the time with the most leaves. It’s not like all the leaves hit the ground right away. After the peak has passed, there are still billions of leaves to be seen. The peak is so good though.

Experts are very careful not to put specific dates on the color peak, because they say that there is too much variability, even in normal years. The middle of September is always a good bet for the aspens in the Colorado high country, even in drought years. We did create a map for you though based on the information that was given to us by the experts, and also from observations already being made by 9NEWS employees and viewers.

Please continue to post, upload, and tag 9NEWS in your leaf pics with a date and location, so we can make adjustments to our forecast if needed.

It’s the length of the days that signals the leaves to turn, and since that never changes, the leaf season rarely changes either. Unless there is drought or disease affecting the trees.

This year, 75 percent of Colorado is in a terrible drought and that is impacting the fall color. The leaves are turning early in most of the state, which means the peak will be early too. When and where will vary greatly, as not all trees are affected by drought in the same way, but for the most part, we can use the drought map has a guide to change.

There is usually a progression of colors from the north in mid-September, to the south where peak colors can last into the middle of October.

The most severe drought is in the south, so essentially, they will catch up with the rest of the state.

Look how the map changes for this year. We may be just a little bit early in the north, and we could get into the peak as early as next weekend, the 8th and 9th of September.

Just a little early in the Central mountains as well, but it’s in the south, where the drought is severe and even exceptional, that there is the most unknown.

Experts have said that those leaves could peak even before October, which is unusual for down there. They also say the leaves might not last long, once they peak.

The leaves can stay on the trees for 2 or 2 and half weeks sometimes after they turn, but we’re not sure how long they will last on those trees with severe drought stress.

If you go out this weekend, you will get a decent show but probably not the peak yet. Just keep in mind that we could get some storms on Saturday, which could be good if you like those pics with the gold and white contrast. A dusting on those peaks is not out of the question this weekend. 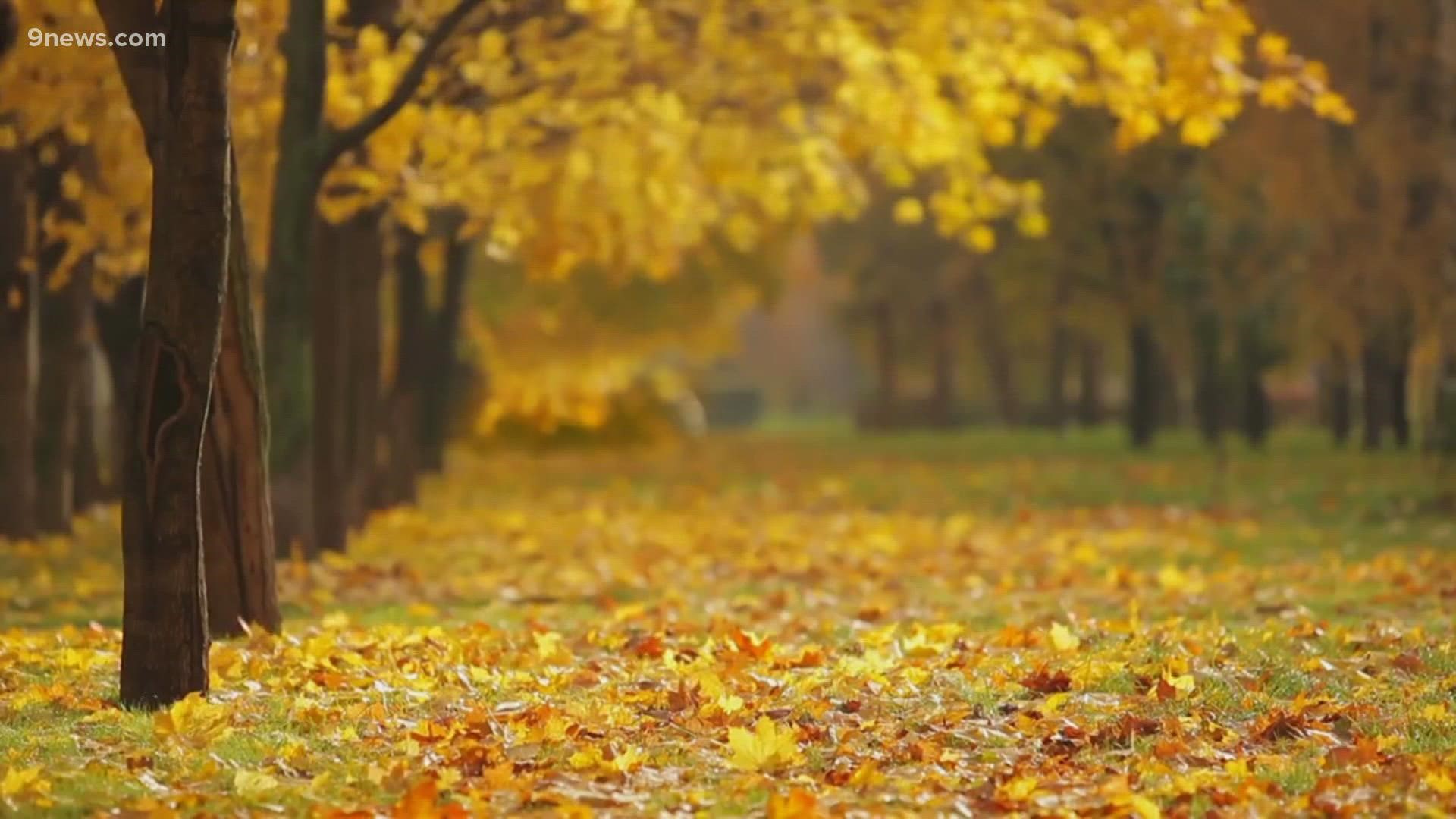 The science behind Colorado's fall colors