Hottest temperature ever recorded in Colorado under review

Experts work to verify a high temperature of 115 degrees that was measured at John Martin Reservoir in mid-July. 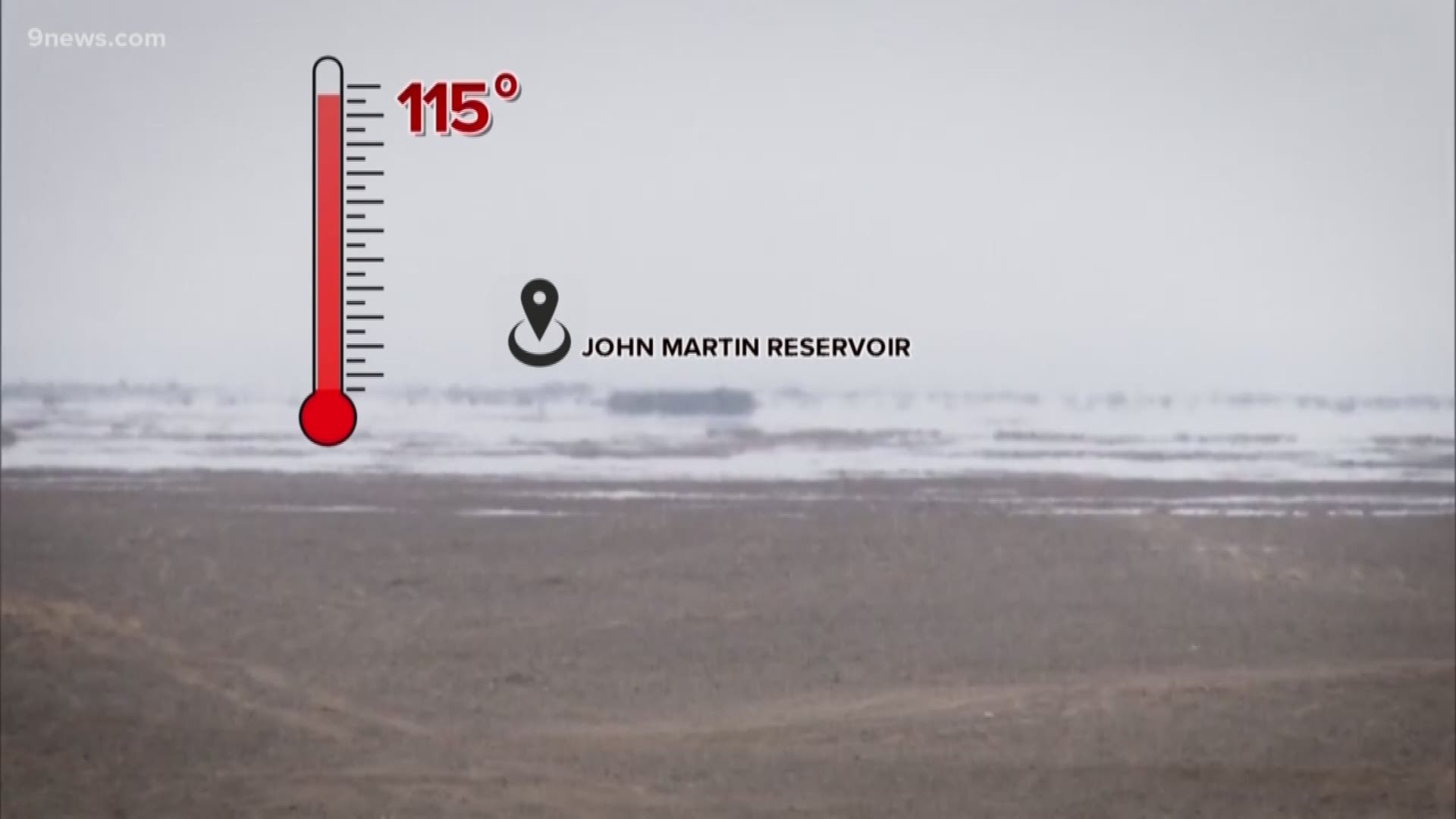 BENT COUNTY, Colo. — Editor's note: An earlier version of this story listed the date of the 115-degree temperature incorrectly. The article has been updated to include the correct date.

The thermometer spiked to 115 degrees at John Martin Reservoir on July 20, but in Bent County, where triple digits are normal, it slipped passed the media, the National Weather Service (NWS) and the Colorado Climate Center.

“I didn’t have the siren go off in my office. 'Beep, beep, beep, we have a new temperature record,'" said assistant state climatologist Becky Bolinger, joking about how there is now automatic alerts.

The first indication that they got was on a Twitter feed. Bolinger just happened to notice a tweet sent out by Ian Livingston that showed a map of the toasty high temps for July across the U.S., and Colorado was tagged with a 115 degrees.

Those records will still stand until the 115 degree reading can be verified by a panel of experts: Bolinger and Russ Shoemaker from the Colorado Climate Center, a meteorologist from the National Weather Service in Pueblo, a person from the High Plains Regional Climate Center, people from NOAA's Central Region Headquarters, and also someone from the National Center for Environmental Information.

“It’s gonna be a lot of people really looking at it, and investigating, and we kind of do a vote at the end,” Bolinger said.

There are a few items that they will need to investigate, the actual sensor is not in question though. It is a coop weather station, meaning it is run in cooperation between a private citizen, and the NWS.

"We have a great deal of trust in these coop sensors. The National Weather Service makes sure they are placed in an acceptable area, and that they are well maintained," Bolinger said.

The sensor on the east side of John Martin Reservoir is located in a sandy area. The preferred spot for a weather station would be in a grassy area. So the panel will look into that, and make sure there are not any other things that could create a contaminating micro-climate.

A station in nearby Lamar registered a daily record with a 111 degree high temperature on July 19.

"Is it possible that another area that close by could hit a temperature 4 degrees higher? That is something we'll be looking closely at," Bolinger said.

Another factor they would like to look into has to do with the observer. That station at John Martin Reservoir has been in operation since 1942, and spits out the data onto a thermograph. Instead of an automated number, a person has to look at a line graph on a paper print out.

"Human eyes are not perfect but we have high confidence in this observer, and we know that he verified it with two other observers to be sure," said Bolinger.

They might just have to take his word for it though, because the thermograph with the data on it, may no longer be available to the investigators.

"He didn't really know that when taking that observation, that it could be making history," Bolinger said.

Bolinger said it could take up to another month to verify the record.

The last time that state climatologists in Colorado had to verify a record was in 2013. In that case, it took them four years to confirm the 24-hour precipitation record. 11.85 inches fell in Ft. Carson on September 12, 2013. Precipitation records are harder to confirm though, and that station was a USGS sensor, not an NWS coop station.

On February 1, 1985, a new minimum temperature record was posted in Maybell, Colorado. The state climatologist at the time, Nolan Doesken, verified that record.

Other all-time heat records in 2019