Scientist: Geography and elevation is no excuse to live with dirty air on the Front Range. 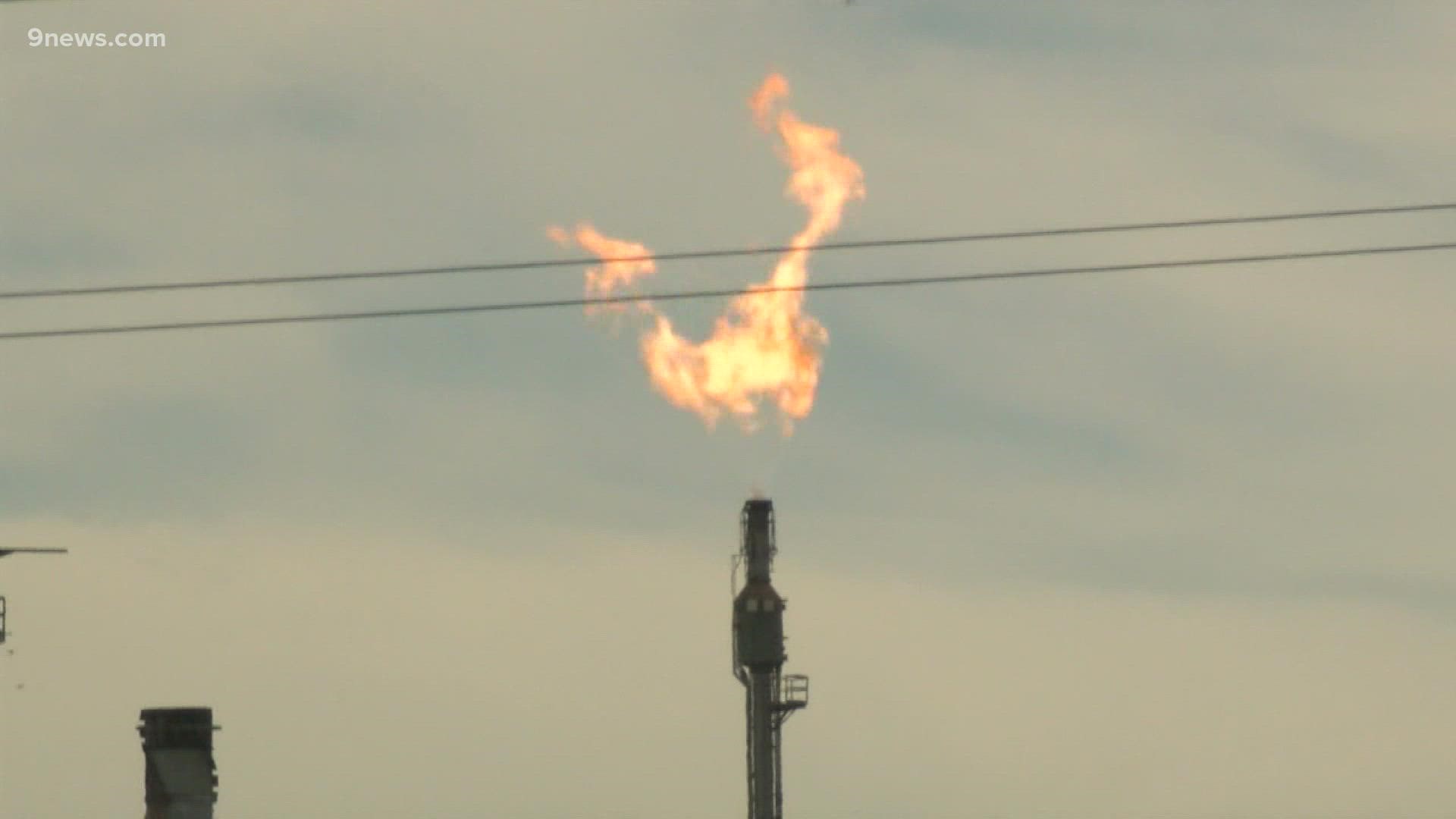 DENVER — The air quality in Denver metro area has reached the "Unhealthy" level 18 times in 2021, and 14 of those dirty air days were because of ground ozone pollution.

The Unhealthy threshold on the Air Quality Index (AQI) is 151-200. The Colorado Department of Public Health and Environment issues an air quality alert if the AQI is forecast to reach the Unhealthy for Sensitive Groups level, 100-150.

Scientists said the more heat and sunlight there is – the higher the ozone levels will be. So as the climate warms, the ozone problem will get more difficult to solve.

A new study published Friday shows just how much impact climate change has on ozone on the Front Range.

The research used computer modeling to run an experiment that took Denver’s climate from the 1950s and placed it over the city's cars, industry and population from 2010 to 2019.

“And it turns out that if we had the climate we had in the 1950’s, our ozone levels would have been lower than what we actually experienced,” said James Crooks, a research scientist with National Jewish Health.

The biggest climate change factor from the study was that daily high temperatures in the Denver metro have increased by an average of about 4 degrees Fahrenheit since the ’50s.

Ozone levels are highest during the hottest part of the day -- and the days are projected to become even hotter as climate change worsens.

“And therefore, it will become harder and harder to control ozone unless we take pretty aggressive action now," said Crooks. "So the longer we wait, the harder this problem will be to solve.”

Crooks said that the Denver metro area and Front Range of Colorado have struggled to meet two ozone standards set by the Environmental Protection Agency (EPA).

In 2015, the EPA lowered the ozone standard in the country to 70 parts per billion (ppb) in an 8 hour exposure. Which means that is the limit that they consider acceptable for human consumption.

Crooks said they allow an area to violate that standard three times per year. Anything higher would risk a penalty called non-attainment.

Crooks said that standard is being enforced in Denver but so is the old 2008 standard of 75 ppb. And while the many other major cities have managed to clean their ozone problems in recent years, Denver is in non-attainment for both standards.

He said that Denver was making progress towards complying with the 2008 standard towards the end of 2019, and might have been able to get into attainment by 2025.

But the results of the study showed that climate change would have set that attainment goal back by two years. He said that delay would also apply to the 2015 attainment goal.

He added that Denver seems to have taken a big step backwards in 2020 and 2021 which may push those attainment goals forwards even further than what the climate did from 2010-19.

He said we are disadvantaged because our geography and elevation favor sunnier summers, but that is no excuse to live with dirty air because most of the sources of ozone pollution are under our control.

He said that would also help in the long term because reducing fossil fuels will help mitigate climate change.

“So we really kill two birds with one stone by reducing our fossil fuels,” Crooks said.

The study also found that specific neighborhoods with the most climate-generated ozone were Hispanic communities and people already suffering from diabetes and asthma.

“These communities that are already suffering disproportionate burdens have yet another burden on top of that," he said.

Crooks said that ozone is a gas, so it's not easy to compare the its dangers to the dangers of particle pollution like PM 2.5.

"Overall it may not be quite as dangerous," he said, "But the thing about ozone is that it is a respiratory irritant and it's an extremely reactive gas so it tends to react very aggressively with the tissues in your lungs."

He said the ozone can put people with chronic lung conditions like asthma or COPD into risk of a serious exacerbation that could send them to the hospital.

Crooks also said that you do not have to have a preexisting condition to experience symptoms of ozone exposure. Coughing, wheezing and shortness of breath which can lead to fatigue.

He said the best thing to do to avoid ozone symptoms is to reduce your length of time you spend outside and not to over exert yourself physically. Also, unlike recent studies that show that PM 2.5 (wildfire smoke) can be just as bad indoors as outdoors, he said going indoors is a good way to escape ozone pollution.

"The main reason for that is simply that there is less direct sunlight indoors," Crooks said."Ozone really depends on that sunlight to form, so if you take that away, it degrades into other gases."

RELATED: 17 Denver schools release early or are closed Friday due to heat