The good and the bad that comes with record snowpack

Colorado swings from one extreme to another in just one year. That flips concerns and complaints 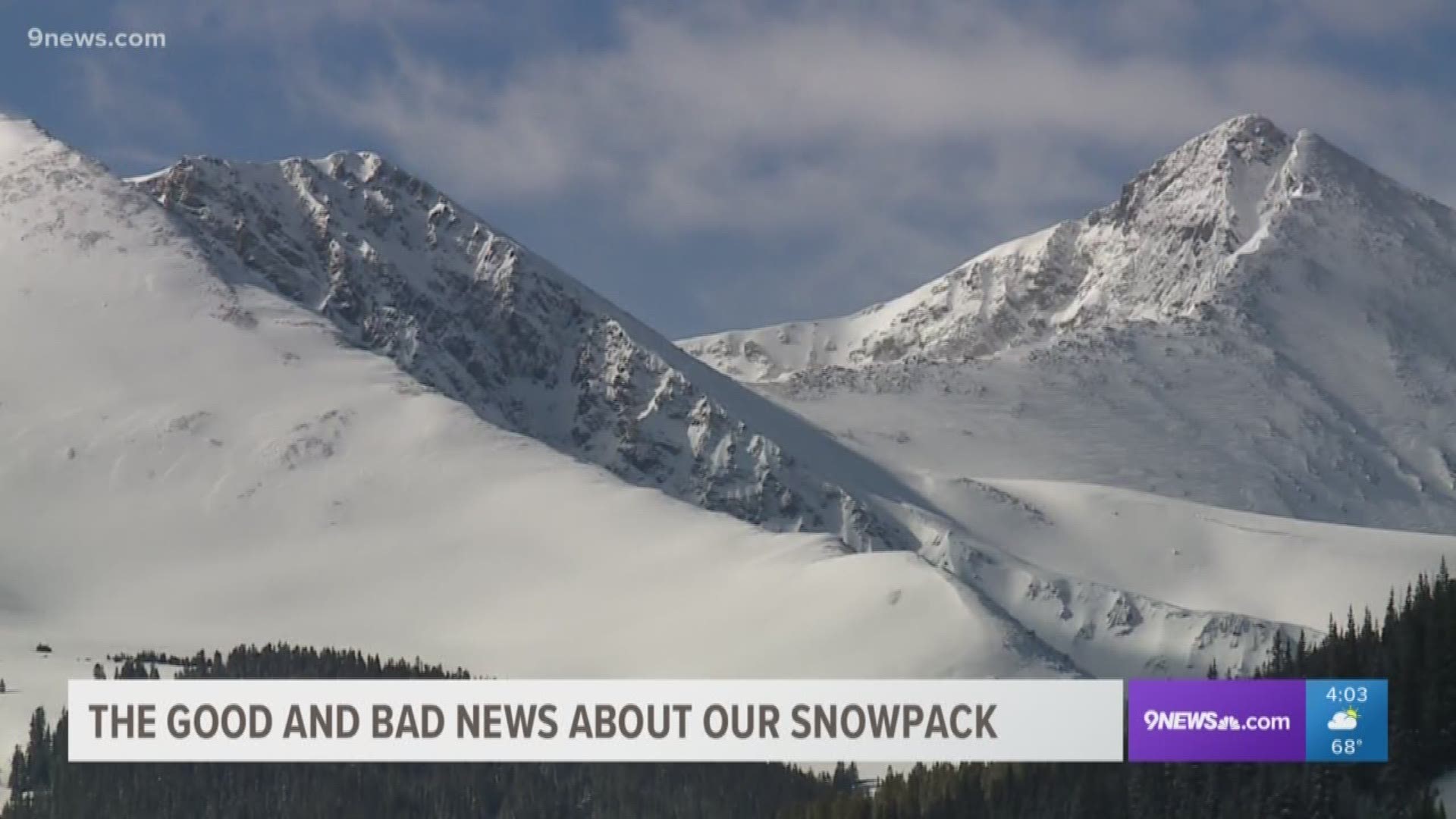 COLORADO, USA — Of the 115 snow telemetry (SNOTEL) stations in the Colorado high country, 22 show record high snowpack for May 30. And many of the others are close to a record.

That is mostly good news but could potentially lead to some bad news too.

It's good news for our water supply. The Colorado Climate Center said that most of Colorado's reservoirs with likely refill with the snowmelt.

"If there is any doubt on any of our reservoirs, it would probably be Blue Mesa which is our biggest reservoir, and was also the hardest hit by the drought last year," said Becky Bolinger, the assistant state climatologist at the Colorado Climate Center at Colorado State University.

The rest of the good news stems from what that record snowpack has done for our drought. Colorado entered the winter will the highest level of drought, and it was widespread across the state but significantly worse in the southwest.

Now this week, Colorado is 100% drought-free for the first time since the National Drought Monitor was developed 19 years ago. There are even no areas categorized as Abnormally Dry, sometimes referred to as D0 drought.

It's good news for outdoor recreation. Even though the rafting season is off to a slow start, the forecast is for an extended season lasting into the late summer. And we might be able to bring the campfires back to summer camping, a common complaint in 2018 as burn restrictions covered the entire state of Colorado.

And now for the bad news.

“The concern starts to set in on how the snow melt might not behave as much as we like it too when the temperatures get really warm,” said Bolinger.

The first strong ridge of high pressure we’ve seen in a while is starting to build. That means lots of sunlight on that frozen reservoir during the next 6 or 7 days.

“It’s not going to be a smooth ride to melt off,” said Bolinger.

Bolinger says the longer the snowpack sits into June, the more likely it is to come down faster as Colorado heats up. That will lead to at least minor river flooding on the eastern plains, usually Weld and Pueblo Counties. But, major and damaging floods only remain a potential problem at this point. Bolinger said that scenario will likely need at least one additional factor.

“You increase the risk of having a rain event on the snow," said Bolinger. "If rain on snow happens, that also increases that rate of melt, and you’re just more likely to get that in June.”

Bolinger said other additional factors contributing to bad flooding could be burn scars, avalanche debris, and dust layers in the snowpack.

Bolinger also pointed out that while we have seen a strong recovery in the climate and hydrology perspective, it's still not a quick fix on the people.

"There are still people suffering impacts from last year’s drought. Unfortunately, high snowpack and precipitation doesn’t wipe out those impacts, particularly in agriculture."