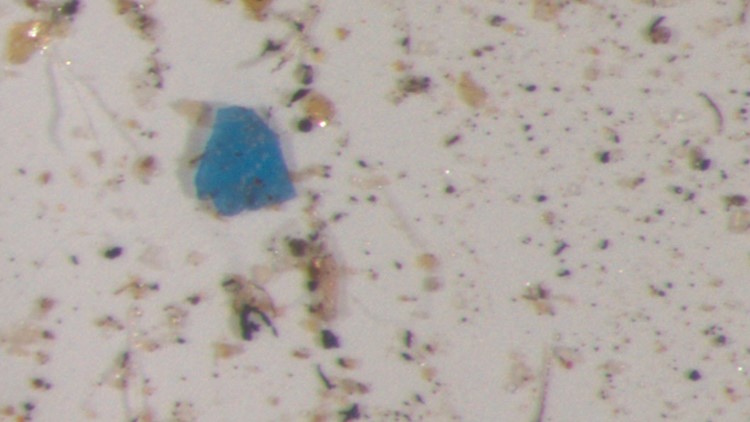 At least that’s the title of a report published by the United States Geological Survey (USGS) after their scientists found tiny plastic particles in Colorado rainwater.

USGS chemist Greg Wetherbee was researching nitrogen pollution in rainwater samples when something else caught his eye.

“I was pretty amazed to see all colors of the rainbow in terms of microplastics,” Wetherbee said.

He found plastic shards, chunks and fibers in the rain that fell in Colorado in 2017. The particles are so small, they can only be seen under a microscope.

The USGS is the largest participant in the National Atmospheric Deposition Program, which has been monitoring precipitation for nearly 40 years. That's how Wetherbee got access to so many high-quality rainwater samples.

"Our collectors have sensors on them. When it starts raining or snowing, it opens up to reveal a bucket. When the precipitation stops, it seals back up,"  Wetherbee said.

The collection buckets are made of clear plastic, that's why Wetherbee said it is so important to record only color plastics, to ensure that there is no cross-contamination.

Wetherbee said that plastics can break down over time due to aging and because of various friction such as weathering. And when you’re dealing with particles that small, they can probably be found just about anywhere.

“There’s more plastic in the environment than meets the eye,” Wetherbee said.

Wetherbee found microplastic contamination in 90 percent of the rainwater samples they collected -- which might not too surprising in urban and industrial areas like Denver, Arvada and Boulder.

“Where it was really surprising is when we started looking at samples from the foothills and Rocky Mountain National Park, and when you see microplastics in a place like that, then it makes you think that these materials could be everywhere,” Wetherbee said.

One collection site was at Loch Vale, nearly 11,000 feet up in Rocky Mountain National Park. Certainly far from the urban centers where plastics prevail, but that plastic footprint might be even larger.

On Wednesday, another research group from Germany announced that they have found these microplastics in snow around the Arctic.

“That’s an incredible discovery," Wetherbee said because now we know that these particles are transported in the atmosphere a very long way.”

What impact these microplastics may have on the environment or on human health is still unknown. Wetherbee said we must first determine how much microplastic we’re dealing with and where exactly it's accumulating.

He believes his data is a step in the right direction.

“Maybe it will give us an awareness for how to make plastics better, how to use them wisely, and how to dispose of them appropriately,” Wetherbee said,