The centerpiece of this project is a massive pipe that's actually a 500-yard-long, 12 foot by 15 foot - a concrete box culvert. 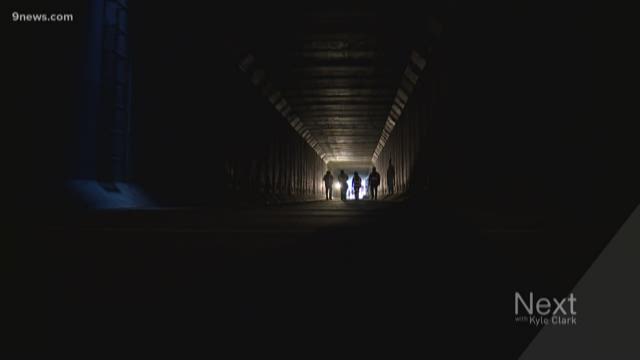 Stormwater in Denver will naturally run downhill and towards the South Platte River.

The problem is that growth and development through the years halted that natural process, leaving some of our historic north and northeast neighborhoods prone to frequent flooding.

Denver Public Works refers to that problem area as the Montclair basin. It is the largest basin in Denver at 9.5 square miles, that does not have a path for stormwater to get to the South Platte River.

So they say that stormwater tends to pool in that area, and some of the worst flooding in the city steams from this spot. The solution, according to Denver Public Works, is to build the largest flood protection project that Denver has ever seen.

The Platte to Park Hill Project, or P2P, is extremely progressive in its use of open channels, water quality features, and inclusion of community and recreational assets.

The centerpiece of this project is a massive pipe that's actually a 500-yard-long, 12 foot by 15 foot - a concrete box culvert.

“Well, it’s a big undertaking. This is probably the biggest project we’ve ever done. We’re kind of recreating what should be a natural gulch, with limited space,” said Bruce Uhernik, storm water planner for Denver Public Works.

This project will protect those historic neighborhoods around the Denver Coliseum, like Elyria, Swansea, Cole, Whittier, Clayton, Skyland, and Five Points.

Denver Public Works said it will not only handle the routine stormwater, that often floods those areas, but also the big 100-year events.

A thunderstorm that covers all 155 square miles of Denver, with just 1 inch of rain, puts down 2.7 billion gallons of water, which is enough to fill about 67 million bathtubs.

The size and power of thunderstorms is often underestimated, and so too is storm runoff.

“I think that stormwater is really not appreciated, and not really thought of until you get those big events, and even a year or two later, people don’t really remember those,” Uhernik said.

In this new project, the water will flow out of that culvert and into the open, where it will run through a new park and into the South Platte River, just along the west end of the Denver Coliseum parking lot.

It's a natural path restored.

“We think about this project is going to help people when that rain storm does come," said Uhernik. "I can’t tell you if it’s next year, or in 10 years, or in 50 years, but it will come, and I’m going to be real proud of this project when I don’t hear a lot of problems."

Denver Public Works says this drain will be ready to take on stormwater by this summer. The new city park will be completed in the spring of 2019.

They plan to build similar drains downstream in the years to come.