A funnel cloud in Weld County, on Sunday, slipped in-between policy and meteorology. 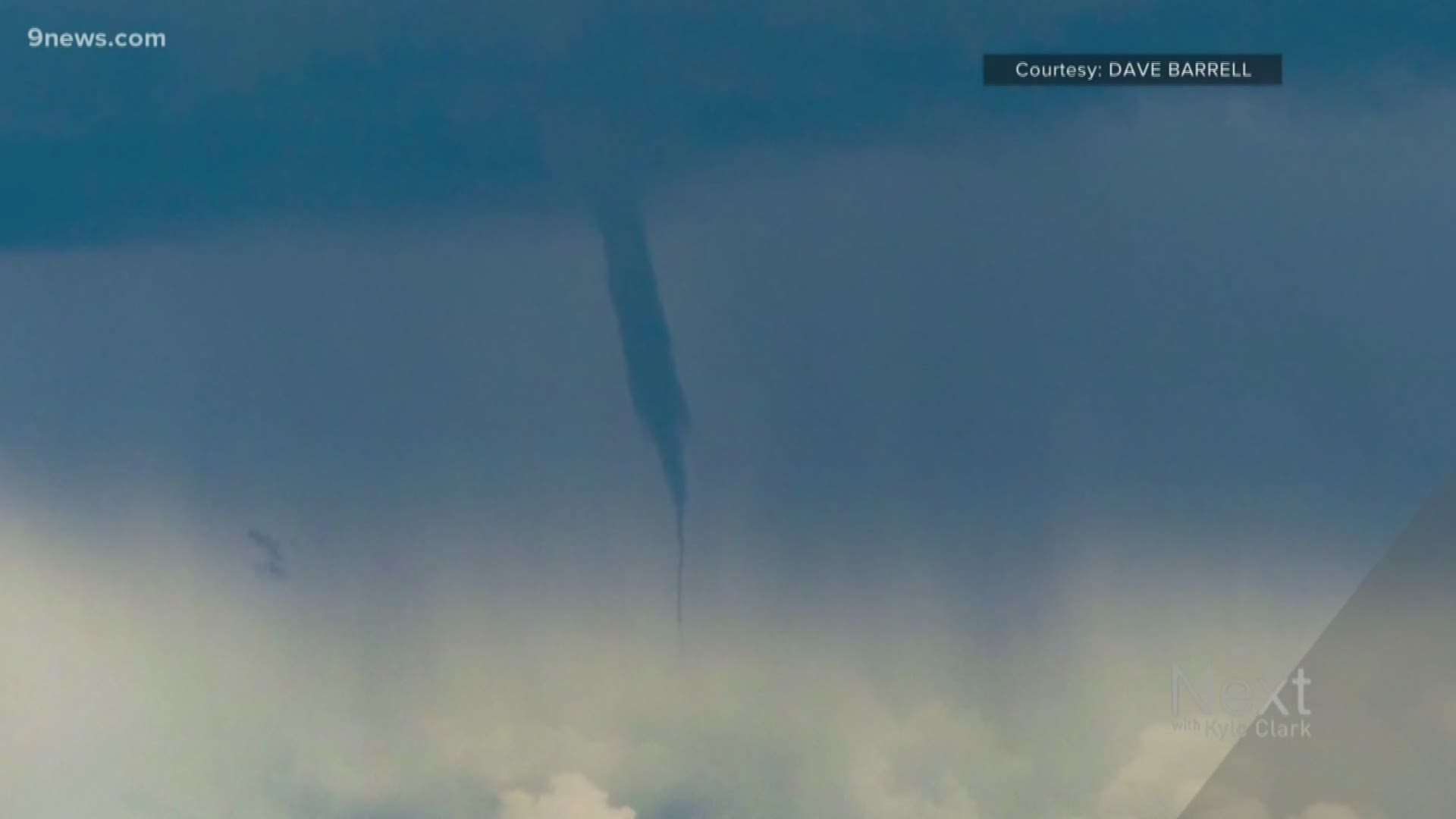 KERSEY, Colorado — A funnel cloud in Weld County, on Sunday, just south of Kersey, triggered the town's tornado sirens, but a tornado warning was not issued by the National Weather Service (NWS). 9NEWS viewers reached out to us by email and social media wondering if that was a mistake, or at least saying that mixed messages were sent.

The answer is that the funnel just slipped in-between policy and meteorology. Policy said to warn the public, while meteorologists said there was no danger.

Kersey Police Department policy states that if a funnel cloud of any kind is spotted by trained law enforcement or firefighters, the tornado sirens should be activated. That is whether there is a NWS warning on the storm or not.

In the case on Sunday morning, a Kersey police officer spotted the funnel, called Weld County Dispatch, who activated the tornado sirens. If for some reason dispatch is unable to activate the sirens, they have the ability to activate them from Kersey Town Hall.

A third condition can also cause the sirens to be activated which is any combination of severe weather conditions associated with a tornado warning, including but not limited to:

The NWS said that most policies run by other municipalities and counties are similar.

So, that was just a case of a town following a guideline that is in place to err on the side of caution or in other words 'be safer than sorry'.

On the other hand, meteorologists with the NWS in Boulder, who are responsible for issuing tornado warnings for Weld County, said the funnel did not meet their criteria for issuing a warning - which would be if a tornado was likely to form.

"We are constantly analysing the atmosphere as it changes throughout the day, to see if tornado development is possible. Those conditions just weren't there on Sunday," said NWS meteorologist Paul Schlatter.

The meteorological setup was favorable for what's called Cold Core, or Cold Air funnels. It started with an unusually cold upper-level storm system that moved across Colorado over the weekend. That brought summer snow to the high country and was responsible for the cold core setup Sunday.

The extreme difference in temperature from the upper atmosphere down to the surface creates wind shear near the surface, and even a very weak thunderstorm, like the ones on Sunday, can pull that spinning air up into the cloud creating cold core funnels.

And while that funnel may have looked scary, it really wasn't dangerous.

“Typically, they don’t touch the ground, especially when we don’t really have the strong winds near the surface turning with height," said Schlatter. "We didn’t have that yesterday so in theory, it was just going to be funnels near cloud base.”

So when reports started streaming in of a funnel in Weld County, the NWS was not surprised, but since they can’t see this type of funnel on radar, they needed reports from eyewitnesses to be sure it wasn’t dangerous. And they got plenty of those complete with pictures and video.

“We were sure, given the spotters footage of the funnel cloud itself, and the fact that the environment doesn’t support tornadoes, that we were pretty sure a tornado wasn’t going to form, so we decided not to issue a tornado warning even though there was a clear-cut funnel cloud out there,” said Schlatter.

So yes, it can be a confusing way of doing things. Especially given the technology that we have at our fingertips these days, but the NWS said they are in favor of every method of warning the public about the weather, even though they feel the warning sirens were not necessary in this instance.

“Those are intended to reach the outdoor people, the people that are caught outdoors when there is some kind of weather coming their way," said Schlatter.

The best advice is to treat the tornado sirens as they are intended, as a warning. Move indoors and seek more information from a safe place. If there is no warning in place from the NWS, then there is no need to fear the funnel. Although it is recommended to stay indoors during convective thunderstorms anyway.

If you there is a tornado warning in place, along with the tornado sirens, then you should take your pre-planned tornado precautions. That should include moving to a storm shelter, a basement, or the most interior part of your house without windows.

Credit: Terri
Funnel over some homes near Kersey, Colorado

Tornado warning sirens were installed in several Weld County communities after a large damaging tornado hit there in 2008.

Here is a list of towns that do have warning sirens:

It is often asked why Windsor and Greeley do not have warning sirens. Weld County Emergency Management said it comes down to the great expense weighed against the effectiveness of other methods now available.

Weld County, Colorado has had more confirmed tornadoes than any other county in the United States since 1950.

Roy Rudisill, the Director of Weld County's Office Emergency Management Office, said it can cost $20 to $25,0000 per siren, and they only cover about a half-mile radius during storm conditions. So it would take a significant amount of sirens to cover a city the size of Greeley. Then there is an additional maintenance cost every year as well.

Rudisill said that citizens can sign up for their Code Red program which is a reverse notification system that will alert the given phone number with weather warnings, and other types of emergencies.

In 2017, the City of Longmont deactivated their outdoor warning system after expensive malfunctions and told their citizens to use the more effective method of getting warnings, which is a combination of mobile phone alerts, NWS website and social media, local media outlets, and NOAA weather radios.