It's December and Denver just turned on its sprinklers

Denver's parks are unseasonably thirsty. So thirsty, the sprinklers in Civic Center Park are back on. 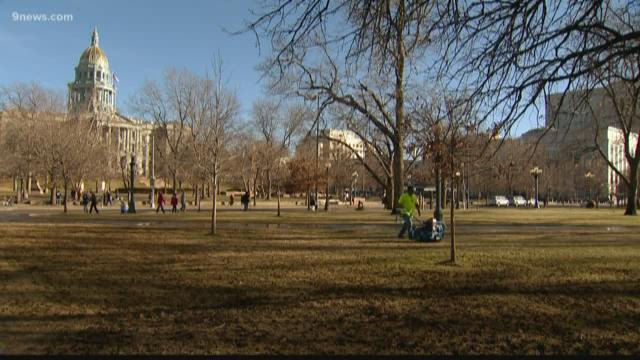 Driving down Speer Boulevard, you can see some of Denver's grasses are still green.

That means it has been so warm the grasses have yet to go dormant as they typically do in the winter months.

Scott Gilmore, the Deputy Executive Director of Parks for the City and County of Denver, told 9NEWS in his six-and-a-half years with the city's department, he hasn't seen a December quite like this one.

It has been more than two months since the city of Denver has seen measurable snowfall or moisture.

"Measurable" is defined as moisture of more than one-tenth of a inch - either snow or rain.

One of Denver's parks in particular has been seriously suffering from a lack of water: Civic Center Park.

"It's a little concerning," Gilmore said by phone Tuesday.

We are nearing the longest dry stretch in Denver history, according to 9NEWS Meteorologist Becky Ditchfield.

Beginning in late November 2002, Denver saw a 69-day stretch of moisture-less weather. (again, that's anything more than one-tenth of an inch, as measured at DIA, officially)

If Denver doesn't see rain or snow by Dec. 19, we will have broken that record.

A lack of moisture impacts all of Denver's 6,000 acres of parks, as well as their tens of thousands of trees.

No place has been more heavily impacted than the 'crown jewel' of Denver parks, according to Gilmore, which is Civic Center Park (the only park in the city/county designated as a National Historic Landmark, by the way).

Because its 200 acres see so much foot and event traffic, many areas have become compacted. In an effort to rescue the matted grasses, parks workers tried to aerate the land.

"If we don’t loosen the soil and create some way for air to get into the soil, it really impacts the tree roots. [Aerating] is a tool for us to try to get some oxygen to the tree roots," Gilmore said.

The ground was so dry, however, crews couldn't even aerate it.

So, with this recent warm weather, Gilmore asked for the sprinklers to be turned back on.

That was last week. Since then, they've been out every day, watering about once a day in order to rescue the dried grasses and satiate thirsty trees.

"We knew, looking at the weather, we’d have these next couple weeks still in the 60s, so I had the guys pop on the pump to irrigate," Gilmore said.

While we have a chance for snow this weekend, Meteorologist Becky Ditchfield says there's still a chance it won't be enough to be 'measurable.'

The compaction problem is a combination of dry weather, the number of people that are always in the park, and certain areas where trees are simply not getting any kind of moisture, GIlmore said.

Parks workers plan to irrigate at Civic Center Park until at least the weekend, or until temperatures get too cold and the sprinkler system risks freezing.

It takes about a day to blow out the irrigation system, according to Gilmore. At first, crews had brought watering trucks to the park, but that quickly became an inefficient way to sate the park.

Gilmore says turning the sprinkler systems on during the day has nothing to do with trying to disperse crowds of transients or loiterers.

"They’re still in the park, we are not trying to keep them out. There are some areas where they gather they have compacted the soil, those are the areas that are most challenged," he said. "We're not chasing anyone out of the park. Our parks are for everyone."

The only rule parks will enforce regarding transients is the curfew in all of Denver's parks, which are closed from 11 p.m. until 5 a.m.

Civic Center Park is the only park in Denver that currently has its irrigation system turned on, although Gilmore said if he had more crews available, he'd love to be watering all of the city's parks, as they all could use the moisture.

Grasses aren't the only fauna that need a little extra love in a dry December like Denver is experiencing, either.

Trees are also craving moisture. Each year, the parks department plants thousands of new trees that must be taken care of year-round.

"You don’t just plant it and leave it alone. We are a semi arid desert climate. When we don’t get water, it really impacts our green areas," Gilmore said. "We’re out watering trees every day."

Each year, the parks department gets a 'bank' of water, a budget, essentially, that they can use throughout the year.

The city has 6,000 acres of parkland, and about 3,000 acres of that are irrigated (equipped with a sprinkler system).

Each park alone can have thousands of sprinkler heads.

With the extra winter watering, Denver Parks and Rec is trying to stave off further damage come spring and summer.

"We always have to adjust and address different situations. This is just another one of those - we just have to make some adjustment to staffing," Gilmore said. "If we don’t address issues like this, we will pay the price later."

Back in 2002-2003, when the Mile High City had a similar dry spell lasting through February, Denver saw a monster 31.8 inches of snow in March - the second largest snowfall in the city's history.

That's not to say it will happen the same way in 2017, but it is interesting to consider!