More than 400 tornadoes hit Colorado in the past decade

One tornado defied Colorado's tornado climatology with it's strength and location.

COLORADO, USA — More than 400 tornadoes touched down in Colorado over the past decade, according to data from the Storm Prediction Center. 83 percent of those were east of Interstate 25, and all but one were rated EF-2 or weaker.

That is very typical of Colorado's tornado climatology throughout the history of our record keeping, but as we look back at some of the more memorable tornado events over the last decade, there is one tornado that completely defied those climate expectations.

That rouge and unusual tornado hit on June 4, 2015. It was the strongest and only EF-3 tornado in Colorado this decade, and it also hit west of Interstate 25.

It touched down in Boulder County north of Longmont, and tracked northwest into Larimer County near Berthoud.

This twister was on the ground for 38 minutes, damaging several homes along its 6-mile path, but no injuries were reported as a direct result of the tornado.

Colorado tornado photo wins National Geographic's 2015 Photo Contest
A Simla, Colorado tornado captured in all of its wicked glory has beat out thousands of submissions to win National Geographic's 2015 Photo Contest. The photo, captured by photographer James Smart of Australia, is entitled, "DIRT." It earned the Grand Prize and was also the contest's Nature Category winner.

On that same day, a massive supercell thunderstorm on the Palmer Divide dropped 6 tornadoes near Simla, Colorado. James Steward snapped a shot of one of them that won the National Geographic 2015 photo contest.

Some minor damage was reported there, but again, no injuries.

Colorado tornadoes are known by storm-chasers for their photogenic beauty, and in terms of beauty, it's hard to beat the Wray tornado that touched down on May 7, 2016. Colorado storm-chaser Dave Crowl got a shot of the tornado looking across the town of Wray from the south.

That shot made the cover of the May 2017 Scholastic Magazine that taught school kids about the science of tornadoes. 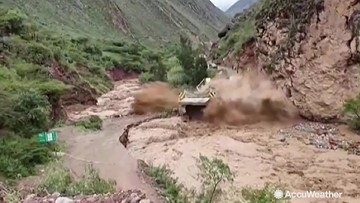 Credit: Heidi Marintzer
It was Prom Night in Wray, Colorado on May 7, 2016, when an EF-2 tornado set down just outside of town.

This dusty twister received an EF-2 rating with 130 mph winds. This image of the Wray Tornado was captured by the late storm chaser and Colorado native Corbin Jaeger, who was killed in a car accident almost one year after taking this photo.

I will never forget talking to him in February of 2017 at ChaserCon in Denver. He said that Mother Nature was an artist and that some of his happiest moments were witnessing some of her creations unfold before his eyes. Among the memorable weather events of this past decade, there is also the memory of a great man lost too early. He will always be missed.

Another EF-2 tornado hit that same day near Wiggins. No injuries were reported with either of these tornadoes.

This is a day known to some storm-chasers as Colorado Tornado Fest. 15 tornadoes swept across the state that day. 14 were rated EF-0 and one was an EF-1.

No injuries were reported but one family in Kit Carson County witnessed twin dirt sucking twisters roll right past them at close range while they hid in a nearby ditch.

This imposing tornado went right across the runway at Denver International Airport in June 2013. It just missed cars, planes, and travelers, but it did hit the weather station, registering a 97 mile per hour wind gust.

That still stands as the record fastest wind ever measured in Denver.

Most of Colorado’s tornadoes happen between April and August, which means the first tornado season of the 2020s is only four months away.