Due to the winds, there were lots of things (like trampolines and Porta-Potties) in places they should not be. 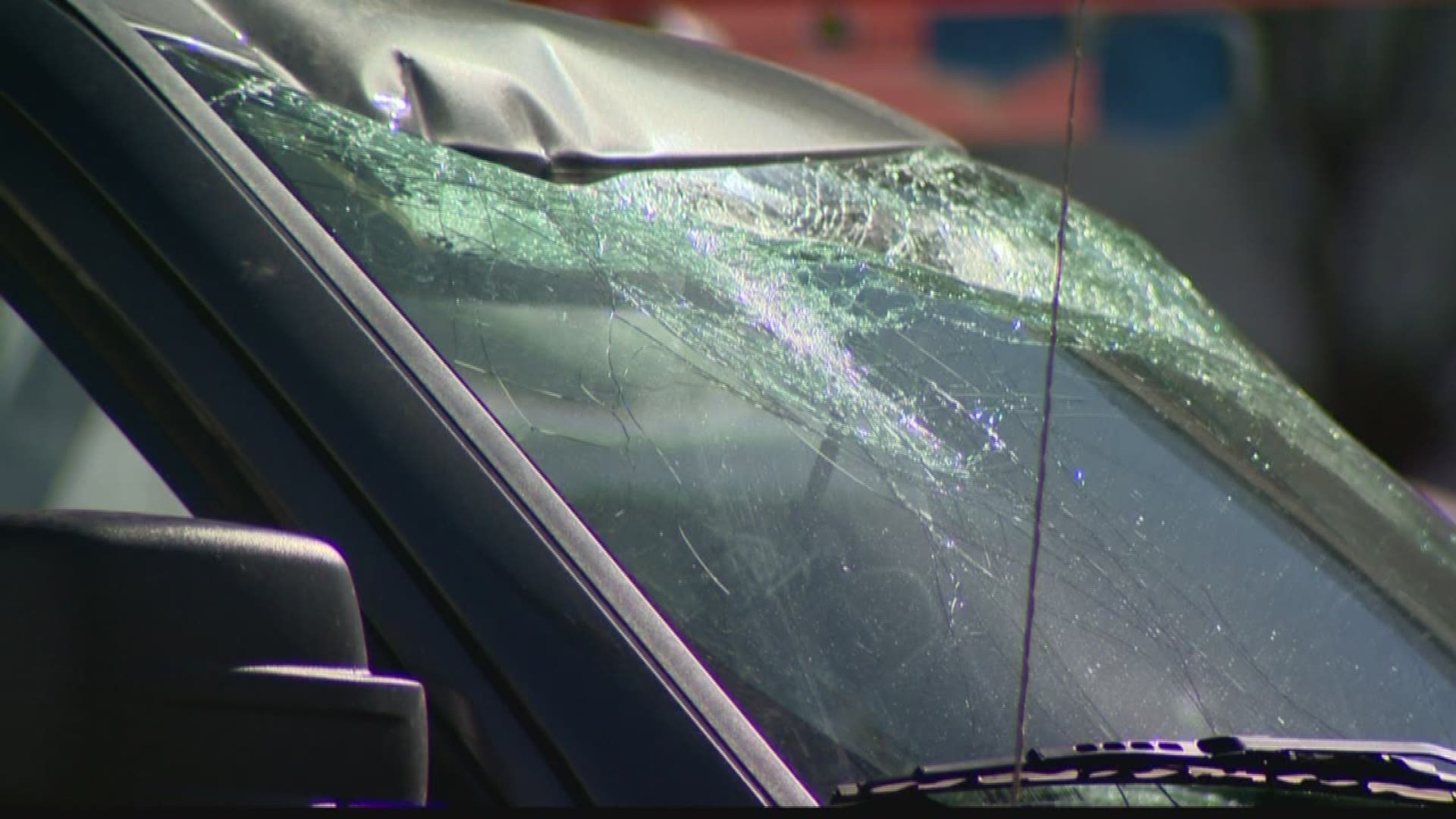 KUSA — The sight of shattered windshields, streets littered with tree branches and trampolines/Porta-Potties in places they definitely should not be were common across the Front Range Tuesday afternoon as dangerous wind gusts blew through Colorado.

The storm knocked out power for nearly 50,000 Xcel customers as crews worked to repair downed and damaged power lines.

Peak wind gusts were recorded at 89 miles per hour in Louisville – and more than 50 mph in Denver, where trees fell into numerous major streets and onto houses (for context, hurricane-force winds are defined as more than 74 miles per hour).

STORY | Here’s how windy it was where you are

Downtown, fire crews battled a smoky blaze on the shrubs and plants on the roof of a one-story building. A few blocks away, part of the roof of the Denver Center for the Performing Arts actually fell onto a truck parked on the street dozens of feet below. 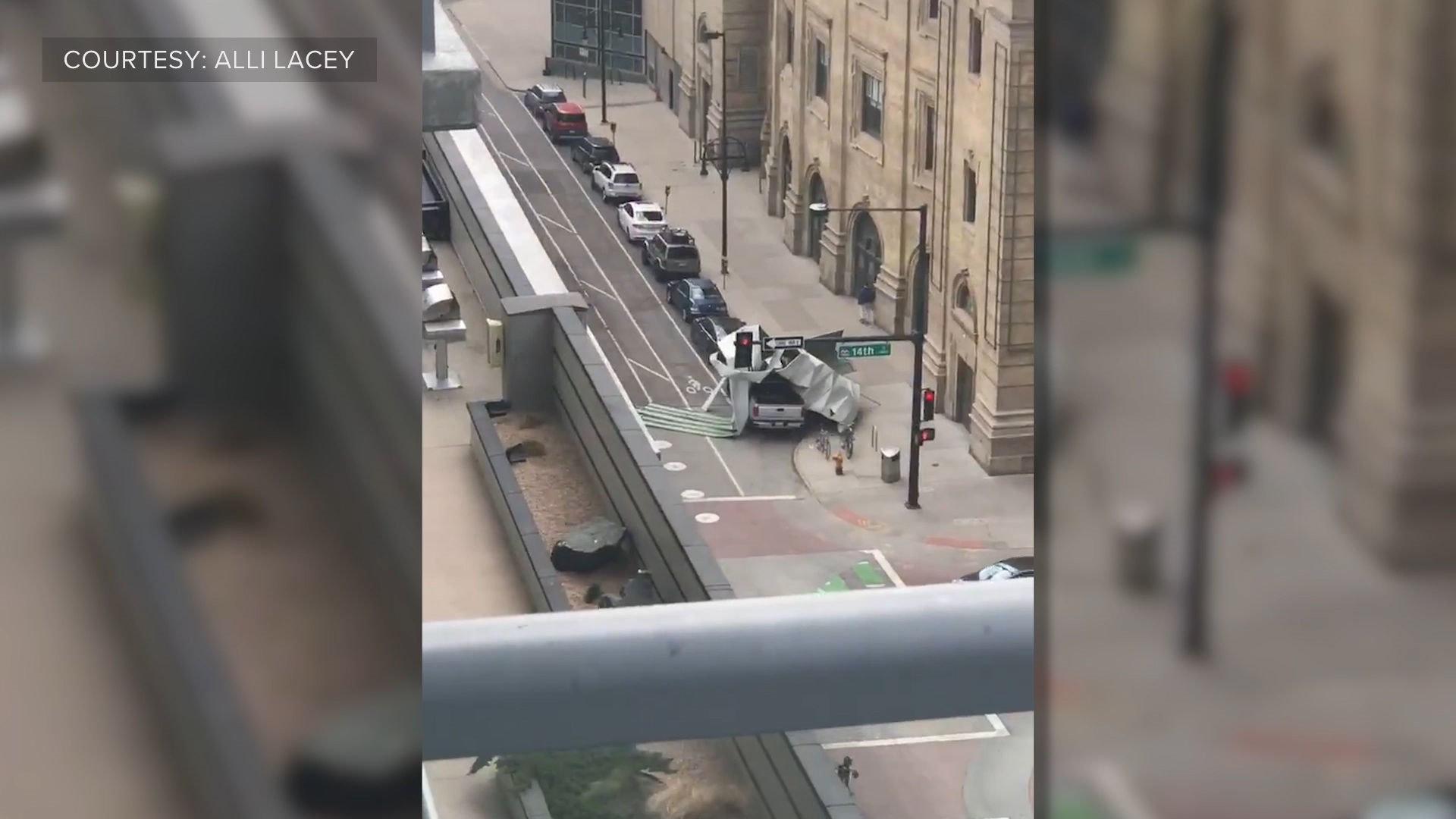 Perhaps miraculously, at this point, there have been no reports of major injuries due to the wind.

Here’s a look at what happened because of Tuesday’s wind storm – and the impact it could have for the rest of the week. 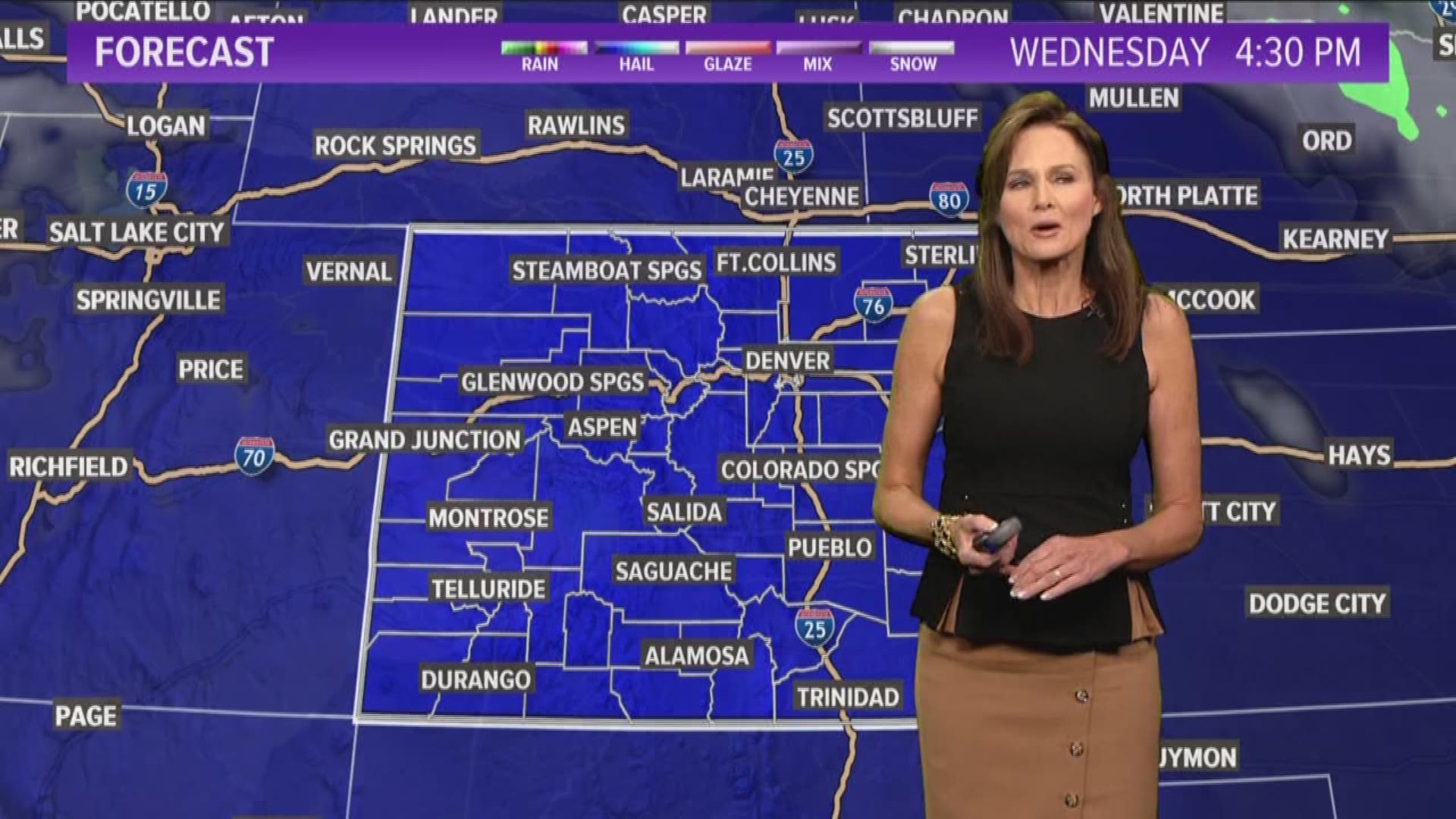 Xcel said late Tuesday night that 116,983 customers experienced some sort of outage due to the wind. Power has been restored for many of them, but it's unlikely to be back for everyone by Wednesday.

Due to the power outage, two Mapleton Public Schools will close their doors on Wednesday.

Class is canceled at the Global Campus and Big Picture College and Career Academy, the district announced. The Mapleton Schools Administration building will also be closed.

In the Boulder Valley School District Escuela Bilingüe Pioneer in Lafayette is also closed due to power outage in the area.

The university tweeted photos of a large tree that fell on Lowell Boulevard directly adjacent to campus:

Due to today’s high winds, a tree fell on Lowell at W 49th Ave, directly adjacent to campus. Many thanks to everyone who came out to help direct traffic and to get the tree moved out of the street. #thisisregis #cowx @9NEWS @denverpost pic.twitter.com/EQbwAG0nd2 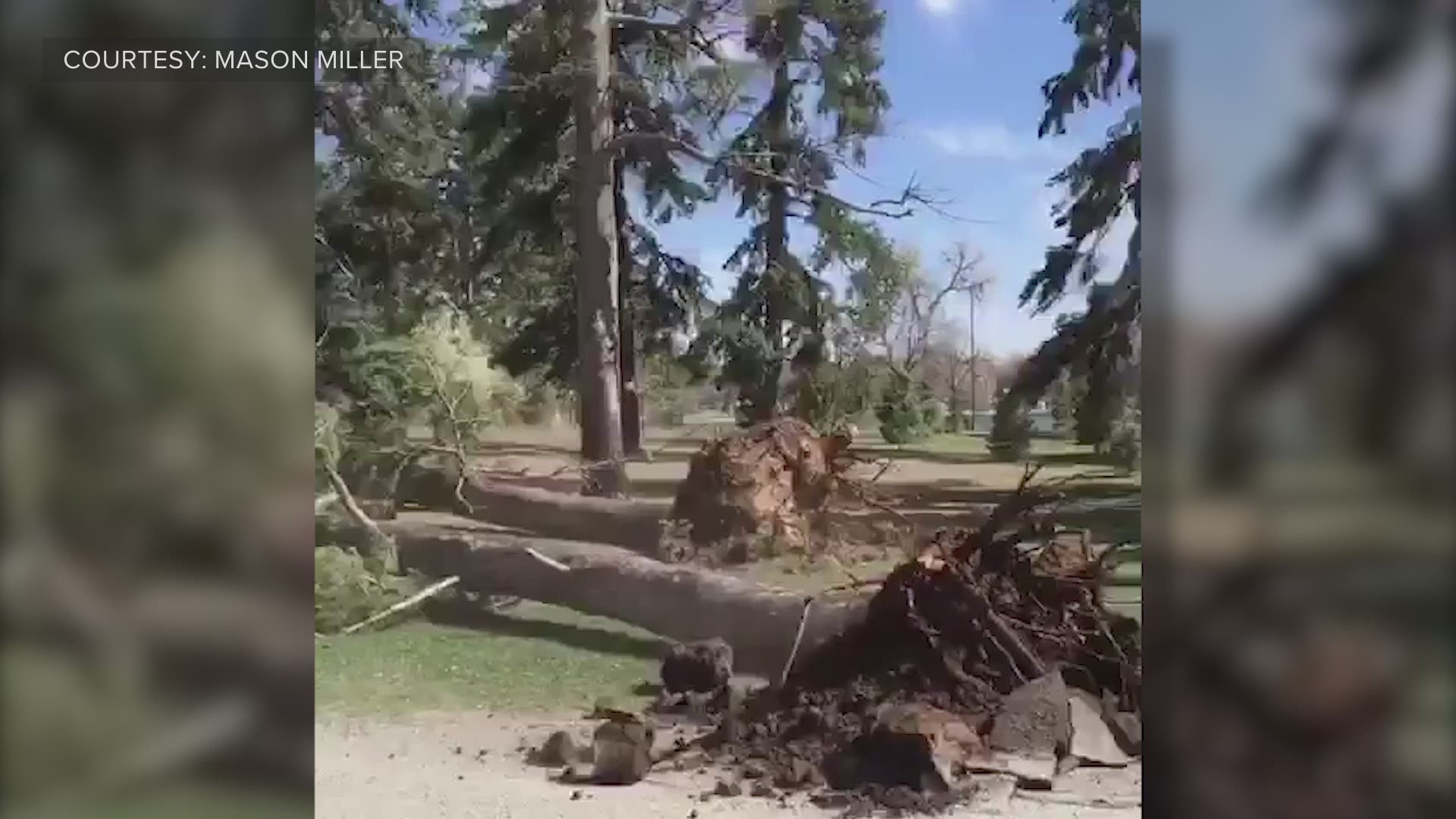 Numerous 9NEWS viewers spotted trees that were simply knocked over by the sheer force of the wind. Some of those trees were in the Washington Park neighborhood, but others were as far north as Fort Collins. 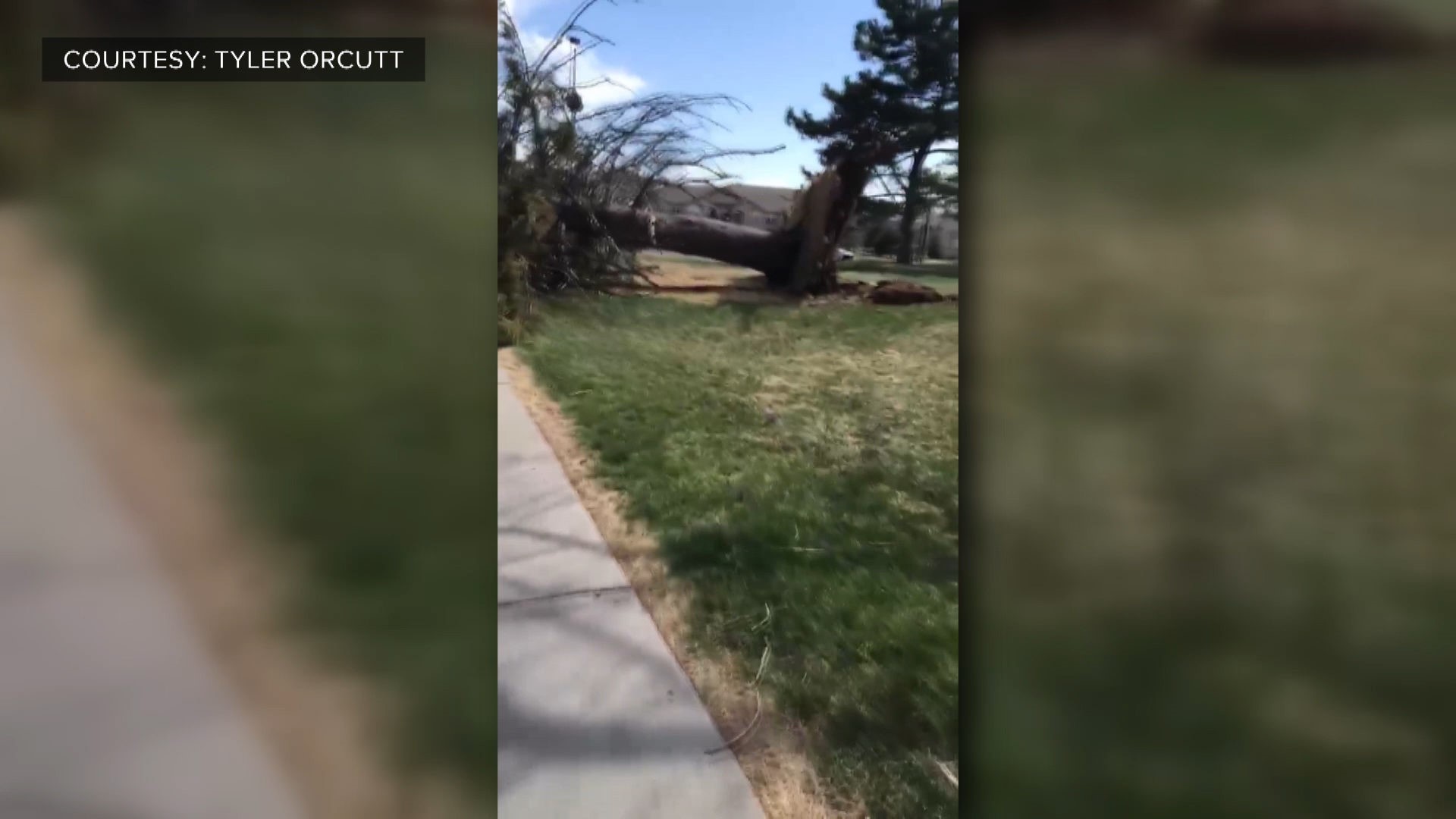 The city of Denver says property owners are responsible for picking up downed tree branches, and that Solid Waste Management will collect a limited number of those. They can also be brought to the Cherry Creek Recycling drop-off center. More information is available here: www.denvergov.org/recycling

If you encounter downed power lines/cables today:
Stay clear and report them immediately to Xcel Energy at 1-800-895-1999.

If a power line is in contact with any object, stay away and call 911 immediately.

Numerous trees also were blown onto homes in the Denver Metro Area. One large tree was blown onto a house near East 8th Avenue and Chambers Road in Aurora – luckily, no one was injured.

Be safe Aurora! Engine 4 responded to 8th/Chambers where a large tree was blown into the house. No injuries to community members. #AuroraFire pic.twitter.com/WYaBMQKyw1

In Edgewater, a tree blew onto a home in the area of West 24th Avenue and Harlan Street:

Our crews in the 2400 block of Harlan. Wind uproots tree, pushing it onto a house. pic.twitter.com/1isdIXhYHZ

And not even firefighters themselves were immune the storm. West Metro Fire’s station on Huron sustained roofing damage – and some materials blew off onto employees’ cars.

North Metro wasn’t immune to today’s winds. Our fire station on Huron sustained roofing damage. Unfortunately, materials that blew off damaged employees’ vehicles and other vehicles at a nearby business. Thankfully, the station is still habitable. #COwx pic.twitter.com/JwNBgmbJuK 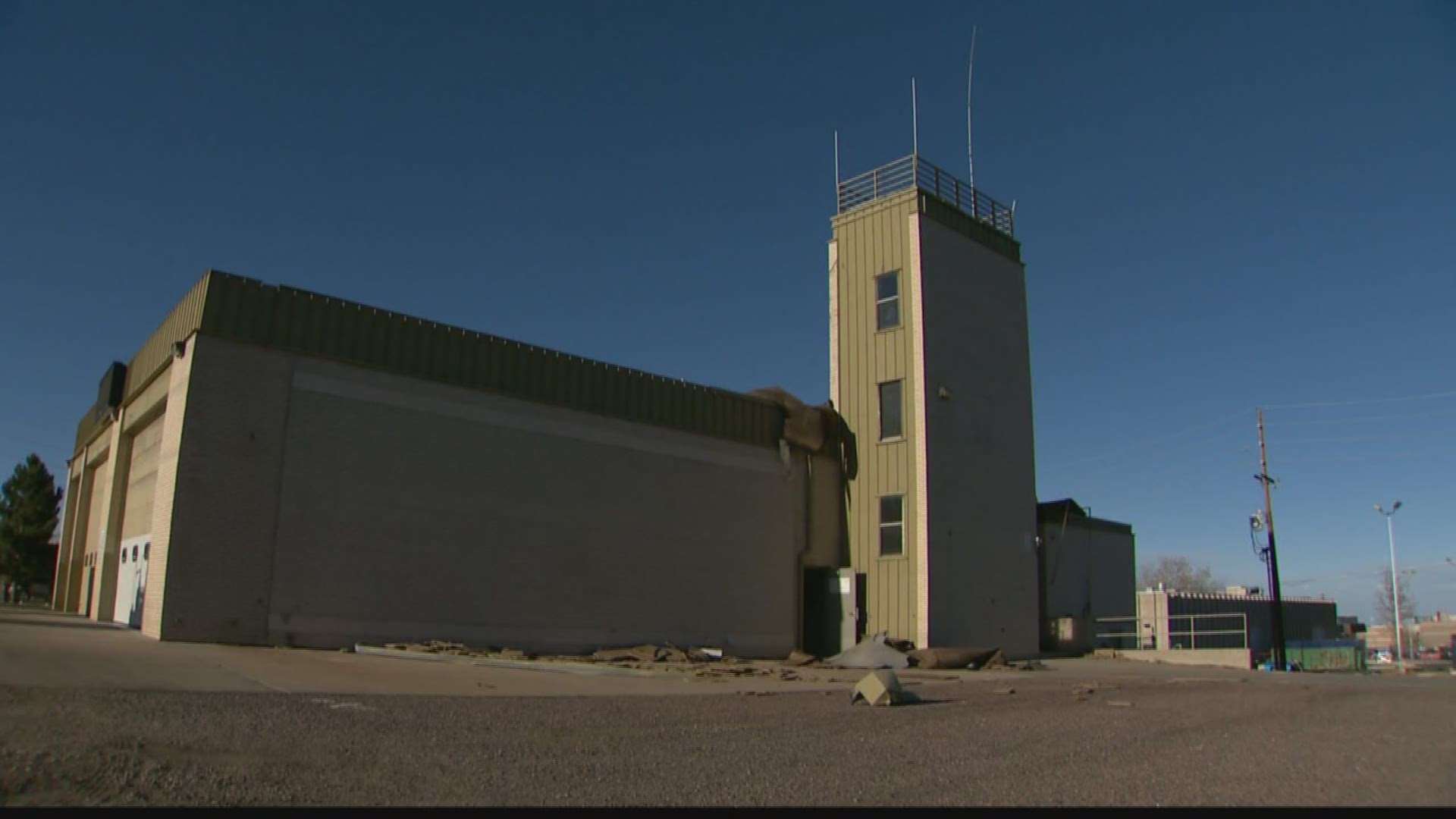 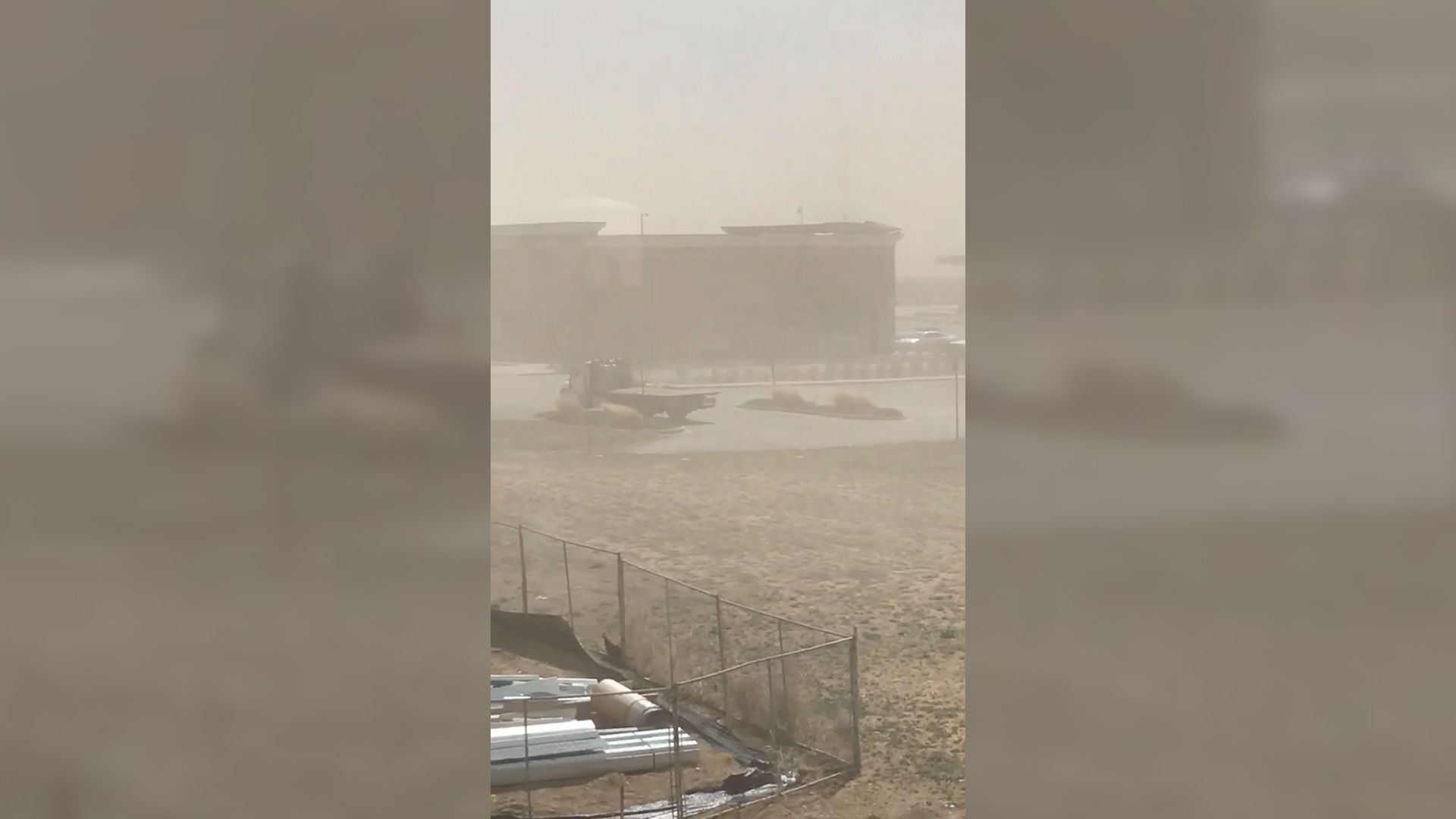 Numerous major Colorado highways – including stretches of Interstate 25 and I-76 – were closed due to the winds, but many of these roads have since reopened as the gusts died down.

You can find the latest travel alerts from the Colorado Department of Transportation here: https://bit.ly/2hs0gYW

Flights were grounded for a short period of time at Denver International Airport Thursday afternoon, but have since more or less returned to normal.

Here's a look at what the dust storms looked like from one plane that was diverted: 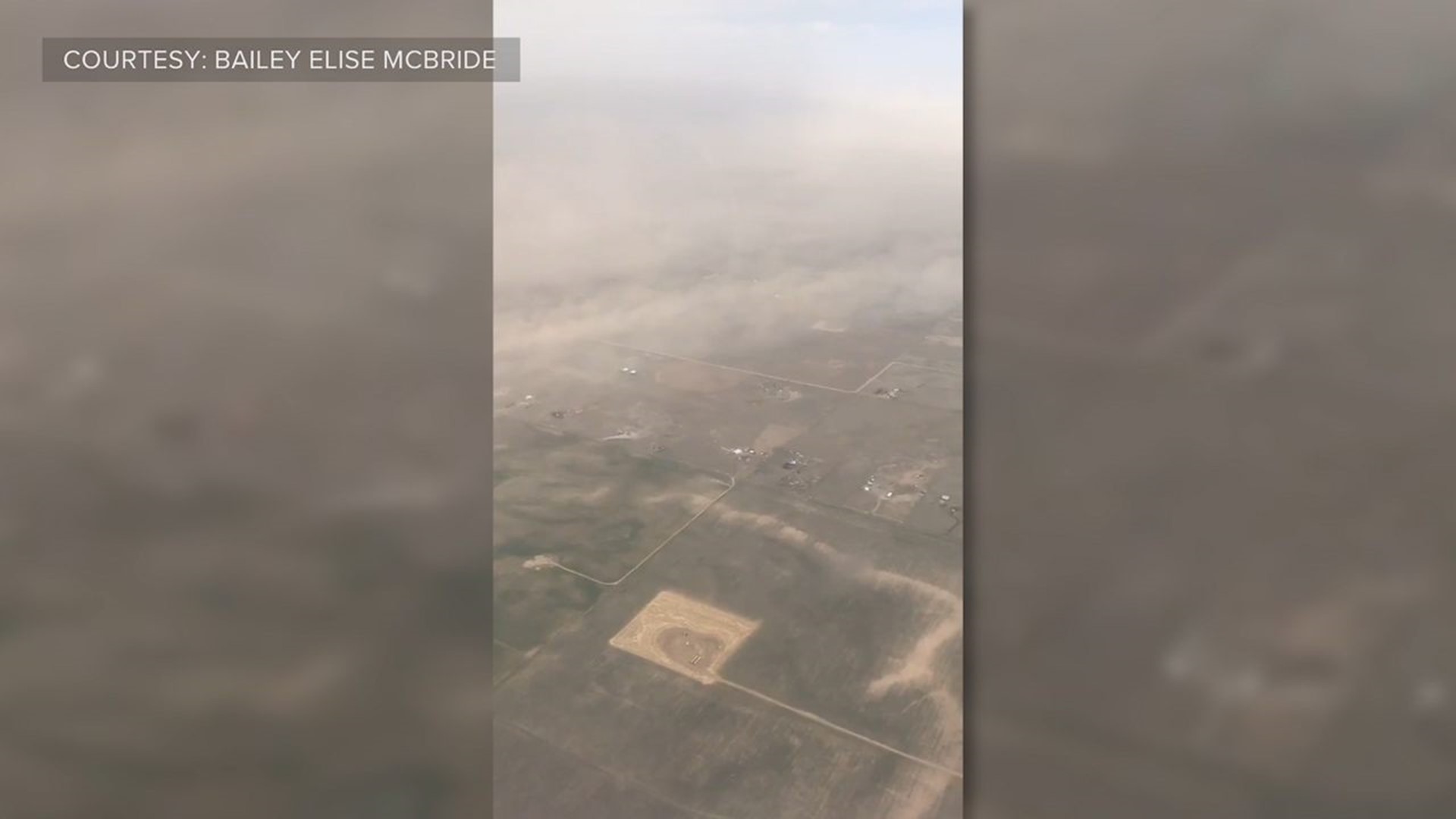 1 / 14
Tree falls on this house in Thornton. Courtesy: Victor Nevarez