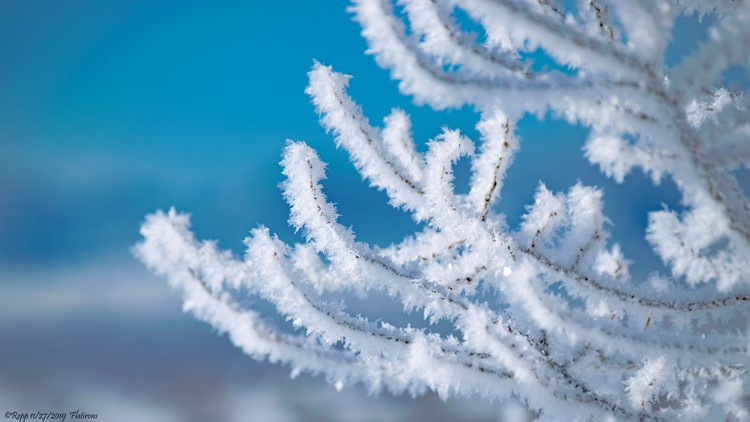 Snow Blog: Next winter storm moves in on Sunday

COLORADO, USA — This blog follows winter storm development in computer modeling. It will be updated once a day until Monday's storm is over.

This snowstorm will continue overnight and into the day tomorrow. Should lighten up after sunrise, but driving conditions on the mountain passes could still be a little rough until the afternoon.

Some light and widely scattered snow flurries will be possible on Monday morning in northeastern Colorado, but not heavy enough to have any impact on anyone. The Euro is now the only model showing any snow accumulation at all.

Chance of snow accumulation in Denver: 2%

There are actually going to be two storms back-to-back this weekend, but since Friday's storm is a very separate entity, I'll split them up on this blog. They may end up being so close together, that they may not feel very separate on the ground.

This first storm will only bring light snow to the mountains starting very early Friday morning, and lasting into the night. 1-4 inches will be possible on the high mountain passes.

Mountain snow will likely start up with this disturbance before the previous one ends, and by Saturday night, that snow should be able to move down onto the Front Range.

Snow impacts to the Denver metro continue to increase in probability for Sunday. One week from today. Still 7 days out, but make a mental note for some possible winter weather impacts.

Models have been showing snow all day in Denver on Sunday. With the last 5 models runs, the GFS has indicated at least 1-4" of accumulation. The last run of the GFS and Euro showed a little more on both.

Potential for some heavy snow in the foothills and for much of the eastern plains as well.

Even though the models have been consistently showing some snow impacts on the Front Range here, the timing and intensity of that storm has not yet been consistent.

Couple of weaker storms shown in this window. GFS has shown a snow signal on the Front Range on Friday Dec 20 a couple time lately, but this is a very weak signal.

Nothing interesting showing in the modeling up to the Dec 24 now.

A storm system is just starting to move into Colorado, and radar returns should start to fill in just after midnight on the Western Slope.

The Colorado Rockies from north to south should get some snow. Winter Weather Advisories are in place for the western half of Colorado until 9am on Monday morning. Those mountain passes in the blue shaded areas will be difficult to travel on at times Sunday.

Those advisories now extend east all the way to Georgetown.

Nothing very interesting on the plains, although we will notice the winter storm rolling though the area. Some area's on the Front Range could already have a layer of low clouds by morning which means isolated freezing drizzle and fog will be possible.

Then in the afternoon a wave rain and mixed winter precip could move across the area. Mostly to the north and northeast of Denver.

Best chance for snow will come on Monday morning with some very scattered and mostly light showers.

The NAM and the Euro both show just enough snow to get some accumulation in spots. Less than a half inch mostly. The GFS does show some light snow and mixed showers in a few spots, but not enough for it to show up on the ground. Temps should be in the mid to low 20's, so it is possible for it to stick in the places that get it.

The NAM shows accumulation in about 10 to 20 percent of the Denver metro area. The Euro shows a little more. So, safe to say there will be very little impact from snow with this storm.

Chance of snow accumulation in Denver: 10%

This storm now appears to split Colorado and have very little impact. Could still get a dusting on a few mountain peaks.

The storm in this window has not been showing too much consistency, but it is still getting a little more likely that a the Denver metro will get some snow in this window. Models are showing a pretty low impact though so far, with only 1-3 inches of accumulation.

Tomorrows runs will be inside of the 7-Day forecast, so we'll see if it survives.

The 25k GFS goes all the way to December 23 now. It has been showing some activity in this period but nothing really worth talking about yet. The longer term Euro has been showing a decent shot at a white Christmas. Around the 30 percent range.

A good mountain storm is still showing up in the models, although it has been trending down in moisture a bit. Also still looks like just a low impact to the Front Range.

latest GFS solution still showing the bullseye for this storm in the Pitkin-Gunnison zone. It has come down a little though.
KUSA

Sunday will be the tougher travel day in the mountains. The storm should wrap up by about 5 p.m. Monday.

The European Model has come down a bit on the moisture with this Sunday's storm.
KUSA

The NAM and the GFS show some rain and freezing drizzle on the plains. Very scattered, so not many areas look to be impacted. Places to the north and east of Denver have a higher chance.

The Euro has snow mixed in on the Interstate 25 corridor, foothills, and Palmer Divide starting early Monday morning before dark, and lasting until about noon. Less than an inch of snow accumulation is indicated.

Should be another low impact storm for us down here. I always hold out hope when the Euro is showing snow, but a quick mix seems pretty worthless.

Models are keeping with a weak southern storm track on Friday the 13th, with a quick northern tracking storm following right behind. Mostly 1-4 inches has been indicated.

Still a signal in this window of a strong southern storm. Positioning and duration has changed with every run, but it's still there nonetheless. It has been showing some consistent impacts to the Front Range within this timeframe, just on different days. This signal is gaining favor but still considered weak. If it is still there inside of 7 days, then it becomes more meaningful.

Showing some signs of a couple more weaker southern storm tracks in this window.

The computer models have been very consistent lately in showing a pretty big snowstorm for the mountains on Sunday and Monday. This storm should also have some minor impact on the Front Range.

Early snow solution from the GFS for Sunday and Monday.
KUSA

The storm should get going on the Western Slope very early Sunday morning where most of the snow will likely be focused. The bullseye areas could end up being the Pitkin, Gunnison zone, or even the Park Range or Flattops to the north. Early indications have been for 6-12" possibilities.

The Vail Pass to Loveland Pass zone should pick up some good snow, too. Four to 8" have been indicted in the modeling so far.

Early snow solution from the European Model for Sunday and Monday.
KUSA

Some of the foothills and metro corridor could have a chance at some snow accumulation on Monday morning. Models have been showing less than 2" likely in the last three days of solutions, but it likely won't be a big deal outside of the mountains.

The GFS shows the first of several opportunities at a southern storm track on Friday the 13th.  We've seen how good these storm tracks can be if they hit the sweet spot. That's what happened with that recent 1-3 foot dump we recently had.

This first storm looks like it might be pretty weak, and way too far south to have much of an impact, but there is a lot of room for error with storms that dive deep. A trending split jet stream has shown many southern lows meeting up with Canadian troughs. That appears to be the case here as well.

At this time, models are only showing light mountain snow with this storm.

There appears to be more potential with this second storm. The GFS has been showing a strong trough coming close to the Four-Corners region, on 1 out of every 4 runs.

This is not a strong signal, but at least it's something interesting to watch.

And yet another potential Four-Corners low being shown in this window. We're getting into holiday travel season, so the interest is peaking, but keep in mind these are all very weak signals for now.