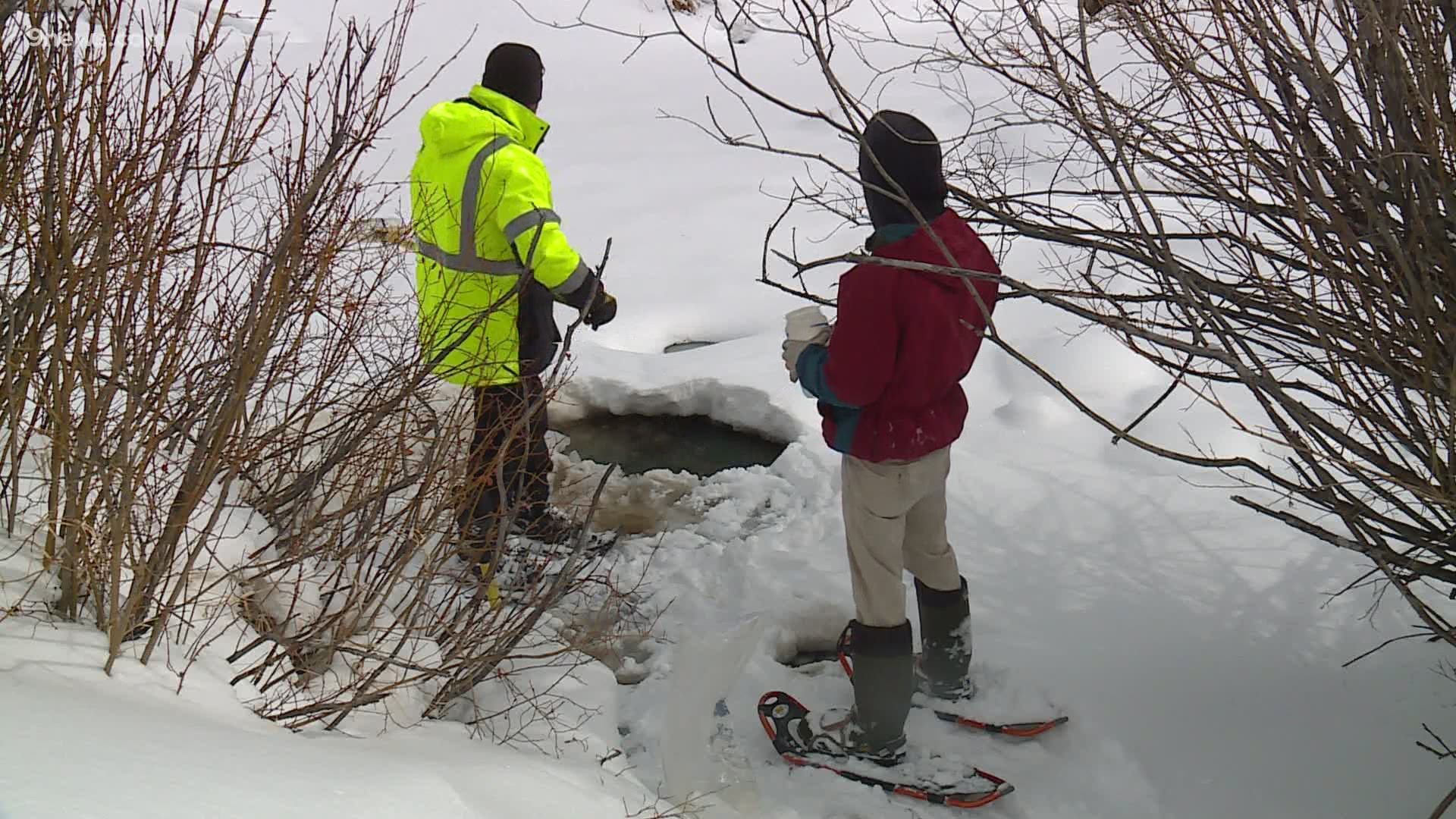 PARSHALL, Colo. — One of the many large wildfires that burned in Colorado last summer was near the Williams Fork reservoir. The fire scorched the hills standing above the river but Denver Water said they were lucky it didn't come too close to the reservoir.

The water utility said they still do expect some impacts to water quality in the area as a result of the Williams Fork fire. That will likely come during the spring runoff, so they dispatched water sampling crews to the headwaters to sample and test the water.

"We actually have someone doing water sampling practically every day of the year, somewhere in our 4,000-square-acre collection area," said Todd Hartman, with Denver Water. "But this year we will be paying very close attention to this burn scar."

Denver Water crews will be able to sample water a little more efficiently this season, too, with their new Polaris Ranger snow cat. They used it to access an area near Sugarloaf Campground on a day late in February. 9NEWS accompanied that crew.

After a short snowshoe to the river, the sampling crews went to work breaking a hole in the thin ice that covered that part of the Williams Fork River.

The burn scar was visible on most of the hills surrounding the area, buried in snow. Denver Water said there are still many impacts that will come long after the last spark was extinguished in November.

“These fires are a real challenge for us because of the damage they do to the natural filtration system that the forest provides,” said Hartman.

He said the soil is the water's first filter, long before it reaches a treatment plant. When the soil is burned, it can’t do that job.

The sampling crew was testing the water for things like sediments, metals, acidity, and salinity. They’re looking for early impacts from the burn scar.

“That does signal to us some clues about the state of the soils and the severity of the burn," said Hartman. "So, we can learn from water chemistry about the way the soil was damaged by the fire.”

Hartman said that any change to the pristine water that the Williams Fork reservoir is used to receiving from the Colorado mountains, can offset the whole ecosystem that is dependent on these waters.

A makeshift lab on the tailgate of their snow terrain vehicle provided the Denver Water crew with some quick answers.

Those results are just preliminary. The full panel of results will come in a few days, but this is good news early on.

Denver Water said they expect to see this water change as the snow melts. How fast and how much the water changes are important, and that will be gauged from this first measurement.

“We see this as a first step in gathering this information about the impact of the fire,” said Hartman.

It is expected that the East Troublesome and Cameron Peak burn scars will have more impact to water quality from Grand Lake all the way down the whole Cache la Poudre river system, but those are not in the Denver Water collection area.