Why it gets so cold in South Park

The topography and the micro-climates of South Park create a wide range of winter temperatures. 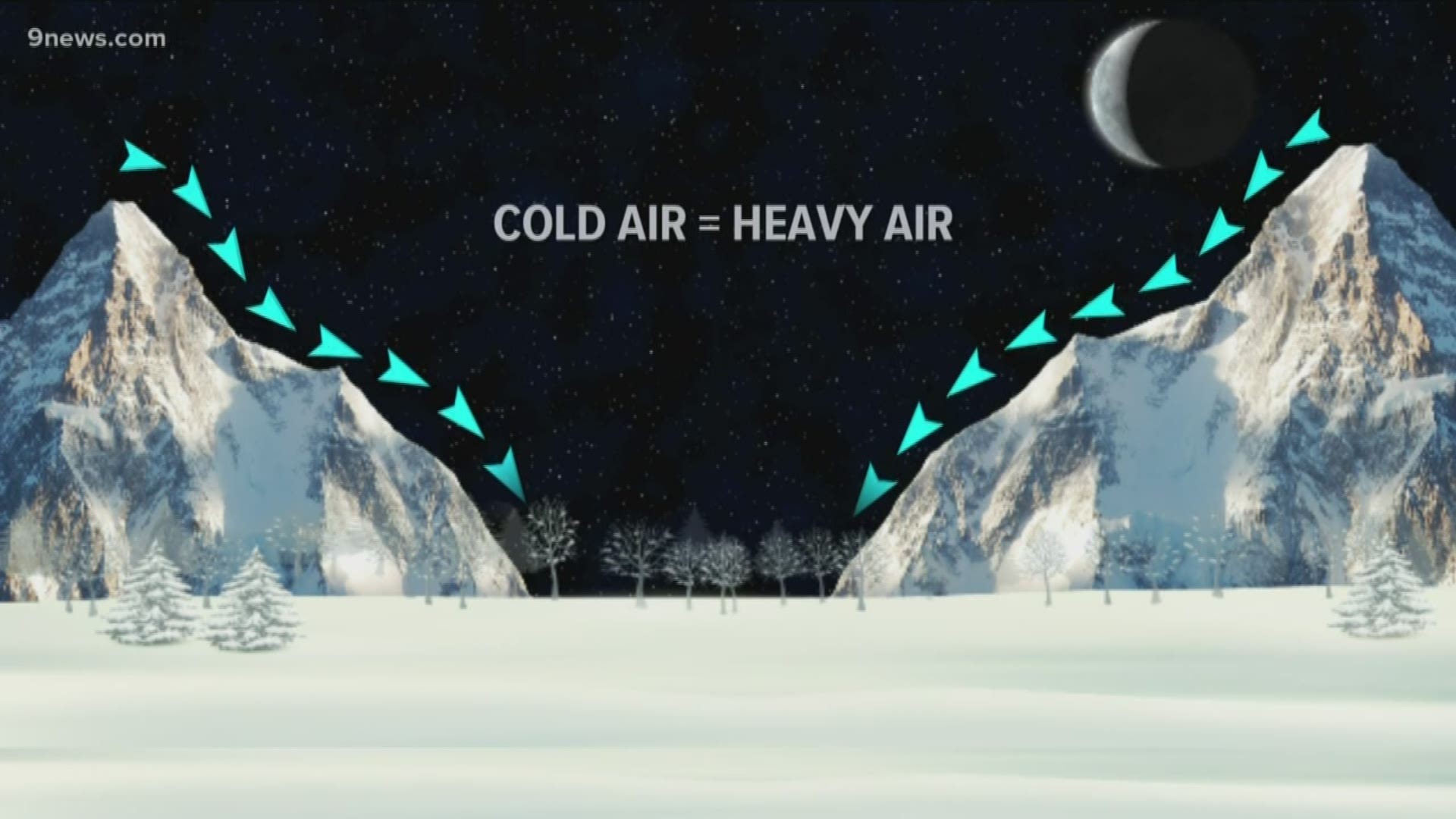 The reservoir is in Park County, about 70 miles southwest of downtown Denver.

It's in a high elevated basin called South Park, which saw a wide range of low temperatures on Monday and Tuesday.

How did it get that cold in the first place?

South Park's topography is to blame in several different ways. It is essentially a very wide valley surrounded by mountains on all sides. The elevation in that basin ranges from about 8,500 feet to 10,000 feet.

The coldest air slides down the slopes of the surrounding mountain ranges. The colder the air, the heavier it is.

That cold air settles down into South Park.

Credit: KUSA
Cold air is the heaviest air, and it drains down the mountains into South Park

Cloud cover traps heat near the surface, but when skies are clear at night, it allows any heat to rise into space dropping the temperatures even further.

South Park is really famous for this, and it is the real key to the insanely low temperatures there.

With the cold air draining to the lowest part of South Park and heat escaping into space, Inversions can be very steep. When the warmer air is sitting up above the cold air, that is called an inversion.

There was a -9 degree temperature reported in the town of Fairplay on Tuesday morning.  That was a 39-degree difference from Antero Reservoir about 20 miles away.

Fairplay is 1000 feet higher than Antero Reservoir, so the air was much warmer up there.

Credit: KUSA
Fairplay is 1000 feet higher than Antero Reservoir. That location was in much warmer air due to a steep inversion.

One of the troubles with comparing temperatures in South Park, is the source of the measurements. There is not a weather station in Fairplay or Hartsel, so we have to rely on citizens to report temperatures in those locations.

Citizen weather stations are notoriously incorrect and are usually reported way too warm. The reason for this is that sunlight can never hit any part of the thermometer, and the thermometer can not be placed next to a building that can radiate extra heat.

Home weather stations are usually placed in spots convenient for the user.

I doubt that -9 was actually the low temperature in Fairplay on Tuesday. It was probably closer to -15, which is still a huge difference from the -48 at Antero.

Credit: Denver Water
Denver Water employee holding a digital readout from the weather station at Antero Reservoir Tuesday. The record low there is -54 degrees on Jan. 10, 1962.

Denver Water has a trustworthy weather station at both Antero and Eleven Mile Reservoirs, and the Colorado Department of Transportation (CDOT) has a station near Jefferson.

There was a low temperature of -29 degrees at nearby Eleven Mile Reservoir, which is close to the same elevation as Antero. The reason for this difference is that there are slight differences in the surrounding terrain creating something called micro-climates.

The key to having a very cold pocket of -48 degree air, is for there to be no wind. Just the slightest breeze can mix in some warmer air

Antero Reservoir is surrounded by completely flat plains, which lends itself better to having the air completely still.

Eleven Mile Reservoir is right up against the hills on the east side of South Park, where little air currents can spread the cold air around and mix in some slightly warmer temps.

That’s how it got up to a toasty -29 degrees there while nearby Antero stayed at -48 degrees.