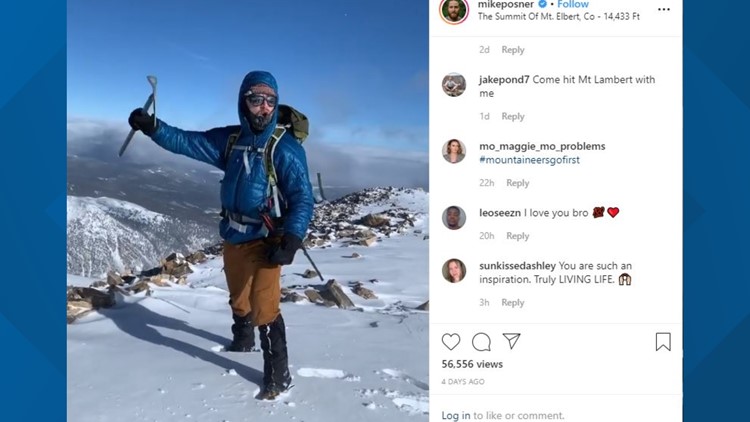 The “I Took a Pill in Ibiza” singer posted about his latest adventure in the Centennial State through a series of videos on his Twitter and Instagram pages.

The first post, dated Jan. 3, showed Posner as he prepared for the snowy trek up Mount Elbert.

“Tomorrow we will attempt to summit, and return all the way to the car,” Posner wrote. “If I make it to the summit, this will be the highest I’ve ever climbed. Keep me in your prayers.”

He posted an update the next day to show his progress up the mountain — and to lament the ever-demoralizing false summit.

Several days, plenty of wind and a Winston Churchill quote later, Posner posted that he had made it to the top of Mount Elbert.

"Finally made it to the summit of Mt Elbert, the highest mountain in Colorado. 14,440 feet," he wrote. "This was a BATTLE. My daily training is starting to pay off. This is just the beginning. Seeing this video makes me feel pride and excitement for what I’m capable of as I continue to work."

In August, Posner was bit by a baby rattlesnake while hiking in Colorado's Eastern Plains as part of a journey to walk across the country. The 31-year-old had to be airlifted to the hospital and received the antivenom in time.

RELATED: Mike Posner is in a Colorado hospital after he was bitten by a baby rattlesnake

RELATED: EXCLUSIVE: Mike Posner Makes a 'Hilariously Ironic' Comeback With 'I Took a Pill in Ibiza'