Man fights off mountain lion that was attacking his dog

Dog owner Gene Whannel hit the mountain lion in the face with an old survey stick and it released its grip on his dog's head. 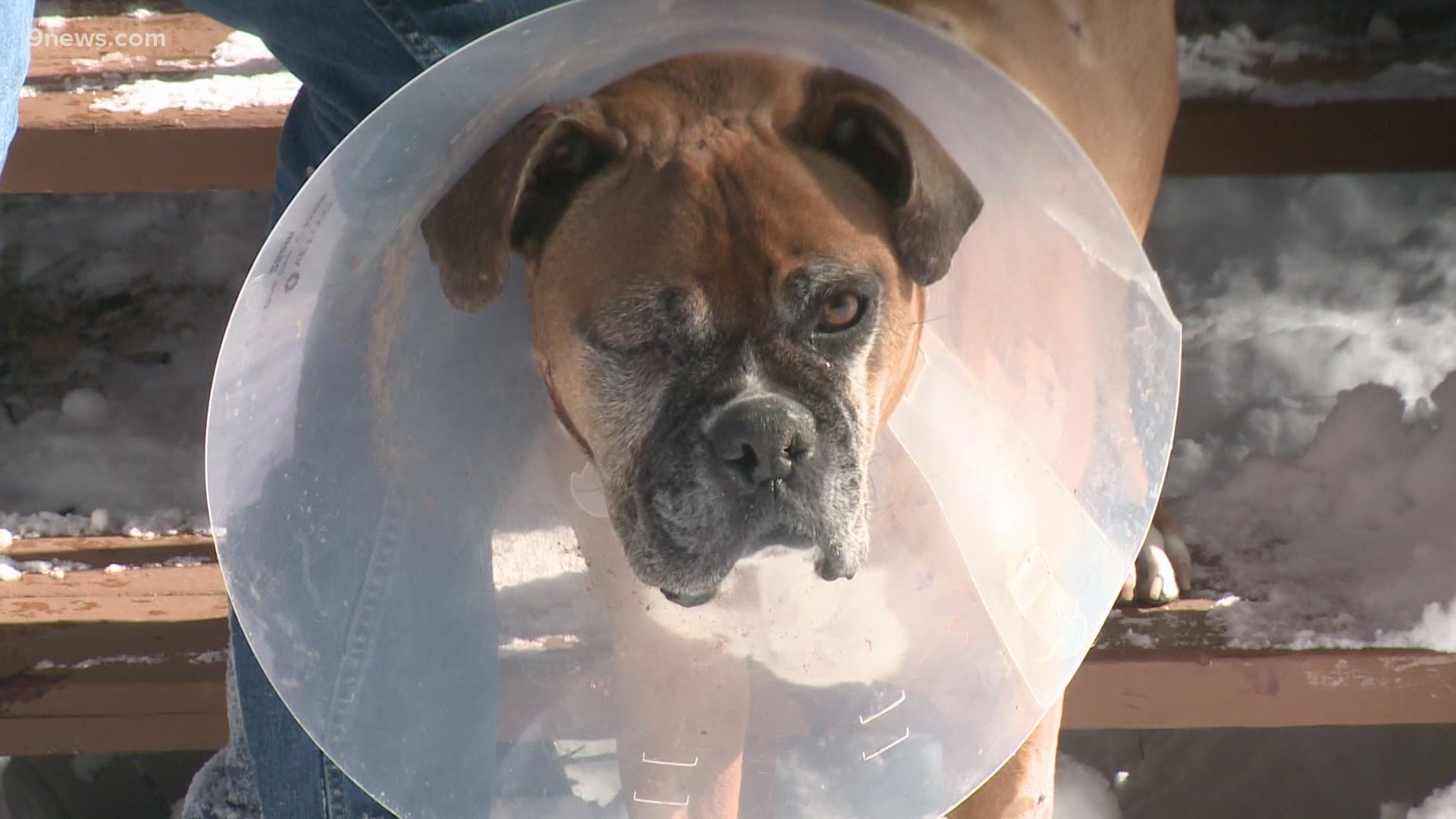 ESTES PARK, Colo. — It was around 6 a.m. in Estes Park and still dark out when Gene Whannel and his dog Sadie followed their usual morning routine.

Whannel let her outside into the backyard.

As a resident of Estes Park, Whannel knows the dangers wildlife can pose to pets in the area and said he's very aware of that danger every time he takes Sadie outside.

"When it’s dark, I usually have a habit of, I’ve got a kind of a high-intensity flashlight here by the back door," said Whannel. "So, whenever I let Sadie out to do her business in the morning, I kind of shine the light up the hillside here just to see if there’s any strange eyeballs that are kind of catching the reflection looking back at us."

He didn’t see anything strange, so he let Sadie out the back to do her thing.

As he kept a close eye on Sadie through the back door, he said he heard a familiar but strange sound – the sound he knew a mountain lion makes.

"So that caught my attention right away," said Whannel. "And just within seconds after that, I heard Sadie yelping. So, just shows the quickness of the mountain lion. I mean, just like nothing, she was on top of Sadie."

Whannel said he wasn't really thinking through his actions when adrenaline took over and he ran toward Sadie and the lion entangled on the ground.

"And, didn’t grab anything. I just, I just, instincts just made me run out that way," he said.

As he ran toward the tangled mass of fur fighting it out, he said he was searching for something, anything – a rock, a stick to throw at the lion to scare it off his dog.

It wasn't until he was standing right next to them battling when he found it, laying on the ground – an old surveying stake.

"I grabbed that surveying stake and I hit the mountain lion once. And, I kind of remember he made eye contact with me," Whallen recalled. "I swung and hit him again. And, the second time was in the face and the mountain lion released Sadie. Its jaws were on Sadie’s head. So, pretty much of a death grip, I guess. Whatever you want to call it."

"Just by God’s grace and his protection, the lion did run the other way instead of attack me," he said.

Whallen said he remembered thinking the cat might turn around and come back, but he noticed the lion kept running the other way.

At that point, his attention turned to Sadie.

"I could see that she had been pretty well chewed, chewed on," he said. "She had quite a few puncture wounds. So, we got Sadie back in the house, called our vet."

The vet acted quickly and started repairs on Sadie within 15 minutes.

The injuries suffered in an attack that lasted less than five minutes took three hours in surgery to repair – multiple puncture wounds on her chest, head and nose, her ears were pretty chewed up and she lost one of her eyes.

Sadie is now recovering as her owner questions if he would do it all over again.

"It’s one of those things that you just react and do," he said. "If somebody told me this was going to happen and I had a chance to plan it out, would I have done the same thing? Yeah, I don’t know. Your pets are part of your family. I just reacted to protect my pet."

Whallen admitted what he did was not the sensible, recommended reaction when encountering a mountain lion.

One lesson learned – Whallen won't let Sadie out anymore without a leash.

RELATED: Deer follows woman into home, attacks her with hooves