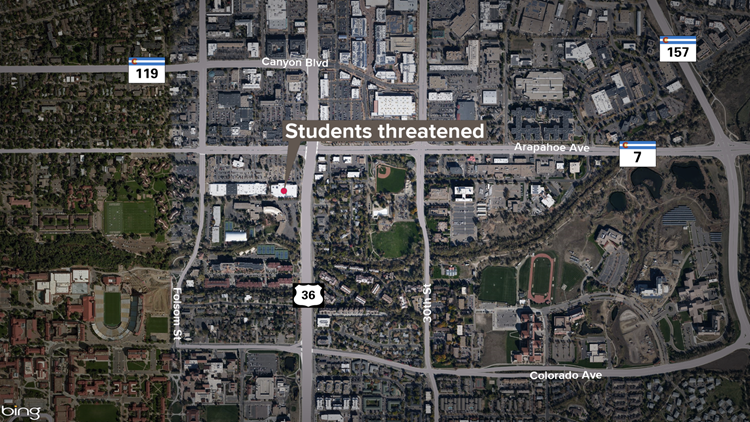 BOULDER, Colo. — Three men who are international students at the University of Colorado Boulder were threatened with a gun outside a Spirit Halloween store, according to a release from the Boulder Police Department (BPD).

They were walking in the parking lot of the store at 2798 Arapahoe Ave. around 8:30 p.m. on Oct. 8 when they were confronted by a man, BPD said.

The victims had just purchased clown masks and one of the men was wearing a mask, according to BPD.

The suspect shined a very bright flashlight on the men and then pointed and cocked a gun at them and said, “Watch out with that (expletive).”

The victims ran off and the suspect got in a white Chevy Avalanche that was parked in the parking lot, according to BPD.

The suspect is only described as a heavy-set male with a grey and white beard.

The victims recently arrived in the U.S. and did not know what to do after the crime occurred, BPD said. The following day, they contacted the International English Center at CU, who immediately notified BPD.

Anyone who may have information about this incident is asked to call Boulder Police at 303-441-3330.

Tippers can remain anonymous through Northern Colorado Crime Stoppers by 1-800-222-8477. Tips can also be submitted through the Crime Stoppers website at crimeshurt.com.

Tips through Crime Stoppers that lead to the arrest and filing of charges on a suspect may be eligible for a cash reward of up to $1,000 from Crime Stoppers.