Matthew Dolloff was being held Sunday without bail on suspicion of first-degree murder following the shooting that left one man dead. 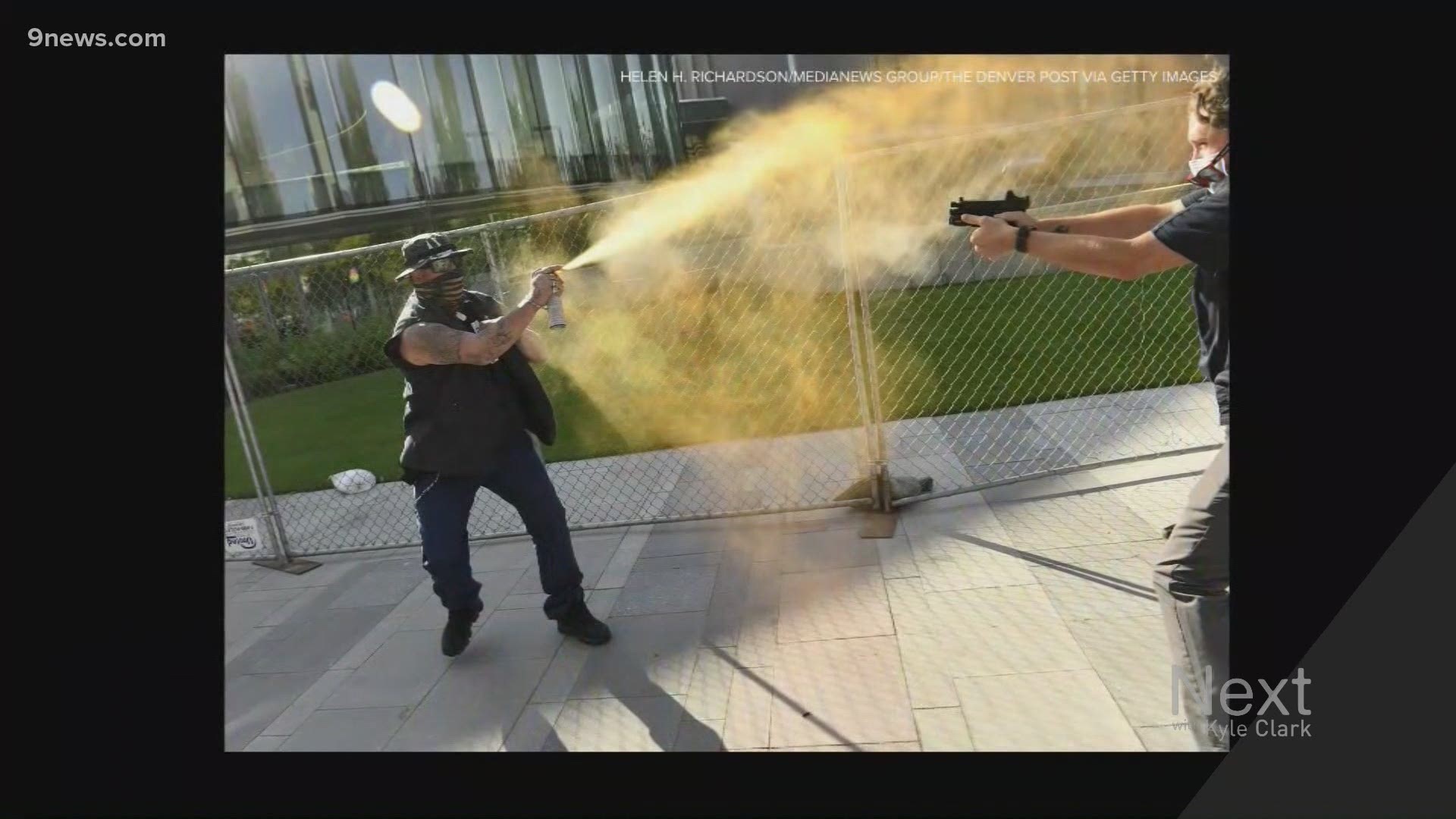 DENVER — Records show the man being held for investigation in the deadly shooting near dueling demonstrators in Denver on Saturday was working as a security guard but was not properly licensed, 9Wants to Know has learned.

The suspect, Matthew Dolloff, 30, was contracted through the company Pinkerton by 9NEWS. It has been the practice of 9NEWS for a number of months to contract private security to accompany staff at protests. Denver Police said in a tweet that Dolloff was "acting in a professional capacity as an armed security guard."

Pinkerton, however, said it does not actually employ Dolloff – Pinkerton did not share the name of the company for which Dolloff worked. Pinkerton on Monday released the following statement via its Facebook page:

Denver7 reported they have also used Pinkerton for security and have learned Dolloff was at the U.S. Senate debate hosted by the T.V. station on Friday.

Dolloff was arrested moments after a single gunshot rang out on the plaza between the Denver Art Museum and the city’s main library. He was on Sunday being held without bail on suspicion of first-degree murder following the shooting that left one man dead.

Investigators have concluded that Dolloff was acting as a security guard at the time of the incident, according to a tweet from the Denver Police Department (DPD). It reads, in part, “further investigation has revealed that, at the time of the shooting, the suspect was acting in a professional capacity as an armed security guard for a local media outlet and not a protest participant.”

UPDATE 2/3: ...not a protest participant. Immediately following the incident, rumors were circulating regarding the suspect’s affiliation with a particular group. Investigators are unaware of whether the suspect is personally affiliated with any political organization.

Dolloff could face a fine of up to $999 and a year in jail, Escudero said, if convicted of violating city law about security licensing.

And the company that employs him could also face ramifications under the law – the city ordinance requires such companies to make sure all of its security guards are licensed.

But it’s not clear who Dolloff actually works for. In a statement issued Sunday afternoon, Pinkerton officials described him as a contractor.

“We are in the process of still gathering information to better understand the incident that occurred in Denver on October 10 involving a contractor agent,” the statement says. “The agent in question is not a Pinkerton employee. Pinkerton is fully cooperating with law enforcement authorities in their investigation of this matter.”

"Obviously a tragedy this weekend that is still under investigation. A great deal of review is taking place in terms of reviewing the videos and what happened — trying to understand everything," he said. "We still of course are taking a look at the individual who is a suspect in the case who was not in compliance with Denver licensing with regards to being licensed — the security company has to be licensed, the individual security guard has to be licensed, and if you are an armed security officer, you must also have the endorsement of the Department of Safety, and we do know that this individual didn't have either of those endorsements or licenses in place.

"The lack of credentials really is concerning to us. ... While this is still under investigation, we do plan to pursue fully the scope of our legal power within the situation. [We] will allow the investigation to go forward. ... We encourage people to demonstrate safely, to demonstrate without violence in our city and to exercise your first amendment right. ... We will hold folks accountable for acting with violence and destruction in our community."

The Denver City Attorney’s Office (CAO) “will weigh any additional criminal charges related to the defendant possibly operating as an unlicensed security guard once the Denver Police Department completes its homicide investigation,” said Ryan Luby, spokesman for the CA's Office. “The CAO is also working with the Denver Department of Excise and Licenses to weigh disciplinary action against the security guard company for hiring and deploying an unlicensed guard, one without a license, much less an armed endorsement.” 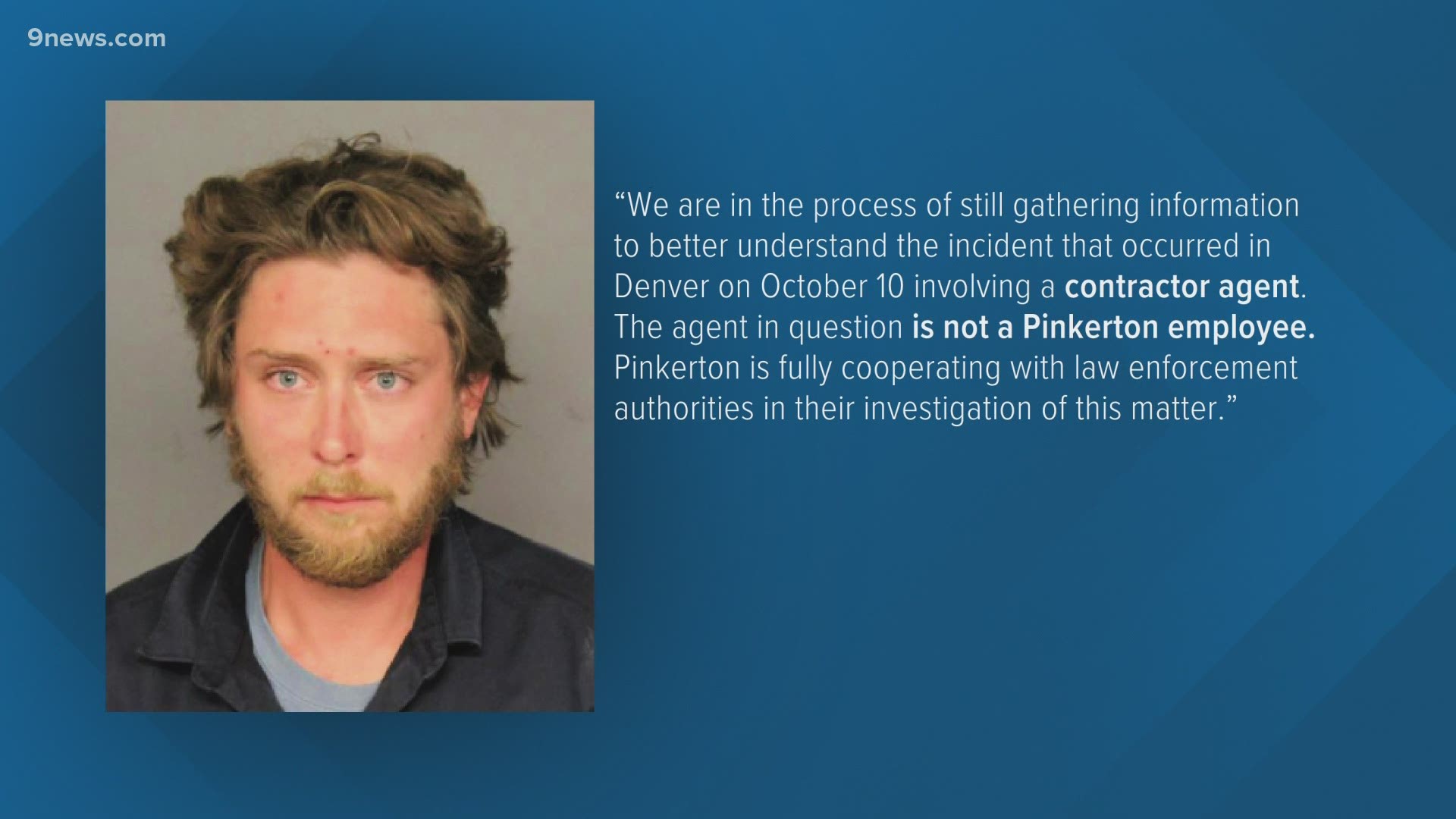 Saturday’s incident came near the end of dueling demonstrations that included members of Black Lives Matter and other groups on one side, as well as people attending what was called a "Patriot Muster." The gatherings were dispersing when a group of people gathered in the plaza near the art museum.

Photographs and videos show the immediate moment of the confrontation, what appears to be physical contact between a demonstrator and Dolloff, a spray of a chemical irritant and a gunshot.

Denver prosecutors are expected to decide in the coming days whether he will be charged with a crime.

9NEWS' management released the following statement about the incident:

EDITOR’S NOTE: Jason Whitely contributed to this report. 9NEWS is used to covering many different kinds of stories, but usually, we’re not directly involved in them. For this reason, Jason Whitely from our sister station WFAA in DALLAS is covering the initial stages of the shooting and investigation.