A small rural school district outside Colorado Springs will allow staff to carry guns with proper training, certification and school board approval. 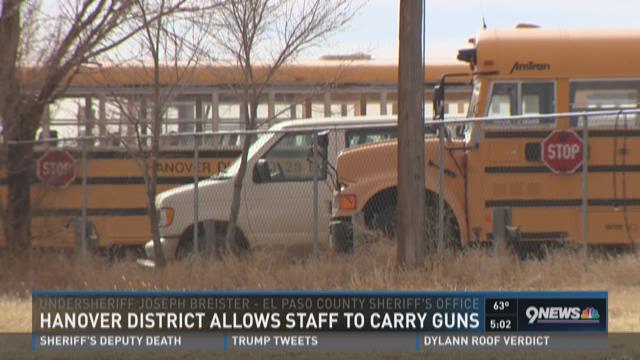 A small rural school district outside Colorado Springs will allow staff to carry guns with proper training, certification and school board approval.

The Hanover School District 28 school board voted 3-2 on Wednesday, approving a resolution that would allow employees to carry guns on school property.

Board secretary Michael Lawson was one of the people who voted for it. A firearms instructor and a former Marine, Lawson said the measure is a good idea to keep the kids safe when law enforcement is at least 15 to 30 minutes away.

Lawson admits, the vote was close and the community was split over the issue.

“We voted the conscience of the people,” Lawson said. “The response time is almost instant if you have somebody in the school.”

The details of the firearms training are still to be decided.

Lawson said currently, based on what the school district insurance company mandates, a staff member carrying a gun must complete 24 hours of firearms training. That includes four hours in the classroom, six hours of active shooter training and 14 hours of fire range training.

The Hanover School District School Board will have to decide if that is enough or if it would like more.

Lawson said the staff member who would want to carry on campus would have to get a conceal carry permit from the county, then ask the principal and get approval from the school board.

The school district will also have to work out details to an emergency response with local law enforcement. El Paso County Undersheriff Joseph Breister shared some concerns with 9Wants to Know.

“Our gravest concern if there should be an active shooter at the school is if there are teachers who have weapons and they're moving kids from point A to point B. They're trying to escort them out of the school, and we see somebody with a weapon. We don't know if that person is a combatant or a non-combatant,” Breister said. “It causes us to delay and shift focus until we ascertain that.”

One school in Weld County has been allowing staff to carry concealed weapons for a few years now.

In 2013, Briggsdale School changed its policies to allow it. Four of its employees went through training to become a security officer on top of their normal duties.

Staff members interested in concealed carry must first get approval from the board, then go through the training.