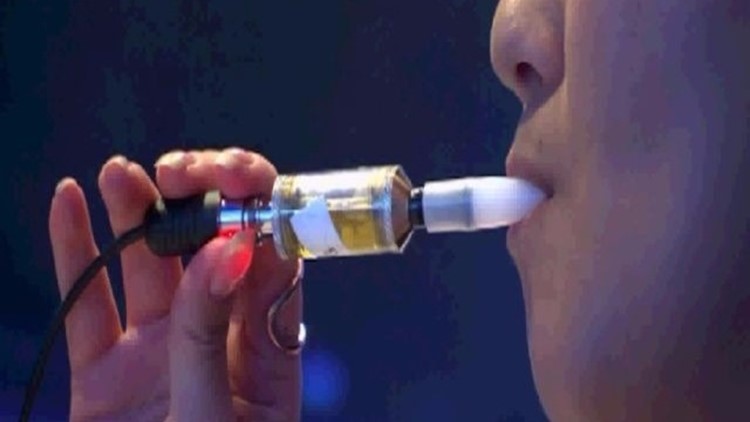 Researchers say they know more about what's not in e-cigarette vapor than what is. (WJAR)

DENVER — High schoolers in Colorado are vaping, or using e-cigarette products, at twice the national average,

according to data recently released by the Centers for Disease Control and Prevention.

Department of Public Health and Environment. “We had suspected that the trend was going up, but this

was surprising to all of us -- the fact that we are leading it is very, very concerning.”

electronic vapor products, or e-cigarettes -- found that 26 percent of high schoolers in Colorado

“currently used” these products, meaning reported use in the last 30 days. The national average for high school use was 13.2 percent.

Meanwhile, the number of teens smoking tobacco in Colorado has decreased. According to CDPHE data, just 7 percent of high schoolers reported smoking cigarettes in 2017. The Healthy Kids Colorado Survey, conducted by CDPHE every two years found that most teens (87 percent) say smoking is “risky,” but only 50 percent consider vaping “risky.”

“I think we have been great in this country talking about tobacco, but we haven’t really called out

nicotine,” Ghosh said. “A lot of youth get that tobacco is bad, but maybe nicotine they are not as

Further, Ghosh said that some teens are unaware that there is nicotine in the vaping products, or

believe they are consuming flavored water.

“You don’t always even know what is in the product you’re getting,” Ghosh said.

Still, a national survey of e-cigarettes sold in convenience stores and supermarkets published in 2017 found that more than 90 percent of e-cigarette products contained nicotine, though not all included it on the label.

Currently, there are no federal regulations requiring labels on e-cigarette products. That will change

next month. New FDA rules will require, as of August 10, 2018, that any electronic nicotine delivery systems derived or made from tobacco will have a warning label or verify with the FDA that there is no nicotine in the product.

Felberbaum, FDA spokesperson in an email.

In Colorado, electronic cigarettes are considered tobacco products, and people under age 18 may not

legally buy them. Nationally, it is illegal to sell tobacco products to people under the age of 18.

To report potential tobacco violations to the FDA, click here. For more information about vaping from CDPHE click here.