9Wants to Know analyzed a 2009 pandemic influenza plan to identify what resources Colorado may need to fight COVID-19. 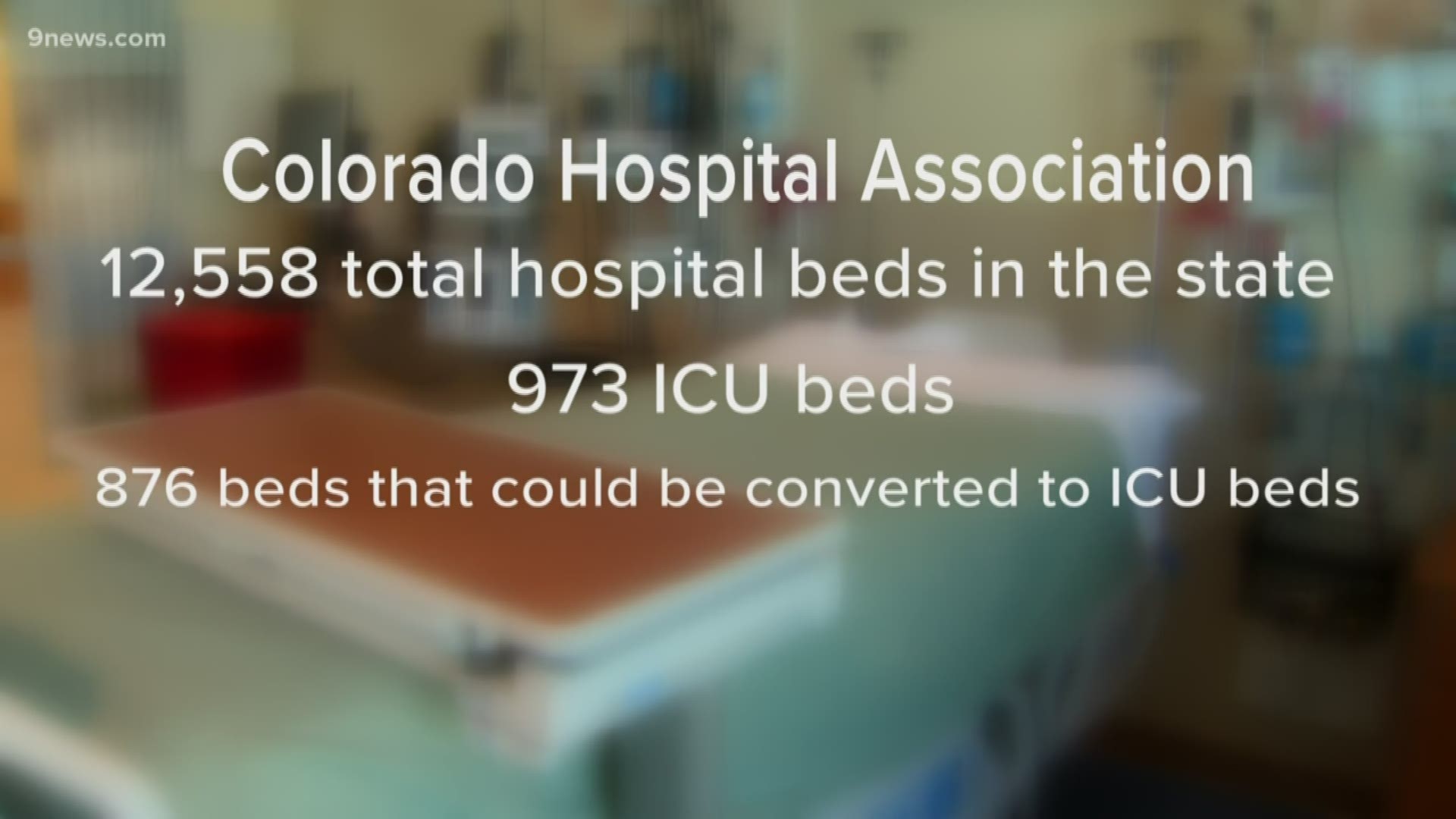 The Colorado Office of Emergency Management on Wednesday acknowledged, after questions raised by 9Wants to Know, that the agency expects a shortage of medical personnel and equipment, including ventilators and hospital beds – a reality that could complicate the treatment of COVID-19 patients.

“We expect there will be a shortage of medical resources, including personal protective equipment (PPE), ICU beds and ventilators, so we are exploring all options to get additional resources to Colorado,” said Mike Willis, director of the Colorado Office of Emergency Management. “The anticipated shortages are further reason why we are imploring Coloradans to stay home whenever possible – and definitely while they may be sick.”

The admission came on the same day Gov. Jared Polis issued a statewide stay-at-home order that will go into effect on Thursday and asked President Donald Trump to issue a state-of-emergency in Colorado.

According to Polis, the Army Corp of Engineers are in Colorado working to "build and expand" hospital capacity. Polis estimated that 10 percent of coronavirus cases will need medical help to save lives.

"At the peak of the crisis, we expect that we will need thousands more hospital beds," Polis said. "And we hope that by reducing the spread of the virus and by you staying home we’re having the time that allows us to do that."

9Wants to Know has been asking for numbers of overall beds and intensive care unit beds for more than a week. Data from 2018 released Wednesday from the Colorado Hospital Association, the most recent numbers available, said there are 12,558 licensed beds in the state and 1,849 total ICU beds.

“I worry that as the infection rates continue to climb we're very quickly going to outstrip our current supply of hospital beds,” said Dr. Payal Kohli, 9Health expert. “In my opinion, I'm really worried that we're not prepared and we won't have enough hospital beds.”

To gauge if that would be enough beds for the current COVID-19 crisis, 9Wants to Know turned to predictions the state has made based off of past pandemics.

9Wants to Know compared data from the hospital association with severe influenza pandemic guidance published by the Colorado Department of Public Health and Environment (CDPHE) published in 2009. That plan assumed 30 percent of the state's population would get sick. It’s important to note that this model does not include the “potential impact of interventions” that were not around during those earlier pandemics.

The main questions are whether the hospitals will have enough beds for people stricken with COVID-19. The ability of Colorado’s health care system to survive the brunt of COVID-19 will rely on whether the pandemic’s effects are closer to the moderate pandemics of 1958 and 1968 or the severe instance of the 1918 Spanish Flu.

2018 data released Wednesday from the Colorado Hospital Association (CHA), the most recent available, said there are 12,558 licensed beds in the state.

“Those numbers really scare me because this model assumed the flu rate of infection which is a lot less than the current COVID-19 infection,” Dr. Kohli said. “And certainly with this current infection, we do expect a higher number of Coloradans to get hospitalized. But, even if we go with a conservative estimate and go with those numbers, even in the best-case scenario, those numbers already outstrip our current supply of hospital beds. And we’re talking not just beds. We’re talking about health care personnel as well."

“So we don’t just need beds – we need healthcare workers to take care of the patients that are going to be filling those beds. And as a state, I’m worried that we may not have the capacity to handle that surge yet.”

The 1,849 total ICU beds listed in the hospital association data includes 876 ICU beds in specialty units, such as burn wards, that would need to be converted. If 0.1 percent of ill people need to go into an ICU in the best-case scenario, Colorado would need 1,727 ICU beds. The worst, at 1.6 percent of the sick population needing hospitalization, it would require 27,641 ICU beds.

Kohli said this model underscores the importance of staying home and trying to flatten the curve.

“Take for example that 70 percent of Colorado’s population gets infected,” Kohli said. “It’s not so important what percentage of that population gets infected – but, what’s more important is that period of time it takes for that percentage of the population to get infected. Because if 70 percent of Coloradans get infected within the next week or two weeks, there’s absolutely no way that our hospital system could accommodate that kind of a surge. And that would be a catastrophic scenario."

“On the other hand, if 70 percent of Colorado’s population is infected, but it’s spread out over several months or over a year, there’s a great possibility that our hospital system would be able to accommodate that.”

It’s unclear how quickly COVID-19 patients recover and would free up a hospital bed or spot in an ICU. The state does not yet know how many more general beds and ICU units have been added since 2018 and ahead of the rise in coronavirus cases. The State Emergency Operations Center is working to get an updated count.

“State epidemiologists are working to identify the state’s need, in consultation with research and health care organizations,” Willis said. “This research will inform our planning for surge capacity to support local communities, identifying critical priorities, requesting additional resources and implementing social distancing measures to reduce the demand on our health care systems.”

Part of that process will be updating the model used in the 2009 pandemic plan, which CDPHE said will be done soon.

Read the full guidance on what the state would need to respond to a pandemic here: 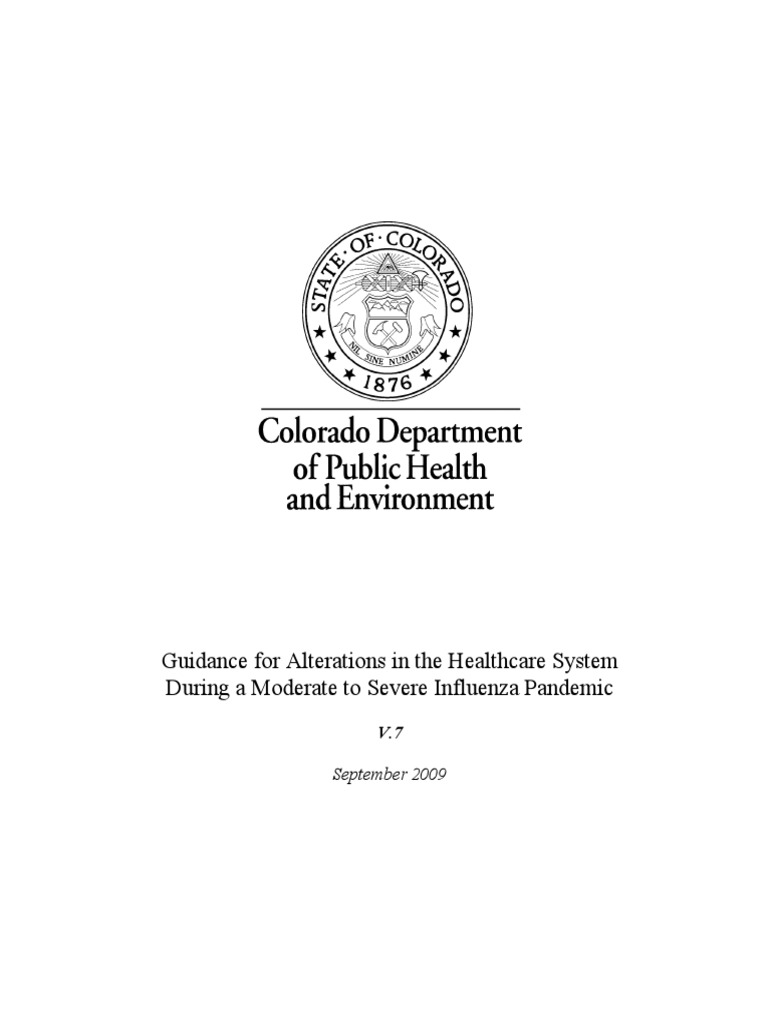 2009 CDPHE Pandemic Guidance | Influenza | Influenza Pandemic
September 2009 Participants Involved/Acknowledgements The following persons contributed to the development and/or approval of the guidance issued in thisdocument: 3 Executive Summary See the 'Triggers' for Considering Activation of Pandemic Triage' section on page 25 for moreinformation. !"