'Just hold onto something': Family describes surviving avalanche that swept them off I-70

Shaune Golemon and his family were heading back from a day of skiing when an avalanche swept their truck into the median.

SUMMIT COUNTY, Colo. — Shaune Golemon and his family were headed home from a day of skiing on Sunday when the unimaginable happened. His young daughter, who was in the back seat of their truck, was the first to notice the danger coming their way as they drove home on Interstate 70.

"She started saying, ‘Hey! Hey! Hey!' You know, trying to get our attention, you know, ‘What is that?'" Golemon said. "And Tram [Shaune's wife] looked over and she started yelling, you know, ‘Avalanche! Avalanche!”

He said he had seconds to decide what to do. Golemon said he thought about trying to speed up or slow down, but ultimately, due to the road conditions, decided it was best to take his foot off the gas and coast.

“So much was going through my head at the time. I was checking the rear-view to see if I had room to stop, you know," he said. "I was trying to gauge, 'Can I outrun it?' And eventually, I told her, I said, ‘There’s nothing we can do. Just hold onto something.'"

The Golemon's vehicle was one of several swept off the eastbound lanes of the highway and into the median by an avalanche that was reported just after 5 p.m. Sunday afternoon.

"I let off my brakes and then, here it comes. It just blasts us," he said. "I just got to drive through a cloud of smoke. It can’t be that bad, right? Then, once we felt it, that’s real fear [that] started to kick in."

The family was caught in the second of two avalanches on Sunday. Both happened between Copper Mountain and Frisco in an area known as Officer's Gulch. I-70 was closed down for several hours Sunday afternoon after the second slide covered the highway.

"As soon as it hit and we felt the force and we felt our truck, you know, literally sliding off the road, that’s when it became really real," Golemon said. "It was loud. It was complete white-out. We couldn’t see anything."

Dash cameras mounted inside the Golemon's truck show their vehicle being overcome by the wall of the snow.

WATCH BELOW: Man describes being caught in an avalanche on I-70 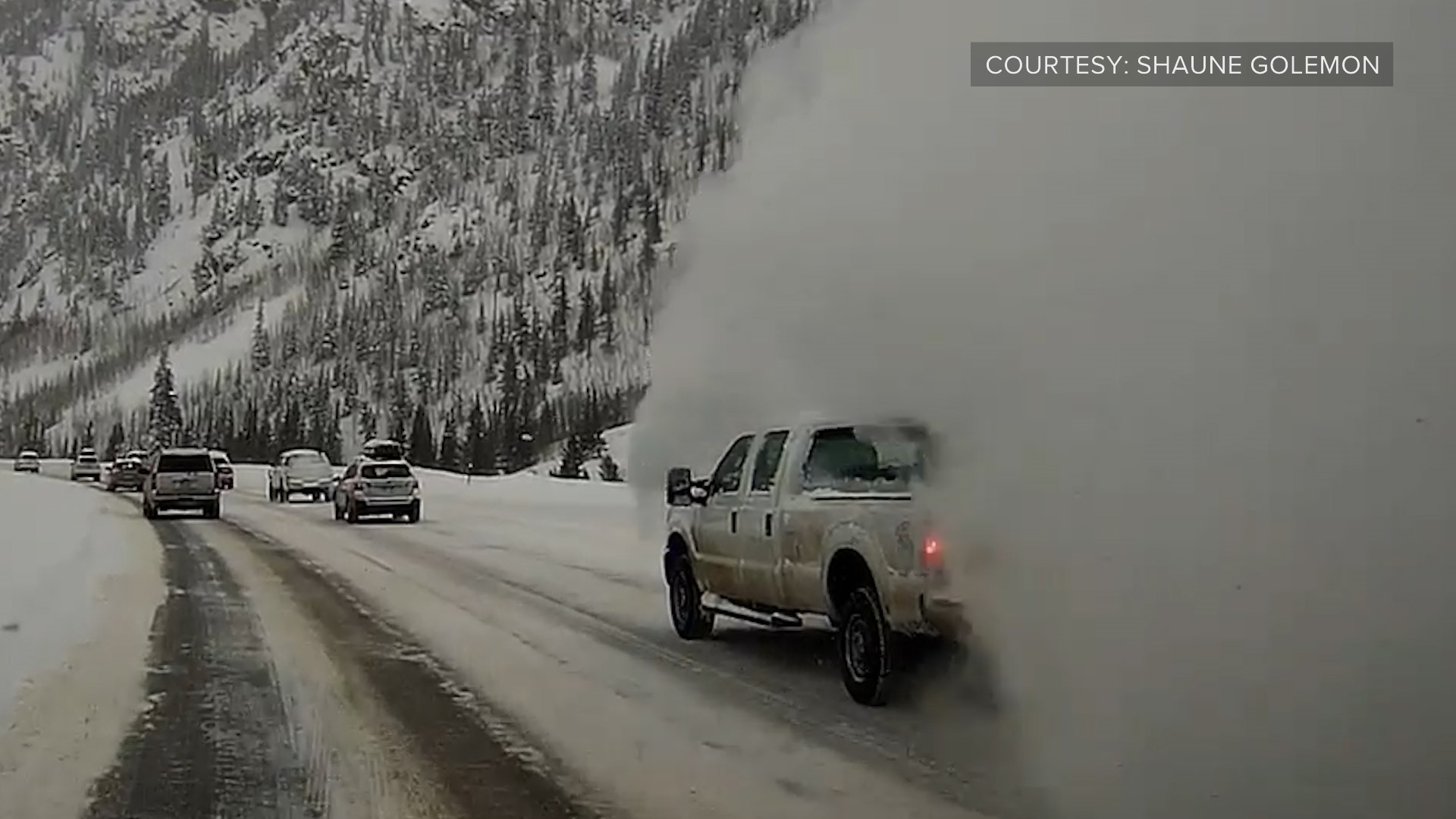 The family opened the vehicle's sunroof for some fresh air while they waited for emergency services and a tow truck to show up. Luckily, no one was injured.

“Yeah, surreal. Shock and gratitude, right? Gratitude that we made it out okay," Shaune Golemon added.

Brian Coffin was headed west on the highway when the slide came down and covered the eastbound lanes.

"Came down around the bend talking to my fiancee over Bluetooth and just start screaming at the top of my lungs, I got an avalanche coming right at me," he said.

He had to stop because of the giant snow cloud that engulfed his vehicle.

"Felt the air move, I was expecting it, but it never shoved me just the cloud engulfed me," he said.

He called 911 for the drivers on the other side of the highway that weren't so lucky.

"I could see that they were buried up to their doors," he said. "I didn't want to be one of them, my inner voice was, 'Get out of ground zero!'"

The highway was closed between Edwards and Frisco but reopened shortly after 6 p.m. Sunday.

That was the second avalanche in the Officer's Gulch area Sunday.

Earlier that day, a slide was caught on camera barreling toward cars caught in I-70 traffic.

That slide did not close the highway. Witnesses told 9NEWS a light dusting of snow reached the road but did not cover it substantially.

CDOT said Monday it has been at least 30 years since an avalanche has made it down to the highway in that area.

Avalanche danger on Sunday was extremely high, with the Colorado Avalanche Information Center issuing an Avalanche Warning through Monday morning.