Mom seeks accountability from airline after being stopped, questioned after flight at DIA

Mary MacCarthy is white. Her daughter is biracial. She believes they were reported as suspicious because of the difference of race. 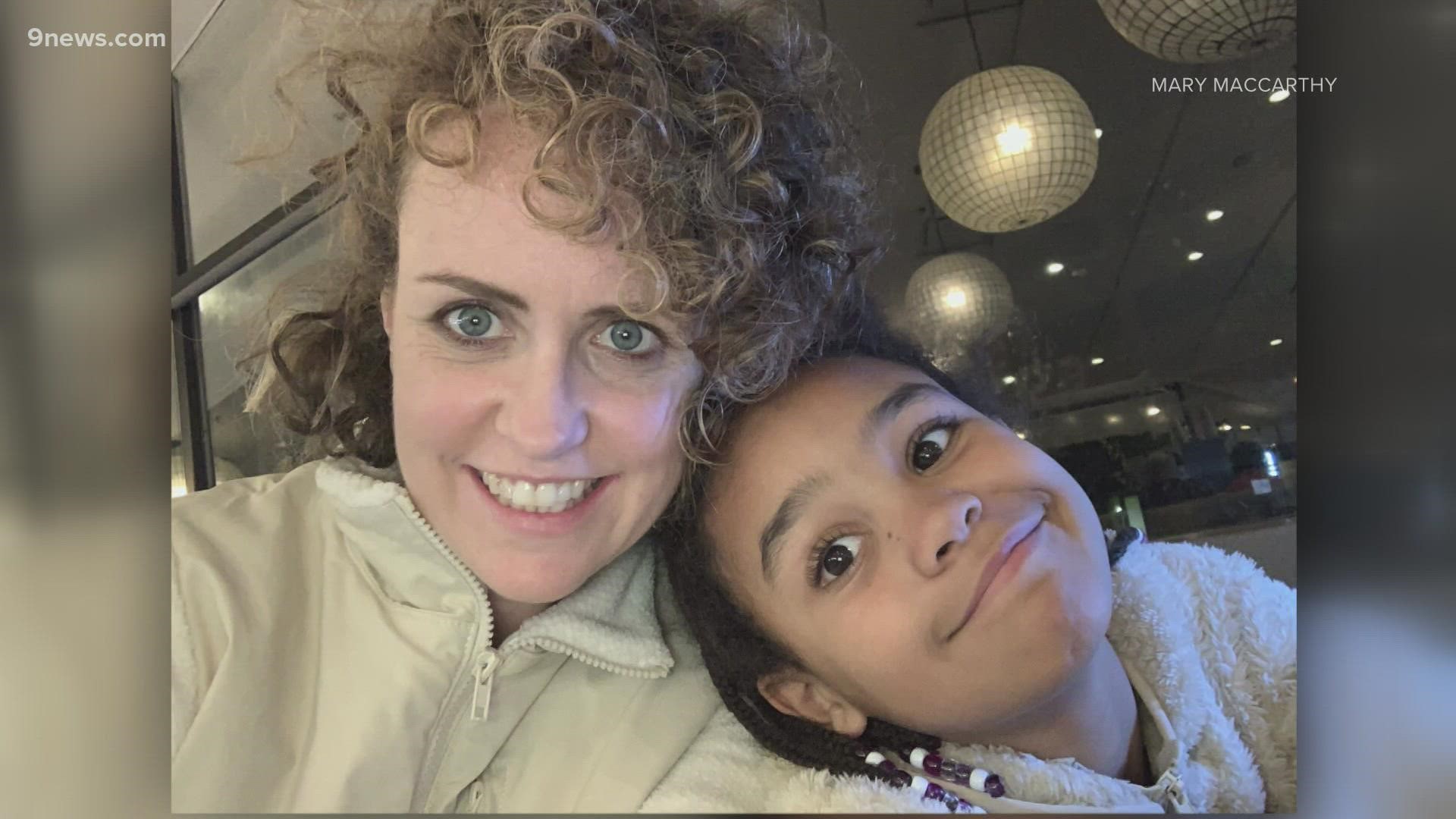 DENVER — A California family says Southwest Airlines reported them to Denver authorities as suspicious and a possible case of human trafficking – due to the family’s mixed race.

Mary MacCarthy was traveling to Colorado with her 10-year old daughter, Moira, last month for a funeral. MacCarthy is white, and her daughter is biracial.

MacCarthy said the pair booked a last-minute Southwest flight from Los Angeles to Denver, with a stop in San Jose, after her brother died unexpectedly.

They were in the last group to board. Southwest does not have assigned seats, and MacCarthy said they were unable to find two remaining seats together.

“I went to the flight attendant and said 'Look, my daughter is only 10 and we're traveling for a funeral. Can you find a way for us to sit together?'”

The MacCarthys found passengers willing to swap seats so they could sit together.

When they got off the plane in Denver, MacCarthy said, she and her daughter were stopped by two police officers and a representative from the airline. At first, MacCarthy said she was worried someone else in the family died.

“They said no, your family is fine,” she remembers. “They said you and your daughter have been reported for suspicious behavior--from what I recall, they said prior to boarding in San Jose--and also that we boarded suspiciously late.”

In the video, an airline employee and the officers can be heard apologizing, and explaining they stopped the pair after concerns were reported about the family’s behavior.

MacCarthy said she became even more upset in a follow-up conversation with investigators.

“Ten days later, I get a phone call from DPD's trafficking unit that they’re following up on the suspicion that I am a human trafficker,” she said.

In a redacted police report, DPD investigators said a Southwest flight attendant reported possible human trafficking. The crew member alleged the two were “last getting on the plane.” Once the two found seats together, the flight attendant reported “the mom and daughter did not talk during the flight and she felt it was odd, and also the mother did not allow the child to talk to flight crew.”

Mary said those allegations are false.

”She claimed we had boarded suspiciously late – which is not true, we boarded with our boarding group,” she said. “She claimed my daughter and I didn’t speak to each other throughout the flight, which isn’t true and also people are wearing masks. It's hard to judge if people are talking to each other. And she claimed that I forbade the flight crew from speaking to my daughter, which is in no way true at all.”

MacCarthy said she and her daughter were exhausted and emotional after the unexpected death in the family.

“I was deeply angered to see these untruths in this official report," she said.

The initial police report also says MacCarthy “did not want police talking to her daughter,” and “did not want to give any information.”

MacCarthy said that characterization of the conversation is unfair, and points to the video she captured of herself speaking with authorities after the flight.

“I’m angry at police and Southwest Airlines for their untruths and for the way they handled the situation which was just ordinary travel under difficult personal circumstances,” she said. “The only conclusion I can draw from this is they saw a white woman with a black child and that was enough for them to flag us as suspicious for a very serious crime.”

According to the police report, detectives had additional conversations with MacCarthy and ultimately determined “there is no basis to conduct any further investigation” and considered the report “unfounded.”

A spokesman for Southwest Airlines offered the following statement by email Friday:

“We were disheartened to learn of this mother’s account when traveling with her daughter. We are conducting a review of the situation internally, and we will be reaching out to the Customer to address her concerns and offer our apologies for her experience traveling with us. Our Employees undergo robust training on Human Trafficking. Above all, Southwest Airlines prides itself on providing a welcoming and inclusive environment for the millions of Customers who travel with us each year.”

In 2019, the airline announced new training for staff around awareness and identification of human trafficking.

Southwest has not offered any details about that training or how it was used in this case. The airline said it partnered with an organization called
Polaris to create and offer the curriculum for employees. 9NEWS reached out to Polaris to learn more about the curriculum, but did not receive a response Friday evening.

“I’m grateful for anyone who is looking out for [victims], but if you’re training people in human trafficking, you also need to train your staff on how to not be racist,” MacCarthy said. “A slight conversation with me and my child could have cleared up any suspicion that day. Treat people like human beings and think twice in any situation before you call police on a person of color.”

MacCarthy, who has retained Denver-based attorney David Lane, said she is looking for more accountability from Southwest after this happened.