Voters in Colorado have the power to throw judges out of office, but a 9NEWS analysis finds voters almost never use that power—even when the state panel that reviews judges decides they don’t deserve to keep their jobs. 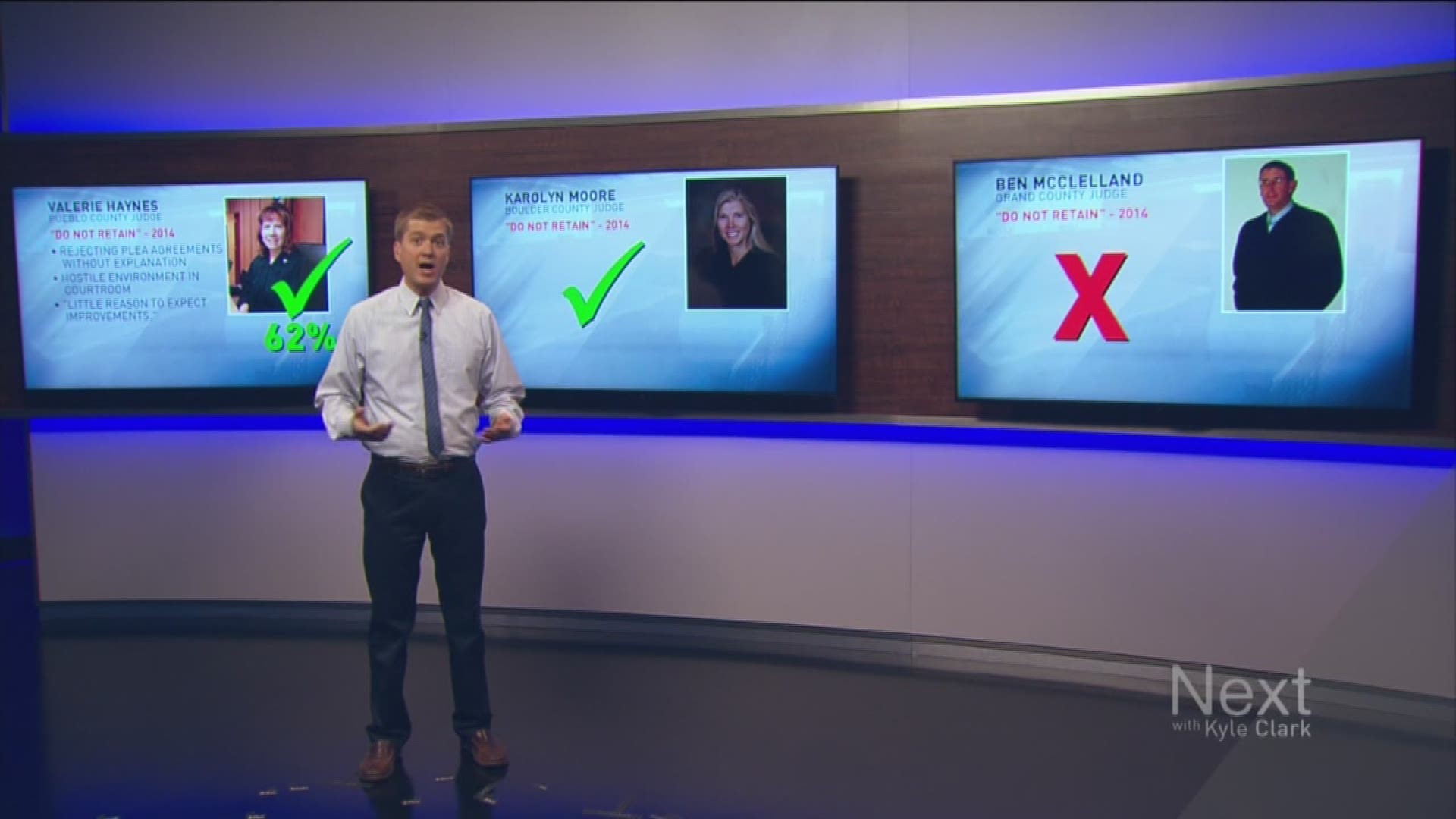 KUSA – Voters in Colorado have the power to throw judges out of office, but a 9NEWS analysis finds voters almost never use that power—even when the state panel that reviews judges decides they don’t deserve to keep their jobs.

When you fill out your ballot this November, you’re likely to pause at the questions about whether to keep state and local judges.

In the 2012 presidential election, nearly one in four Colorado voters skipped the question about whether to retain a state Supreme Court justice.

Many lower courts saw a steeper drop off. But it matters who serves.

Judges decide who gets custody in a divorce, whether a drunk driver goes to jail and how long someone gets put away for violent crimes like rape or murder.

The job is taxpayer-funded and pays a six-figure salary.

VOTERS ONLY TAKE THE ADVICE 30 PERCENT OF THE TIME

Colorado voters receive job reviews for judges that come with a recommendation about whether the judge should be retained in office.

9NEWS’ investigation found that since 1998 only three judges have lost their elections following a “do not retain” recommendation. One additional judge with a bad review chose to resign rather than face re-election.

On average, a judge deemed unfit to stay on the bench will win re-election in Colorado with 54 percent of the vote.

That is a drop from the overall re-election average for Colorado judges, which is about 70 percent.

The Colorado Office of Judicial Performance Evaluation provides voters with surveys, data and recommendations about every judge up for a retention election, but more than 60 percent of voters don’t know about this resource. For example, the panel unanimously voted to not retain Pueblo County Judge Valerie Haynes in 2014.

The group cited concerns from its survey participants that included creating a hostile environment in her courtroom, lacking compassion, rejecting plea agreements without explanation and failing to understand her performance issues -- leaving “little reason to expect improvements to occur.”

Haynes is still a judge. She won 62 percent of the vote on election night and kept her seat.

Every expert we talked to for this story believed that judges who earn a “do not retain” recommendation deserve to lose their jobs.

Former Colorado Secretary of State Scott Gessler serves as a statewide commissioner for the review program and has ideas about how to set it up differently—but says today’s system really does turn up the bad apples.
“It’s rare to draw a non-retention recommendation, and commissioners don’t take that lightly,” Gessler said. “When it happens, people should definitely vote that judge off the bench.”

THE INFORMATION ISN’T EASY TO READ

The fact that 70 percent of the judges recommended for firing kept their jobs surprised Colorado Supreme Court justice Rebecca Kourlis.

“I don’t think that’s the way it should work,” Kourlis said. She runs a think tank at the University of Denver called the Institute for the Advancement of the American Legal System.

One of its projects, called Judges Aren’t Sexy, aims to get better information on judges into the hands of voters.

One thing Kourlis recommends is simplifying the information we give to voters.

The current rules for Colorado’s judicial evaluations require the panel to put a judge’s biographical information, survey methodology and strengths before the critical information.

The Judicial Performance Commission’s rules requires the explanation of why voters should reject a judge to appear in the final paragraph.

In the news world — we call this “burying the lede.”

It doesn’t help that voters who try to do this research have to dig through several paragraphs of college-level reading before getting to the substance behind a “do not retain” recommendation.

Neither wanted to talk to us for this story.

The panel said Schiferl’s writing skills are poor, he can’t accept constructive criticism and the majority of attorneys surveyed think he’s biased in favor of the prosecution.

Straus’ write-up centered around her demeanor and below average marks. But when you dive into the data in her survey report, you find that 81 percent of attorneys think she’s biased for the prosecution and 59 percent gave her a failing grade for treating participants with respect.

You won’t see it in your state-issued voter guide, but the Colorado Office of Judicial Performance Evaluation gives each judge a GPA-like grade. We turned those into letter grades using CollegeBoard’s conversion chart.

For your voting decisions, here are the letter grades for all 108 judges up for re-election in Colorado in 2016:

Judges Sorted by Grade by 9news on Scribd

Judges Sorted by Last Name by 9news on Scribd

Straus and Schiferl weren’t the lowest scoring judges on the 2016 list. Both of them got a B. The judge with the lowest “GPA” was Tenth District Judge Jill Mattoon.

When you read through her report and data, you find survey respondents rated her favorably on conducting her courtroom in a natural manner and overall demeanor.

No one thought Mattoon was very biased in favor of the prosecution, and 67 percent of attorneys rated her as completely neutral.

Colorado is one of six states that holds retention elections for all level of courts. Alaska, Iowa, Nebraska, Utah and Wyoming are the others.