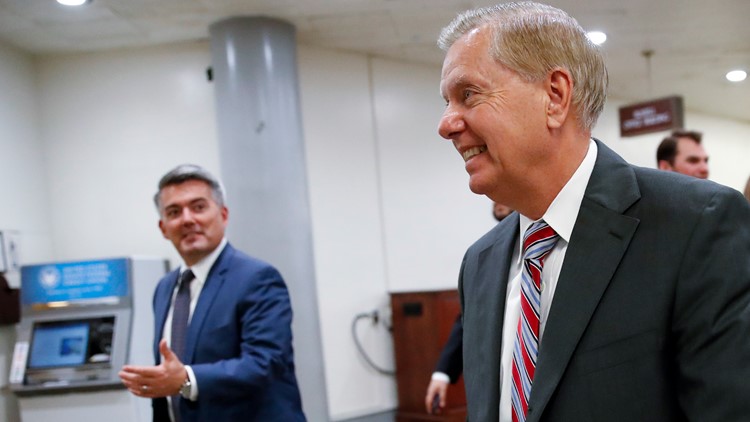 Photo by: AP
Senate Judiciary Committee Chairman Lindsey Graham, R-S.C., center, with Sen. Cory Gardner, R-Colo., left, walk to the Senate chamber for votes on federal judges as a massive budget pact between House Speaker Nancy Pelosi and President Donald Trump is facing a key vote in the GOP-held Senate later, at the Capitol in Washington, Wednesday, July 31, 2019. Many conservatives in the Republican-led Senate are torn between supporting President Donald Trump and risking their political brand with an unpopular vote to add $2 trillion or more to the federal debt. (AP Photo/J. Scott Applewhite)

In a statement Friday, Gardner said:

“I had hoped Speaker Pelosi would turn away from the sharp partisanship that has driven the House process but she has not. I hope people will read the resolution and that everyone supports a fair and transparent process. This resolution shouldn’t be necessary, but when a serious investigation to get all of the facts turns into a political circus, it’s necessary to be reminded of it.”

Republican Sen. Lindsey Graham of South Carolina, a top ally of President Donald Trump, introduced the resolution. He announced the move Thursday and said the Senate's top Republican, Mitch McConnell, is a co-sponsor.

The nonbinding resolution gives Senate Republicans a chance to show support for Trump at a moment when Trump is urging his GOP allies to get tougher and fight harder for him as the House impeachment probe gathers momentum.

In part, the resolution said the “House of Representatives is abandoning more than a century’s worth of precedent and tradition in impeachment proceedings and denying President Trump basic fairness and due process accorded every American.”

Senators who signed the resolution asked for access to proceedings and said Trump deserves due process.

Many Senate Republicans are taking a wait-and-see approach amid the House impeachment inquiry. Rather than commenting on the substance of the probe, they are united in complaining that the House is taking depositions from witnesses behind closed doors.

Also Friday, 9NEWS again asked Gardner if he feels it’s appropriate for a president to ask a foreign government to investigate a political rival. His team did not respond.