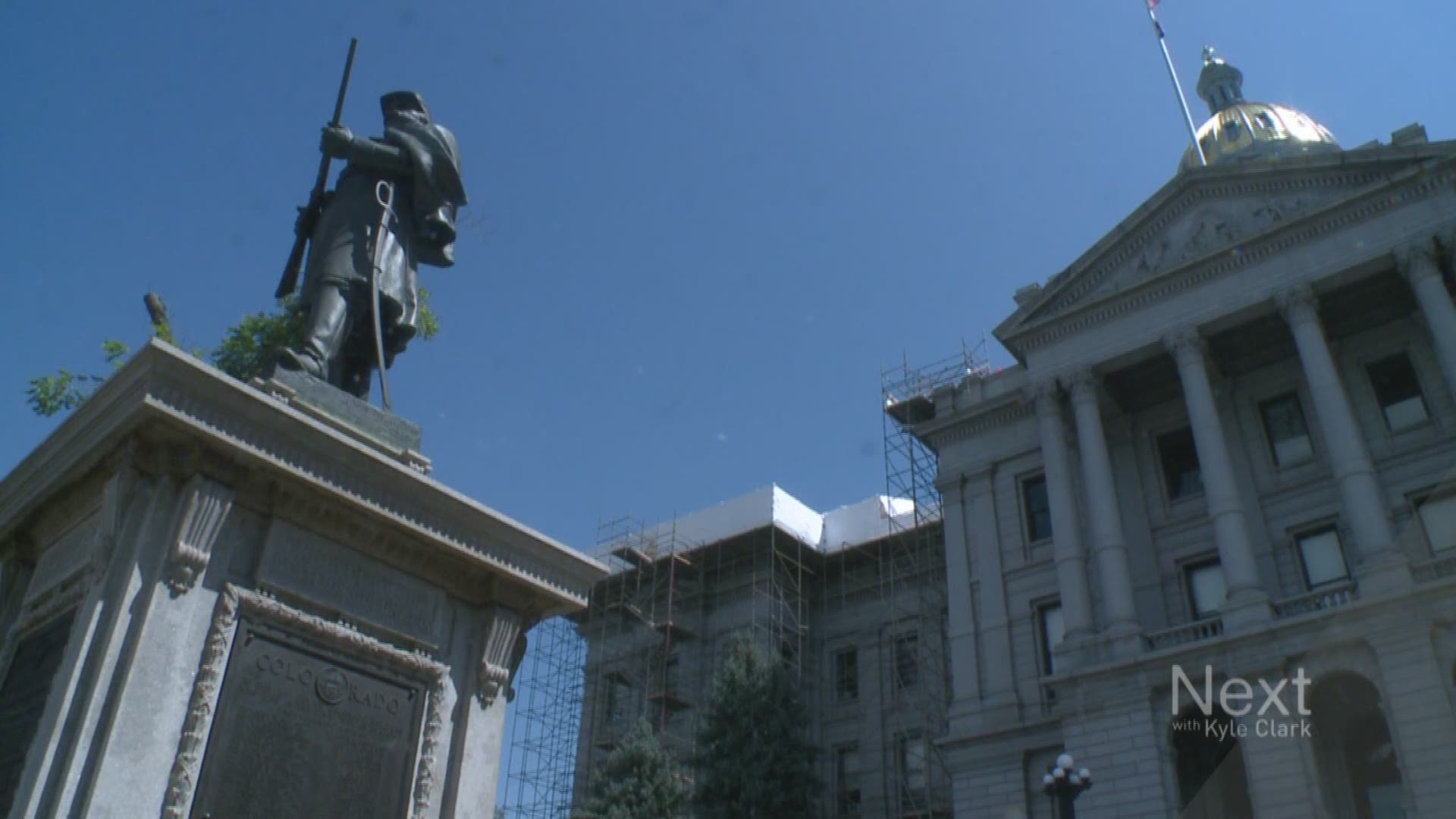 A petition is asking people to support removing a statue in front of the Colorado state capitol building, claiming it memorializes John Chivington, a Civil War-era colonel who led the Sand Creek massacre.

The petition already has close to 2,000 signatures, and is even gaining attention from other states like New York and South Dakota.

There's a slight problem with this petition.

The soldier on top of the monument is not Chivington. It is a Union cavalryman.

The statue is part of a Civil War monument in front of the capitol which honors Colorado soldiers who fought in the Civil War.

The man who organized the petition said he didn’t want to talk on camera about it with 9NEWS Thursday, saying he didn’t know much about the statue’s history.

So we did our own research.

The history of the statue

The statue is known as the Colorado Soldiers Monument. It’s located in front of the west steps to the capitol building, flanked on each side by cannons from that era.

The statue was designed by Captain John D. Howland, a Union veteran of the Battle of Glorieta Pass in New Mexico, the westernmost battle in the Civil War.

According to History Colorado, the statue is an eight-foot-tall dismounted Union cavalryman. He looks to the southwest, holding a rifle to his chest.

An appraiser later discovered Howland got his inspiration from the painting of a soldier from the ranks of the Colorado Volunteers.

Since 9NEWS pointed out it is not a statue of Chivington, the creator of the petition acknowledged his mistake and changed the petition. He is now asking for the removal of a Chivington’s name from the memorial.

Col. John Chivington’s name is still on the memorial, under a section that lists military leadership.
Chivington was acclaimed initially as a hero in the Civil War, after his troops forced the retreat of Confederates at Glorieta Pass in New Mexico.

But years later in 1864, he would lead a group of troops to attack a village of Cheyenne and Arapaho in southeastern Colorado, killing more than 150 people including Native Americans, many of whom were women and children.

“The information needs to come out about what John Chivington did to our native American tribes,” House, Jr. said.

A change at the monument

The plaque on the monument in front of the capitol lists Sand Creek as a battle.

“Tribal leaders saw that ... some legislators at the time saw that and they brought the issue up - they needed to change it. It wasn't a battle - it was a massacre,” House, Jr. said.

In 1999, state lawmakers debated changing the plaque to reflect that Sand Creek was a massacre. They voted instead to add a plaque, indicating the change.

“By designating Sand Creek as a battle, the monuments designers mischaracterized the actual events,” the plaque reads in part. It goes on to describe what really happened.

“Instead of removing it they wanted to educate people about what happened,” House, Jr. said. “As a way of just not erasing history but continuing to educate folks.”

Governor John Hickenlooper, D-Colorado, was the first Colorado governor to issue a public apology for the events that unfolded at Sand Creek. He also directed the state to build a memorial for the massacre on the capitol building grounds.

The state has spent the last few years fundraising and has finally raised enough for the new memorial.
House, Jr. said state leaders are working with leaders from the tribes to figure out a good location for the memorial.

He also said he doesn’t want the memorial at the capital to take away from the actual site of the massacre. The National Park Service operates a National Historic Site in Eads, Colorado at the site of the violence.