In a tweet on Tuesday, Tancredo said he's being unfairly portrayed as wanting to cut retirement benefits for teachers.

Republican gubernatorial candidate Tom Tancredo says he’s been unfairly accused of wanting to cut teachers’ retirement benefits, despite recently saying that those same benefits “have got to be cut” in comments captured on video.

In a tweet on Tuesday, Tancredo said he’s being unfairly portrayed as wanting to cut retirement benefits for teachers:

“Those who keep tweeting ‘Tancredo wants to take negotiated benefits from teachers’ are perfect examples of fake news pervayors. [sic] Find anything in my PERA comment that leads to that conclusion.”

Those who keep tweeting “Tancredo wants to take negotiated benefits from teachers” are perfect examples of fake news pervayors. Find anything in my PERA comment that leads to that conclusion.

PERA is the pension program for public employees in Colorado—and the subject of intense political debate.

By and large, Republicans see PERA as financially unsustainable because it guarantees public employees a retirement income that the state would be on the hook to pay for if the program ever ran short of funds.

Republicans would prefer to switch public employees to a “defined contribution” plan, similar to a 401(k) plan, in which the state simply matches a payment into the program that allows employees to invest for the future, but which does not guarantee a level of income to retirees.

So does Tancredo want to “take” – or reduce—benefits from teachers in Colorado?

HE SAID HE WANTS TO CUT THE BENEFITS—ON VIDEO

In a November 2017 Q&A session with the Jefferson County Republican Men’s Club, Tancredo did say he wants to “cut” benefits when asked by a voter what his solution to PERA would be.

And the club captured it all on video. 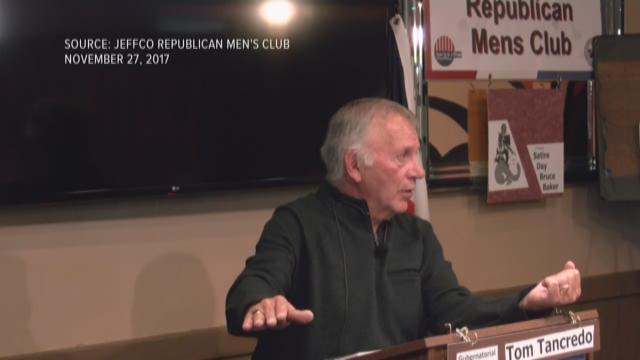 Tancredo first discussed his desire to switch PERA to a defined contribution plan and then closed his answer by calling for cuts.

“The benefits have got to be cut. It’s really all that can happen to reduce the taxpayer cost,” Tancredo said in his answer about PERA. “It’s all tax money. You have to come to understanding you can’t maintain this level of commitment.”

Tancredo declined to be interviewed for this story but denied his comments were inconsistent in an exchange of text messages with 9NEWS.

“I never said today’s negotiated benefits will be changed,” Tancredo said, in contrast with his comments in the video. “As a former teacher, [negotiated benefits] means the wide range of benefits I received through the negotiation process. They include pay raises, sick days, and a host of other things. I have never said anything about trying to take them away.”

The solution to underpaid teachers is not stealing negotiated retirement benefits from people who negotiated them in good faith and who sacrificed higher pay to secure them.

This is theft. It's no surprise that an anti-labor Tom Tancredo supports it. #copolitics

Note the commenter’s use of the term “negotiated retirement benefits.”

And as far as retirement benefits go, we have video of Tancredo saying they must be “cut.”

And Tancredo’s own tweet acknowledges that the subject in question is retirement, referencing his own “PERA comment.”

Tancredo did say in our text exchange that cutting isn’t necessarily the only solution to PERA’s problems, that structural changes might be able to do the trick instead.

But that’s not what he told the audience at the men’s club.

DEMOCRATS FLIP ON TANC, TOO

While the video in question was posted publicly on the website of the Jeffco Republican Men’s Club, it was brought to 9NEWS’ attention by the state Democratic party-- seeking to generate negative press for Tancredo.

That’s a complete 180 from how the Democrats approached Tancredo last cycle.

In 2014, a political group affiliated with the Democratic party called “Protect Colorado Values” paid for a bogus attack ad aimed at helping Tancredo win the GOP gubernatorial primary by telling Republican voters that he was “too conservative.”

Depending on who you ask, the ad campaign either backfired or failed—Tancredo lost the primary to Bob Beauprez, a candidate closer to the establishment. Beauprez went on to lose to Gov. John Hickenlooper (D-Colorado) in the 2014 November election.

Instead of helping Tancredo in the primary and hoping to beat him in November, this time Democrats are treating Tancredo’s candidacy as a legitimate threat in the era of Trump:

Tancredo has made it clear that he will embrace Trump's hateful brand of politics if he wins his race. #copolitics https://t.co/QcF6PPJUGm

9NEWS political analyst Floyd Ciruli says Democrats are still happy to run their nominee for Governor against Tancredo this year. After all, Colorado voted for Hillary Clinton in 2016.

He says there’s a simple reason that Democrats aren’t trying to help Tancredo in this year’s primary: Tancredo embraces President Trump’s base more than the other credible candidates do.

“He is going to win [the primary,]” Ciruli said of Tancredo. “Democrats don’t need to help him.”