Supporters of the assisted suicide law have asked 9NEWS not to use the word "suicide." 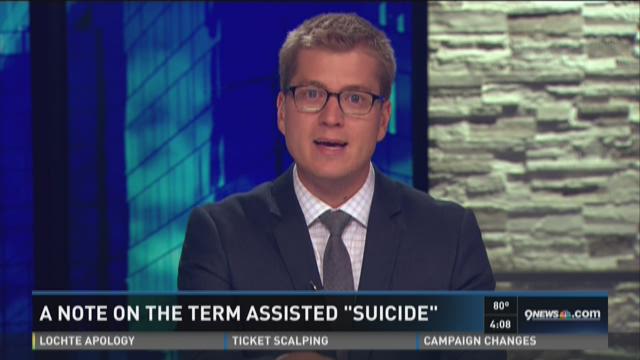 This November, you're going to get to vote on an assisted suicide law in Colorado.

Supporters of that law have asked 9NEWS not to call it assisted "suicide." They'd rather we call it "medical aid in dying."

What follows is our explanation of why we are not going to grant that request:

First off, 9NEWS has no position on this ballot question. Nor do we take the issue lightly.

We have a duty to tell you about it in simple, direct language. That’s why we’re not going to stop using the word “suicide.”

Supporters of the measure argue the word “suicide” is too friendly to the opposition because it may make you think of someone who ends their life for no good reason.

In contrast, the proposed law does require a reason: you’d need to be diagnosed with a terminal illness to get a life-ending prescription.

“The act or an instance of taking one's own life voluntarily and intentionally especially by a person of years of discretion and of sound mind.”

“The action of killing oneself intentionally”

“The intentional taking of one's own life.”

All three definitions have something in common: they don’t depend in any way on the reason a person chooses to end their life, just that they do so on purpose.

Supporters of this proposal want to change the dictionary definition of suicide. They might succeed one day.

Changes in the law can end up changing our language.

If you don’t believe us, find an old dictionary and look up the word “marriage.”

But it’s not our job in the news business to change the dictionary.

It’s our job to use plain language that’s current and accurate-- and that’s what we’ll keep doing.

This explanation of our editorial decision is meant to explain why 9NEWS is not eliminating the term “suicide” from our coverage of this issue—it does not mean that this is the only language you’ll hear us use to describe it. There are plenty of other accurate (albeit more verbose) ways to describe the policy such as, “allowing terminally ill people to get medication to end their own lives.”

Some opponents of the ballot measure have suggested that this editorial decision supports their argument that the law amounts to “euthanasia.” This is not a term you will hear us use on 9NEWS. There is less uniformity in dictionary definitions for the word “euthanasia,” but all major dictionary definitions would cover a situation in which the patient has not been consulted about the decision to die. The proposed Colorado law would not authorize the ending of a terminally ill patient’s life without their consent. In fact, it requires the patient to self-administer the drug to end their own life.