Charlie Craig and Dave Mullins have been in a five-year legal battle with Jack Phillips, after he refused to make a wedding cake for their same-sex marriage. 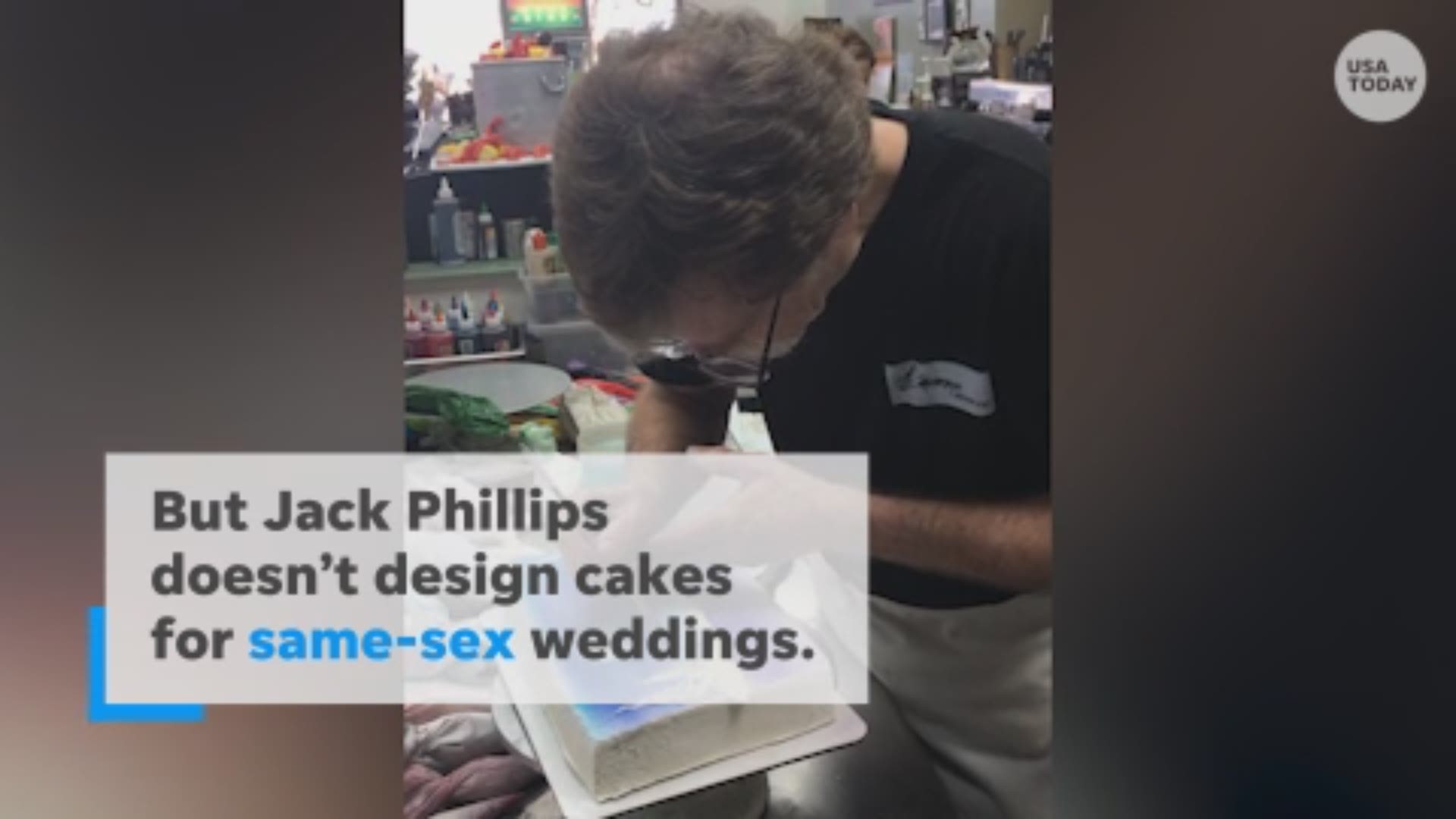 When Charlie Craig and David Mullins swung open the door to Jack Phillips' bakery on a summer day in 2012, they were just going to see a man about a cake.

Now all three of them are going to the Supreme Court — because, as it turned out, Masterpiece Cakeshop doesn't do cakes for same-sex weddings.

The five-year-old legal tussle over Phillips' confections and the gay couple's affections will reach its zenith next week, when lawyers for both sides as well as the state of Colorado and the United States come before the nation's highest court to debate the expressive content of a wedding cake.

In a Supreme Court term featuring potential landmark cases on voting rights, privacy rights, workers' rights and states' rights, it is the justices' third date with same-sex marriagethat's dominating the docket. It will test the Constitution's guarantee of free speech and religion against state laws prohibiting discrimination.

"I'm sure their feelings are as important to them as mine are to me," Phillips said one recent morning, taking a break from decorating cakes to speak with a reporter.

Charlie Craig and Dave Mullins were denied a weddinf cake for their same-sex marriage by Jack Phillips of Masterpiece Cakeshop.

"I want him to have his own religious beliefs and his own experiences and his own ideas,” Craig said later that day in his Denver home, surrounded by his husband, dog and cat.

Then Mullins quickly added: "But you cannot practice your religion in a way that denigrates others or excludes them from full participation in public life.”

The three men haven't spoken since their brief altercation on July 19, 2012, but next Tuesday won't be the first time they've met in court. Thus far, Craig and Mullins have won at the Colorado Civil Rights Commission and the state Court of Appeals. But the Supreme Court, bolstered in April by the addition of stalwart conservative and fellow Coloradan Neil Gorsuch, could be a different story.

In the interim, Phillips has lost an estimated 40% of his business because he's stopped making wedding cakes altogether. A workforce that once numbered 10 is down to four, including his daughter and sister-in-law.

Mullins and Craig have endured the initial pain and humiliation of being turned away, wedding binder in hand, as well as the residual impact of being alert to other forms of discrimination.

All because of a cake.

"I don't feel like we asked him for a piece of art," Craig said.

'We cried over this'

The couple, together that day with Craig's mother, planned to order a concoction suitable for celebrating their upcoming marriage in Provincetown, Mass. The party would be held back home in Colorado.

Craig, 37, had grown up in a small town in Wyoming and attended the state university where Matthew Shepard, a 21-year-old gay student, was murdered in 1998, so he usually was alert to discrimination. But on this day, his defenses were down.

"Just being a gay person in general, you’re kind of on guard when you go into public places,” he said. "That day, I dropped my guard.… It was particularly bad for me.”

“It’s embarrassing to admit that we cried over this, but it’s true," Mullins, 33, said. "The pain of being publicly rejected in that way, and feeling that you have no recourse — that this is just the way people are allowed to treat you because of who you are and who you love — is devastating.”

At the time, neither man knew that Colorado had a law prohibiting such discrimination based on race, creed, color, national origin, ancestry, sex, marital status, disability — or sexual orientation.

“It says something about where the state of gay rights was five and a half years ago," Mullins said. "When we left that bakery, it didn’t even occur to us that there was a law that protected us from what happened.”

Within days, they had made the decision to fight back. And as the wins piled up, so did their resolve. A final victory at the Supreme Court, Craig said, "would be sending a message that when you’re open to the public, you have to serve everyone equally.”

Defeat, Mullins said, could lead to broader discrimination — not only against LGBT people but others, such as interracial couples or single mothers.

“A loss at the Supreme Court could open the door to many forms of discrimination that have long been considered wrong in our society,” he said.

Both men agree their bond has grown stronger through the ordeal. They also sit in wonder at the prospect of having their case argued at the Supreme Court, a scenario "you read about in history books," Craig says.

But they wouldn't have it any other way.

“The kind of discrimination we experienced there harmed us," Mullins says. "And if it isn’t challenged, it harms our community as a whole.”

'Helped my faith to grow'

To see Jack Phillips at work is to watch a simple, white sheet cake blossom into an enchanted, blue and purple winter wonderland.

He has designed cakes like these for decades, combining his love of art and sculpture with his taste for textures and flavors. Delicacies on display at his Lakewood shop resemble penguins, lobsters, flower baskets and tropical islands.

“I just want to be an artist, and create artwork that’s actually edible,” Phillips, 61, said.

Since the civil rights commission demanded that he treat Craig and Mullins the same as other customers, however, he has subtracted wedding cakes from his repertoire, at considerable cost.

Gone is the full-time decorator and the full-time delivery man. Gone are four young women who worked with brides-to-be on busy Saturdays, before Phillips closed up on Sundays. In their place are security cameras, to guard against the type of harassment that resumed in June with news that the Supreme Court would hear his appeal.

“Financially, we’re just getting by, like day to day, paycheck to paycheck," Phillips said. "We’re just making enough to cover what we need.”

He continues to display awards from The Knot, the online wedding planner, and his own website still has a section on wedding cakes — with an unfortunate yet optimistic addendum.

"Masterpiece Cakeshop is not currently accepting requests to create custom wedding cakes," it says. "Please check back in the future."

Phillips believes firmly in his refusal to participate in gay and lesbian marriages.

“They’re asking me to use my artistic talent, my time, my energy, to create something special for their wedding," he said. "I feel that by my cake’s presence there, that people would say, 'Oh, he made that? He’s OK with same-sex marriage.'"

His voice cracked, as it often does, when he spoke about the "humbling" experience of representing other bakers, florists, photographers and graphic designers before the Supreme Court.

"It's caused me to examine what I believe and how I believe,” Phillips said. "It has really helped my faith to grow.”