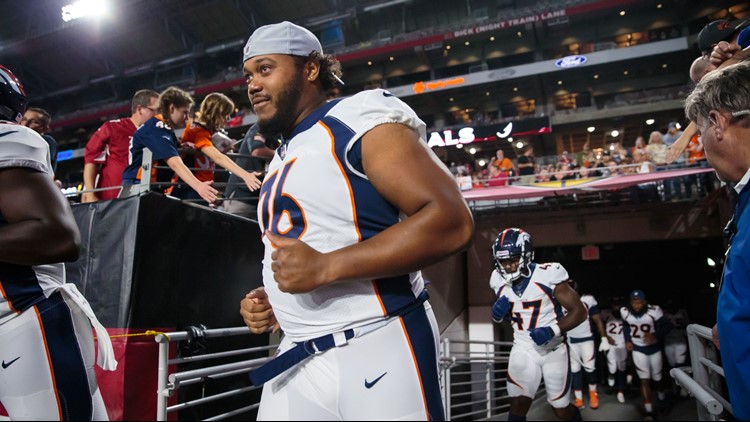 Bronco notes: Garcia to get playing time, no E vs. Q, Von self-critical

ENGLEWOOD — It appears Leonard Williams has helped Max Garcia get some playing time.

Garcia has been getting reps at right guard during practice this week after starter Connor McGovern had a tough time handling Williams, the New York Jets’ top defensive lineman, on Sunday.

“Both of those guys are really practicing well,’’ said Bill Musgrave, the Broncos’ offensive coordinator. “We know Connor had a super training camp, and Max did too, but there’s only five spots. Connor’s been starting, but Max is going to get some time. But we still need Connor in there, too, because he’s a terrific football player.”

Broncos head coach Vance Joseph said that while Garcia and McGovern are working at right guard, he wouldn’t declare which one would start Sunday against the Los Angeles Rams, who boast the likes of Aaron Donald, Ndamukong Suh and Michael Brockers along their defensive front.

Garcia rotated at both left and right guard with veterans Evan Mathis and Louis Vasquez in his rookie season of 2015, then started all 16 games at left guard in both 2016 and 2017.

McGovern played well enough that Garcia has yet to take an offensive snap through five games this year. But it does appear Garcia will get his first offensive snaps Sunday against the Rams, although not known is how many and in what order.

No Sanders and Talib matchup

Broncos receiver Emmanuel Sanders and former Broncos cornerback Aqib Talib went up against each other plenty in practice the previous four years. They will not be reunited at Broncos Stadium at Mile High on Sunday as Talib, who was traded to the Rams in the offseason for a draft pick, is on injured reserve with an ankle injury.

“Word from Chris is (Talib’s) bummed out he’s not going to play against me,’’ Sanders said, referring to a conversation he had with cornerback Chris Harris Jr. “I don’t really care. If he would’ve played or not, I still would’ve went out, done my job and made plays. Chris came in and was like, ‘Talib said that he’s upset he wasn’t playing against ‘E.’ Too bad, maybe next year.”

The Broncos have lost three games in a row and Von Miller has gone sackless in three straight games. Miller doesn’t think that’s a coincidence.

Miller, who had 3.0 sacks in the Broncos’ season-opening win against Seattle and one more in a week 2 win against Oakland, was extremely critical of his play during his weekly press conference Thursday.

Doesn’t Miller allow that offenses are game-planning – whether through double team blocks or quarterbacks getting rid of the ball quickly – to prevent him from getting to the passer?