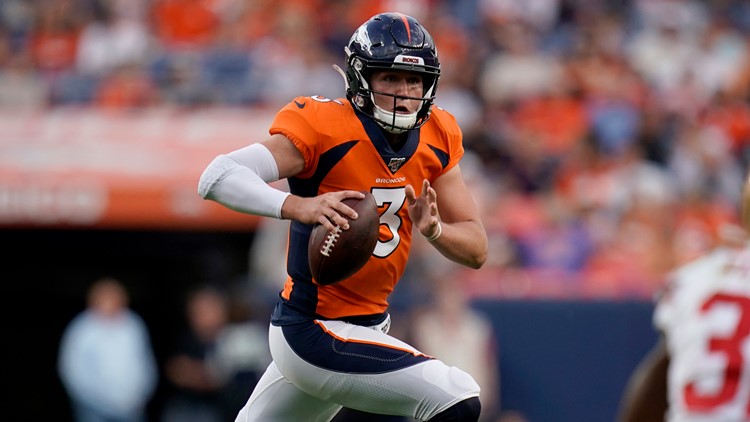 ENGLEWOOD, Colo. — The Broncos are about to hold an injured reserve audition.

Three players who have been on injured reserve (IR) since before the start of the regular season – quarterback Drew Lock, tight end Jake Butt and running back Theo Riddick – are eligible to start practicing Monday. They are also eligible to play in the Broncos’ week 9 game against Cleveland.

(It’s unclear whether these three players will be healthy enough to practice next week – Riddick, who is coming off a broken shoulder, respectfully said he couldn’t talk about it – but they are eligible.)

A fourth player on IR, receiver Tim Patrick, who suffered a broken hand in the opener against Oakland, is eligible to start practicing the following Monday, October 21. But because the Broncos are on bye the week he can return to play in a game, Patrick won’t be playing until week 11, Nov. 17 at Minnesota.

RELATED: Broncos defensive back De'Vante Bausby: 'I was paralyzed for the first 30 minutes'

Here’s where the audition comes in: A team can only activate two players from IR during the regular season. The other two will stay on IR the rest of the season.

Among these four players, Lock may be the safest bet to return, even though he might not play as the backup quarterback to Joe Flacco.

Still, players on IR can’t practice with the team, and the Broncos want Lock to at least get practice reps to further his development after they made him their No. 41 overall draft pick in the second round this year.

Lock, who has been out with a sprained thumb, started throwing a football last week. He was going through a personal workout on a back field while head coach Vic Fangio was holding his press conference Wednesday.

Newly acquired cornerback Coty Sensabaugh was asked if he would have a feeling of revenge this week as the Tennessee Titans were the team that drafted him and where he played his first four seasons:  “I’ve been unemployed for a long while this season, so it’s revenge for everybody.’’ …

Outside linebacker Justin Hollins is expected to be out a game or two after getting carted off the field Sunday with a knee injury but he was practicing on a limited basis Wednesday. …