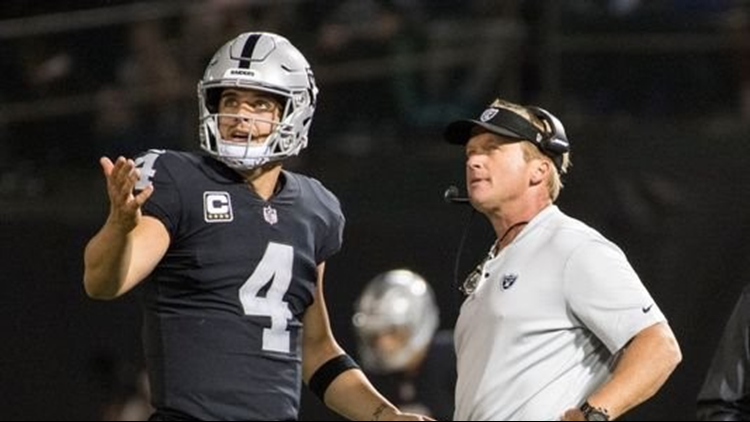 OAKLAND — The story of the prodigal coach returning home made for an inevitable centerpiece to the Raiders-Rams season opener on Monday night.

Jon Gruden, armed with a contract reportedly worth a record $100 million, was back where he first established his head-coaching bona fides, in a town that adored him, and one he loved back.

The man People magazine had once deemed one of the world’s 50 most beautiful people had ditched the comforts of the TV booth for the endless hours and scrutiny of guiding a storied NFL team.

The renowned quarterback guru was taking on a new project in Derek Carr, a talented four-year player who had regressed the previous season.

All those served as intriguing storylines, but at the end of the Rams’ 33-13 victory on Monday Night Football, the evening’s most notable figure was the one who wasn’t there.

A day after Khalil Mack’s spectacular debut with the Bears, which included a pick-six and a strip sack, the Raiders showed virtually no pass rush, and Los Angeles quarterback Jared Goff picked them apart in the second half to lead his club back from a 13-10 halftime deficit.

Mack, the 2016 NFL Defensive Player of the Year, landed in Chicago when the Raiders refused to meet his contract demands and traded him on Sept. 1 for two first-round choices and an exchange of lesser picks. In his absence, Oakland sacked Goff once and hit him just twice.

“When you can run the ball like they ran in the second half, it’s very hard to rush the passer," Gruden said. “Obviously we didn’t get to Goff enough, we didn’t get to (running back Todd) Gurley enough. We’ll take a good look at the reasons why we didn’t."

They certainly include the lack of an elite pass rusher, but Gruden has other issues to address as well if he hopes to turn around a 6-10 team.

Leading running back Marshawn Lynch is 32 and, while still capable of bowling over defenders as he did in capping the game’s first drive with a tenacious 10-yard touchdown run, Lynch no longer eludes or outruns many opponents.

The receiving corps has a potential star in Amari Cooper, but he also took a step back last season and pulled in just one pass for 9 yards Monday.

And Carr had an up-and-down season debut, with 303 passing yards but no touchdowns and three interceptions, the final a pick-six that mostly added salt to the wound after the outcome had been decided.

“He did some good things tonight. Obviously, there are some critical errors we have to eliminate," Gruden said. “One of them wasn’t his fault. He got fooled by one of our own receivers. We have to do a better job of coaching. It goes on me."

Carr has been a dedicated student under Gruden since the coach arrived in January and knew this game carried extra expectations because of his presence.

Carr said he and his teammates avoided getting caught up in the game’s hype, and were mostly disappointed because they didn’t perform up to their expectations, not because they let Gruden down.

“I can tell you this, losses with Coach Gruden feel a little bit different than I’ve ever felt before," Carr said. “Just the positive coaching, the next step, demanding what he needs from you next time. I just talked to him for 10 minutes and I already feel like we’re going to be better next week."

They better if the Gruden lovefest is going to last, especially considering the adverse reaction to the Mack trade. By the early part of the fourth quarter Monday, many in the crowd of 53,857 rained down boos when the offense stalled as Carr lofted a pass in the general direction of nobody.

With their superstar coach back in the fold and just two years left before they decamp for Las Vegas, the Raiders have taken a different approach to building their team than the Rams, who endured a 4-12 season upon their return to L.A. in 2016.

That was also Goff’s rookie season after being selected No. 1 in the entire draft. The Rams had added Gurley the year before as the 10th overall choice, so their offensive anchors are 23 and 24, respectively. In late August, the club signed top-notch defensive tackle Aaron Donald, 27, to a six-year, $135 million deal, briefly the largest ever for a defensive player.

By contrast, Oakland is going with a more veteran squad and refused to budge on Mack, who replaced Donald atop the defensive salary scale when he got a six-year, $141 million contract from Chicago.

ESPN reported Monday the Rams offered Oakland first- and third-round choices for Mack, whom they planned to keep for just a year to line him up alongside Donald, Ndamukong Suh and Michael Brockers in a defensive front that could have revived memories of the Fearsome Foursome.

Regardless, as a coach who shares personnel decision-making power with general manager Reggie McKenzie, Gruden is seen by fans as a major force in the Mack decision.

Joel Clark of nearby Berkeley, a season-ticket holder since the Raiders returned from Los Angeles in 1995, said he was “ecstatic" when he found out about Gruden coming back, and “pissed off" when he learned of the Mack trade.

He expects Gruden to guide the Raiders back to prominence and says, “I love Gruden to death. I think he made a mistake (with Mack), but overall Gruden’s going to be very good for us and I’m still going to support him. He doesn’t realize the mistake he made."

For now Gruden gets a pass, but he might be wise to remember those fourth-quarter boos weren’t just directed at Carr.