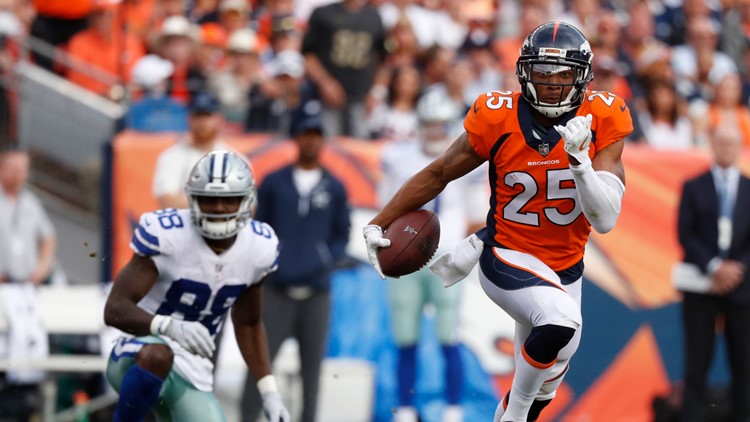 Photo by: AP Photo/Jack Dempsey, File
This Sept. 17. 2017, photo shows Chris Harris intercepting a pass intended for Dallas Cowboys receiver Dez Bryant during the second half of an NFL game in Denver.

Chris Harris Jr. on Broncos: 'It can be salvaged'

ENGLEWOOD, Colo. — The Broncos are listening to trade offers for cornerback Chris Harris Jr., but the team “won't give him away,’’ a source told 9NEWS.

Perhaps, there is a chance Harris will stay put and play for the Broncos in 2019.

“Oh, yeah, definitely,’’ Harris said in an interview with 9NEWS on Wednesday afternoon. “I want to be here so we can salvage it.’’

Asked how his tenuous relationship with the Broncos can be salvaged, Harris said: “You know how.”

Harris has skipped the first four weeks of the Broncos’ offseason program – including the team’s voluntary veteran minicamp last week – because he is not happy with his contract that has $7.9 million in 2019 payout remaining.

Harris, who turns 30 in June, is seeking to become the NFL’s highest-paid cornerback, a status currently held by Washington’s Josh Norman with a $15 million per year average.

Broncos general manager John Elway said during his pre-draft press conference Tuesday that he would talk with Harris after the draft, but that didn’t mean he would do a new deal.

A couple hours later, Harris’ agent Frederick Lyles informed the Broncos his client’s asking price is more than $15 million per year and if the team won’t meet his request then he wanted to be traded.

A source told 9NEWS one team inquired about Harris earlier this week, before the situation took a turn Tuesday.

Harris had been in Dallas training, but he is now back in Denver with his family continuing his workouts.

“I don’t have any hard feelings about anything,’’ Harris said. “I always wanted to retire here. It’s not me. It can be salvaged.’’

PREVIOUS: Chris Harris Jr. to Broncos: 'Pay me or trade me'