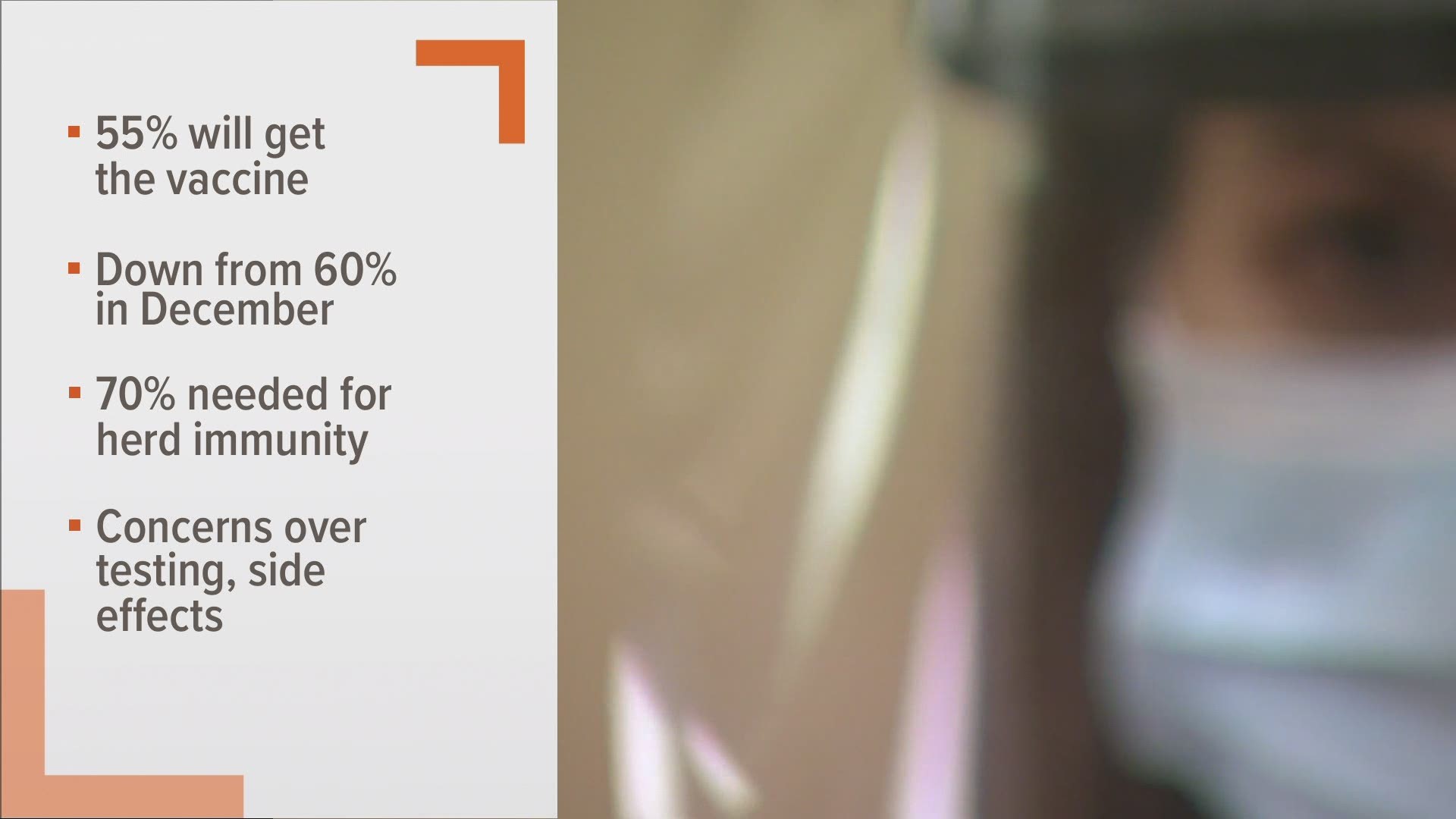 COLORADO, USA — A newly-released report reveals Colorado voters' attitudes toward a range of issues related to the COVID-19 pandemic.

The survey by Magellan Strategies seeks to measure and understand voter opinion in seven main areas, the firm said, four of which were released Friday:

The top response to the survey's question about the most important issues and problems Gov. Jared Polis (D-Colorado) and the state legislature should be addressing was jobs and the economy, at 24.12%. The second-highest priority identified by the survey's 769 respondents was the vaccine rollout, at 19.85%, followed by the coronavirus at 17.46%, opening businesses at 15.83%, and schools and education at 13.19%. Other responses include homeless issues, healthcare, mask policies, climate change and environment, and crime and safety.

The majority of respondents, 55%, said they either will or probably will get the vaccine when it becomes available to them. Another 34% said no or probably not, while 9% were undecided and 2% refused to answer.

The survey revealed a partisan divide in several areas, including the vaccine. Of Democrats surveyed, 88% said they would get it, compared to 29% of Republicans and 24% of people who voted for Donald Trump. Of unaffiliated voters, 57% said they plan to get the vaccine.

When those who said they would not get the vaccine were asked why, many said they were concerned that it was not tested sufficiently and may cause side effects, while others said they did not believe it is even necessary. Those who were unsure gave similar responses.

RELATED: VERIFY: Yes, COVID vaccines do meet the definition of a vaccine

Government's handling of the pandemic

Overall, 59% of those surveyed disapproved of the federal government's handling of the pandemic during the Trump administration. Another 39% said they approved, while the remaining 2% were unsure or had no opinion.

However, 83% of Republicans said they approved of the Trump administration's response to the pandemic.

When asked how they felt about the Biden Administration's response, 53% of respondents said they approved, while 36% did not. Another 11% were unsure or had no opinion. Among Democrats, 83% said they approved.

The survey also asked about voters' opinions of the state government's response to the pandemic. Of those who responded, 56% said they approved of the job Gov. Polis is doing, while 37% did not. Another 7% were unsure or had no opinion. Of Democrats, 79% approved, while 28% of Republicans approved.

The majority of respondents, 52%, said they approved of the job their county government was doing to respond to the pandemic, while 36% disapproved and 12% were unsure or had no opinion. Of Democrats, 58% approved, compared to 43% of Republicans.

Concern about the coronavirus

The survey was conducted from Feb. 9 to Feb. 17. and is intended to be representative of the demographics of Colorado's registered voter population, according to Magellan. More information is available here.

Magellan said the other three areas addressed by the survey will be released in about a week.